Not many can take him down on home soil, but I guess when it comes down to a Tour Professional and ‘local amateur veteran’, I guess the Tour Professional supersedes.  But it did take 23 year old Devin Carrey 37 holes to make it happen this past weekend at the Golden Ears Invitational at Pitt Meadows Golf Club.  Carrey fired rounds of 70, 69 in what would be deemed ‘PGA Tour’ pin locations for both days, good for the victory and a $2,200 winner’s cheque.  Carrey’s opponent in the playoff was Pitt Meadows ‘Legend’ Gudmund Lindbjerg, who needed both birdies on 17 and 18 on the final day to take Carrey to a playoff.  Carrey would eventually win on the first hole of the playoff when Lindbjerg missed a short putt for his par.  Lindbjerg would be crowned Low Amateur for the event, a title that he is no stranger to whatsoever. 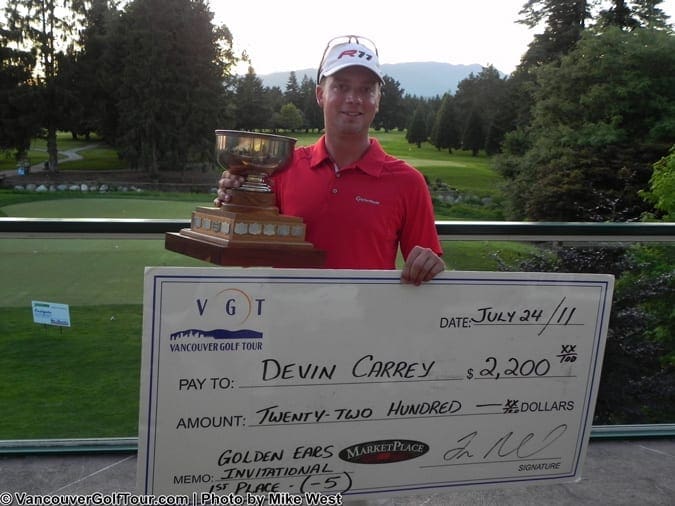 The 2011 Golden Ears Open Champ Carrey has been travelling out on the Canadian Tour for his second season this year and has been making most of the cuts this year, but yet to have that big breakthrough event.  Carrey’s 2010 season on the Can Tour was definitely his best to date, finishing in 7th place and taking home a cheque for $10,075.00.  He currently sits 38th on the Can Tour Order of merit through 7 events and will head back to Ontario for the last couple of Can Tour events to find his first big ‘W’ on the tour.  Carrey sits in 9th place on the VGT Order of Merit after only playing in 4 events, the last three of which have been top 5 finishes.  Signs of good things to come in his final two Canadian Tour events no doubt!

Thanks to Frank Hoadley and Steve Chapman and the Pitt Meadows Golf Club for their extraordinary efforts throughout the weekend making this year’s Golden Ears Invitational a great event.  The golf course was in great shape thanks to the efforts of superintendant Dave Zeiler and we can’t thank Pitt Meadow’s Head Professional Neil Roberts and GM Michael Pierce enough for the outstanding service they provide throughout the weekend for all competitors.

Neil, Michael, Frank, Steve and the whole Golden Ears Invitational Committee, you can all pat yourself on the back for taking the time to invite a young golfer on the Vancouver Golf Tour without any CPGA or Canadian Tour status to come and play your event in 2009.  As you can obviously see, the experience that Adam Hadwin was able to have at your event (which he ended up winning in fine form at -12) gave him the path to least resistance on his journey to the Canadian Tour in 2010, and to the present where he recently strode the PGA Tour fairways at the RBC Canadian Open.  It was no doubt a thrill for all of us at the Golden Ears Open watching the 2009 Golden Ear’s Champion coming within a couple of strokes of being the 1st Canadian in 57 years to win his own National Championship on the PGA Tour!

Thanks for being involved with the Vancouver Golf Tour and believing that these exact experiences we are providing do in fact make a difference to young golfers’ lives in their quest to become PGA Tour Champions!