Complimenting a hole-in-one on his 3rd swing of the day with an eagle and 6 birdies, 23 year old Canadian Tour rookie Adam Cornelson shot a blistering round of 63 to win his first Professional tournament by 3 shots over Kings Links Professional Jeremy Paradis.  Cornelson’s first place winner’s cheque was a nice $2,000 and he also earned 1,500 points on the 2011 CLEVELAND/SRIXON Order of Merit to move him up to 3rd place in the CLEVELAND/SRIXON Professional Division of the 2011 race and 8th place overall.  Paradis picked up $1,400 for his second place finish, which is his top finish in the 2011 VGT calendar year, moving him into 6th place in the Order of Merit. 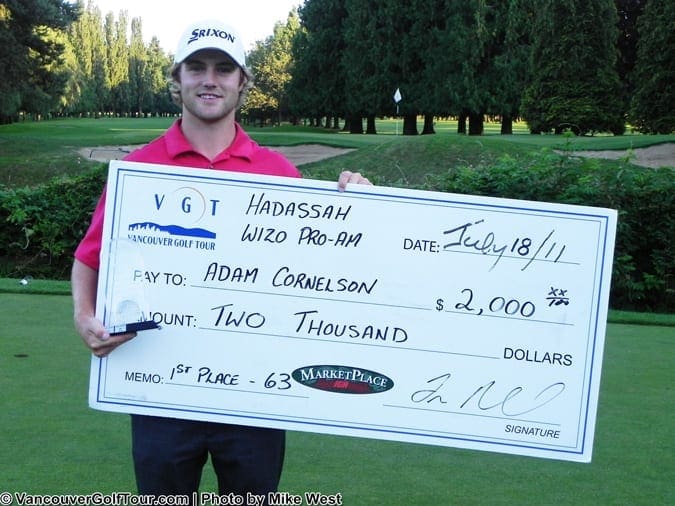 In an interview after the tournament, Cornelson attributed a lot of his success to his grandmother for guiding him in his junior and amateur career.  Looks like grannie’s done a fine job mentoring this young pro!  Cornelson has had some successes as an amateur while a member at Vancouver Golf Club, winning 3 consecutive club championships from 2008-2010.  Adam also gave credit to the VGT for giving him a chance to win as an amateur, which he did once in 2009 – as Overall Low Amateur at the ’09 Vancouver Open Championship and twice in 2010, winning Low Amateur Honours at the VGT Swan-e-set Classic and the Nickel Heating open at Ledgeview.

Cornelson’s Professional debut came at the 2010 Vancouver Open, where he made the cut and finished t21st.  He made his way down south in the winter to play some mini tour events and then successfully qualified for the Canadian Tour at the California Winter Qualifying School.  Adam has been learning a lot out in his first year on the Canadian Tour, making four cuts out of the 8 events he has played, with two top 30 finishes.  He plans on playing the final few events on the Canadian Tour schedule before heading back to Vancouver to play in the 2011 Paine Edmonds Vancouver Open on Sept.2-4th.

Many thanks need to go out to the tireless efforts put into the 2011 Hadassah Wizo Charity Pro-am.  All of the dedicated women on the Hadassah Wizo Charity Pro-am committee and all of their trusted volunteers who helped with registration, set-up, hole-spotting and group scoring are to be commended on another fantastic event.  You should be all be very proud of the time and energy put into this event and the results are amazing.  For 29 years you have not only supported the golf community by helping the PGA and now VGT Professionals have a place to play and learn to win locally, but you have continued to raise the bar for the fundraising you do each and every year for the two charities involved – the Hadassah Hospital in Jerusalem and the Prostate Centre at the Vancouver General Hospital.

Our thanks must also go out to the Richmond Country Club and their team of staff members who make this event such a professional event year-to-year, right from the time you walk into the facility and leave after a wonderful dinner.  The golf course is always in unbelievable condition every year we play and the pro-shop service from Derek Thornley’s staff and food and beverage we receive throughout the day is second to none!

Thanks for being a part of the Vancouver Golf Tour schedule for 5 straight years!!!  We look forward to many more successful Pro-ams with the Hadassah Wizo in the years to come!