It may have taken over 7 years from his first ever Professional win on the Vancouver Golf Tour.  But one thing is for sure, Adam Hadwin is the real deal, winning on every single level on his way to his first PGA Tour win this weekend!!

Since his first local Pro win at the 2009 Ledgeview Open Adam Hadwin turned heads.  Mine included as I got a first hand glimpse of who Adam Hadwin was and how talented a player he is when he laid down a beating on me in the first round of the event.  It wasn’t that he waxed me by 11 shots that day with his ho-hum 63.  It was how he did it.  He drove the ball with power AND control.  He hit it in places I’d never seen (or considered) before.  Where I was hitting long iron or fairway wood into par 5’s, he was hitting 8 and 9 iron.  He walked with confidence and played with confidence.  He managed his game and yet wasn’t afraid to challenge pins when the time was right.  But one of the biggest things I remember taking away from that day was saying “Man that guy can putt”.  Had he not dumped a 9-iron on our last hole on the par 5- 9th hole, it could easily have been 61.  I went home Sunday night after Adam was presented with the trophy for his first ever Pro win, and thought to myself “This guy has IT”.  All the skillsets of a Tour Player, the self confidence and a tremendous short game, particularly the putter.  And it wasn’t long before he continued to prove us right, going on to win three more times on the Vancouver Golf Tour and another 2 runner-up finishes.

In the eyes of myself and many regular VGT players (pro and amateur), we knew Adam Hadwin had something special to be able to come out and dominate so quickly on a tour that had some truly great Professionals in the fields like Phil Jonas, Bryn Parry, Stuart Anderson & Ryan Williams.  Adam continued to prove us right when he took the confidence from his breakout season on the VGT, and won a big event down at the Gateway (mini) Tour Winter Series event.  The prize: A winter season of Free entries to the tour valued at $15,000 USD.  Anything he made that winter went into his pocket with no entry fee expenses, and he took full advantage of it.  By the time spring rolled around he was full of confidence (and cash) and easily earned his card on the then Canadian Tour.  By the end of 2010, he had earned a birth into the RBC Canadian Open finishing T37 (top Canadian) and then finished t33 at the Gretzky Invitational (Nationwide Tour).  He returned home in September where Vancouver locals got to witness Adam’s PGA Tour caliber play where notched the first of 3 Vancouver Open Titles, VGT’s flagship event.  The confidence continued to soar for Adam when he took home his first Canadian Tour victory down in Palm Springs at the Desert Dunes Classic.

It has been a great honor to see Adam’s game mature with the years he came through the VGT and see it continue to evolve as he won for the 2nd time on the Canadian Tour in the spring of 2011,  then go onto qualify for his first Major at the US Open at Congressional, finishing t39, and then continuing to get more confident in PGA Tour events when he caught the nations attention at the 2011 RBC Canadian Open at Shaughnessy where he finished T4th.

This really was his breakout season in Professional Golf, earning a spot into the Greenbrier Open the following week where he had another solid finish t32.

When Adam announced he would come home again to defend his Vancouver Open title, this truly was an exciting time for local fans to come and watch a rising star play in his backyard without ropes especially after such a dramatic run at Shaughnessy.  Well, he didn’t disappoint, winning in a playoff over Chilliwack Pro Brad Clapp with a driver 6 iron on the par 5- 18th hole at Fraserview Golf Course in front of 500+ fans.  He continued to impress both Canadians and US fans when he took full advantage of a sponsor’s exemption into the Frys.com event in California where he finished T7th.  In 2011 Adam Hadwin had truly made his mark! 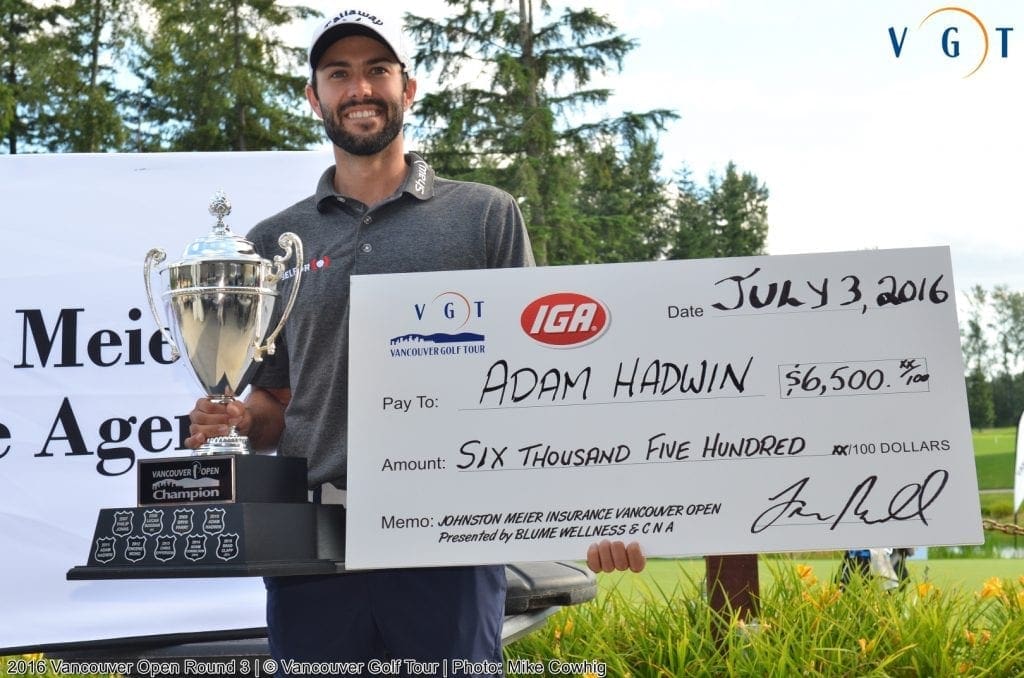 I would say the rest is history, but at this point his Professional career was just starting to take off by the end of his 3rd year.  But to make a long story short, Adam’s rise from his days playing Zone 3 BC Junior and Amateur Golf, Maple Leaf and CJGA Tour events to his College days at Louisville, and into his first season of local Professional golf on the VGT gave him a pathway to prepare himself for bigger tours.  First the Canadian Tour (2 wins), then the Web.com Tour (2 wins) and now the PGA Tour (1 win).  Each step of the way he learned how to win.  He may have had the odd set-back such as in his 2nd year on the Web.com, but he quickly learned that continuing to work even harder at all aspects of his game would make him the confident player he has always been to be successful AND WIN at any level.

So seeing Adam win his first PGA TOUR event this weekend at the Valspar was not a shock to me.  Or to many of his followers who have followed his journey from the beginning.  It was probably more a shock that he hadn’t won sooner in one of the 4 occasions he was in the final group.

I was privileged to see Adam’s development from his early Professional days to now, but I know there are many who have seen his progress from an earlier time in Amateur and even junior golf who would probably attest that they knew he had something special in him to make it to the PGA Tour and win.  Well they were all right!

Congratulations Adam, Jessica and the whole Hadwin Team on your first of many PGA Tour events!  We have your back and believe there will be many more to come on the horizon!  Enjoy the Arnold Palmer Invitational as a PGA Tour winner and the challenge that lies ahead after you and Jessica tie the knot…..

Playing with your wedding ring on!

Enjoy your stroll down Magnolia Lane and getting your opportunity to chase down the title of being the 2nd Canadian to don the green jacket!

PS:  I hope you got your honeymoon deposit back!