After a rained-out Saturday, the 2012 Ledgeview Open was turned into an 18-Hole Shoot-out on Sunday for all 162 competitors.  Competitors would be playing for the chance to be listed on the coveted Winner’s Trophy alongside some big names such as Ray Stewart, James Lepp, Nick Taylor, Bryn Parry and Adam Hadwin, as well as a $2,000 winner’s cheque for Pros and 2,500 points on the Cleveland / Srixon VGT Order of Merit in each handicap division.

At the end of the tournament it was VGT’s most consistent top player Bryn Parry who pulled off his 2nd straight Ledgeview Open Title, shooting a spectacular round of 66 (-4) on the day, making it his fifth Ledgeview Open title in the past 8 years and his 15th Professional win at Ledgeview, including the 2006 BC Assistant Pro Championship and a number of Pro-am and single day VGT Pro-events. 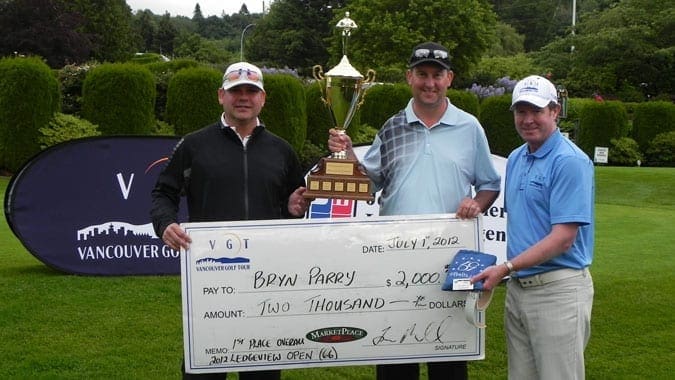 Interviewed after the round, Parry remarked that it was a You Tube video done by fellow pros James Lepp and Josh Taylor that gave him the right mindset of how much spin the greens were going to be putting on full swing shots on the day.  He took this insight to the range the next day and a half to work on softer iron shots and wedges to control the amount of spin on his ball, which obviously paid off.  When he dropped 2 balls onto the putting green before his round on Sunday, the reaction of one ball plugging and the other picking up a bit of mud re-enforced how he would need to get his ball close to the hole from around the green – which he did!

‘I hit four spectacular short game shots around the green that probably saved me 4-6 shots on the day.  I ultimately adjusted very well to the golf course conditions and it really worked out in my favor with the win today’ stated the 4-time VGT Order of Merit Winner Parry.

In a detailed account of his four miraculous shots, Parry pitched his ball all the way to the back pin on hole #5 from 40 yards out, and it one hopped, and trickled into the hole for eagle.  Then after a side-ways drive on #7, he pitched out to the fairway and with a good visual from his shot on #5, he pitched from the same distance from the green, to within 4 feet of the cup, and it spun directly sideways into the hole again, this time for birdie.

Then after seeing (Ray Stewart) his playing partner’s bunker shot on #11 release only a foot forward, he made the  decision to fly the ball right to the hole, and it  paid off as it stopped in its tracks 3’’ from the cup.  Parry still says his best shot of the day came on the par four 16th when his pitch shot from 45 yards ended up just 7’’ past the hole for a tap-in par.

With his win, Parry racked up 2,500 points on the CLEVELAND/SRIXON Order of Merit, vaulting him back in the leader position over 2nd place Nick Taylor and 3rd place Ryan Williams, both on the Canadian Tour this week.  With 7 events remaining to decide who wins the $5,000 PGA Tour Q-School entry, Parry leads Taylor by 1,500 points and Williams by 2,200.

Ultimately Parry needed all the short game imagination he could throw at his opponents as this year’s runner-up, 13-year old amateur Jae Wook Lee came within 2 shots of Parry, shooting an amazing round of 68 (-2) on the day.  Although he came up 2 shots shy of a playoff to decide the Overall Champion, this youngster from Pitt Meadows stamped his name on the local golf scene in a big way, winning the overall Amateur Title by one shot over Vancouver Golf Club’s Brendan Dillon and Ledgeview’s Dean Reddicopp.  Lee is no stranger to the winner’s circle on the VGT though, as back in February he finished runner-up at Mission and tied for low Amateur honors at the Belmont event on VGT’s Winter Tour, both times shooting 72 from the back tees.  Lee was using the VGT event as a warm-up for the BC Junior and Canadian Junior Championships later this summer.  Keep your eyes open for this bright young junior golfer!! 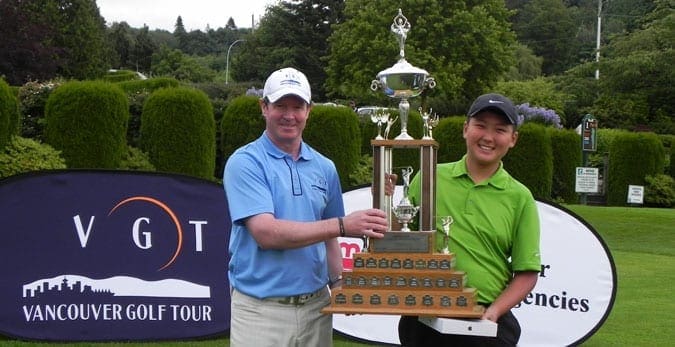 Overall Low Net in the tournament went to Ledgeview’s Dean Reddicopp, who scored a net 66 on the day.  Both Lee and Reddicopp took home APPLE IPAD’s for being Overall Low Gross and Low Net winners!   Professionals and amateurs were playing for a total prize purse of $20,000 thanks to Presenting Sponsor Johnston Meier Insurance and a host of supporting and hole sponsors that contributed to the tournament’s success.

VGT would like to personally thank the Ledgeview Golf & Country Club for continuing to support the development of golf and the local golf scene through its partnership with the Vancouver Golf Tour.  The tournament opportunity Ledgeview Golf & CC provides to the players in this event allows players of all ages and abilities to aspire to greater heights in their games, many of whom are looking to compete at Provincial or National amateur events this year.  And for our Professionals, an opportunity to have another superbly run tournament on the VGT schedule, which every year is becoming the proving ground in Western Canada to make it out onto the Canadian Tour, WEB.COM (Nationwide) Tour and PGA Tour.

The amount of hours that go into the co-ordination of an event this size is endless.  Every single team member of the Ledgeview Golf & Country Club should be congratulated on a hugely successful event!  Ledgeview’s General Manager Chris Hood and his pro-shop, clubhouse staff and maintenance team came through once again to host one of BC’s Premier OPEN Championships.  Although the weather did not co-operate leading up to the event, ultimately forcing day one to be cancelled, the golf course was in amazing shape on Sunday, considering the obstacles mother nature threw its way.

We look forward to working with Ledgeview Golf & Country Club later in July for our fourth stop to Ledgeview this year at the RBC Dominion Securities Charity Pro-am.   Thanks for being such a huge supporter of BC Golf!!!

For an update of the CLEVELAND/SRIXON VGT Order of Merit Leaders in each flight as of the end of the Ledgeview Open, please CLICK HERE.