(June 13, 2012 – Pitt Meadows, BC) –  History (in a VGT way) was made today as one of Canada’s brightest young Professional golfers Nick Taylor claimed his first Professional win on the Vancouver Golf Tour since turning Professional in the fall of 2010.  Taylor fought through driving rain and wind for the greater part of the day on a 7,000 yard Swan-e-set Resort layout which ‘seemed to play more like 8000 yards’ as Taylor would later attest to in his post round interview.

Taylor’s incredible play, which we all witnessed in his Amateur career (twice qualifying for the US Open, Top Ranked Amateur in the World for over 20 weeks) has made the same development in his young Professional career as of late.  Today’s victory on the Vancouver Golf Tour was not a surprise to many, particularly VGT’s Commissioner Fraser Mulholland.  “Nick has been getting the job done on a few different tours the past year, including three top 10’s on the Canadian Tour (most recently a t7th at last week’s Victoria Open),  three second place finishes on U.S. based mini tours and a recent win at the All American Tour Championship this spring. 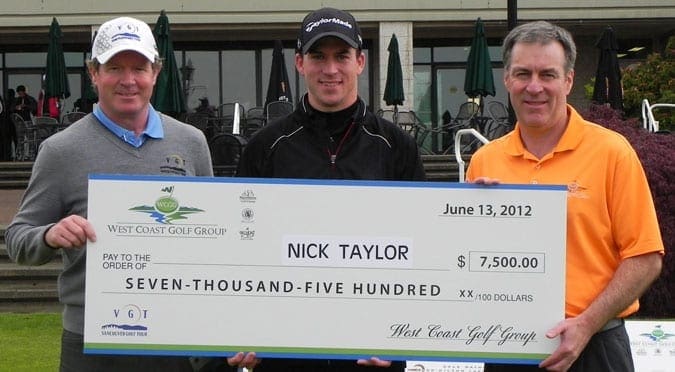 Although Taylor admitted he didn’t have his ‘A game’ today, he did manage to make the tournament a bit more dramatic when he hit two great shots on the difficult 18th hole to 12 feet, and nailed his birdie put for a one shot victory over Texan Pro Creighton Honeck, who fired one of the low rounds of the day with a 68.  Honeck was disappointed to have squandered a short birdie putt on his second last hole, but overall was happy with his play this week, and very impressed with the event, and how hospitable everyone in the West Coast GG event was to him the whole week.

Taylor and a bunch of the Canadian Tour regulars who played the WCGG event will head up to Kamloops tonight to prepare for a similar Pro-am event hosted by the Canadian Tour at Sun Rivers Resort.  As attested by Taylor, “The West Coast Golf Group event was a very handy stop on the way through to the next Can Tour event.  It fills the void in the Can Tour schedule for both local players and some international Can Tour players to stay sharp and win some great cash before heading to Edmonton.  “It’s been great to have the VGT there for me in the spring months when I am back in town from playing down south before the Can Tour starts up.  The caliber of play on the VGT has got stronger and stronger the past few years and has made it harder and harder to win each year.  Fraser and his team run a series of great events – it’s great to have in our area for sure”.

The Canadian Tour’s next stop gets underway June 18-24th at the Windermere Golf Club, site of the ATB Financial Classic.  Last year’s Champion Hugo Leon, also a big hit in Big Break Michigan was in attendance for the WCGG event.  He will no doubt use his T4th finish to boost some confidence coming into next weeks’ Can Tour event to try and defend his ATB Financial Classic Title.

The top 20 and ties advanced to today’s final round at Swaneset.  West Coast Golf Group Teaching Professional Phil Jonas struggled in his final two rounds during the event after opening with a solid round of 67 at Belmont.  His final two scores of 76 at Hazelmere and 75 at Swan-e-set dropped him down to a share of 15th place with 4-time VGT Order of Merit Champ Bryn Parry of North Vancouver.

With Taylor’s win, he is the first Professional in 4 years to knock Parry off the #1 spot on the CLEVELAND/SRIXON ORDER OF MERIT after June 1st.  With a fine showing this week, Vancouver Golf Club’s Matt Makinson climbed into 3rd place on the VGT  Order of Merit with a T4th showing.  He sits only 1,000 points behind Parry, and 2,000 points behind Taylor through 8 Professional Order of Merit events this year.