This weekend on the VGT was the 36 – Hole TIFOSI EYEWEAR Spring Amateur Championship at Northview Golf & Country Club featuring 86 Amateur Golfers ranging from a factor of +2 to the high of 18.0.  At the end of 36 holes, 22 year old David Rose was crowned champion with scores of 68, 73 (141).

Day one – Sunny and 18 degrees

Right from the start, players were treated to a premier pair of TIFOSI sunglasses courtesy of G&G Company, featuring some of the most radical designs specific to golfers’ needs.

The first round was held on Northview’s Ridge Golf Course, home of the PGA Tour’s Air Canada Championship from 1997 to 2002.  The golf course was set up in absolutely mint condition and players from all flights took full advantage of the scoring conditions.  After day one, West Van’s David Rose was the clubhouse leader after a solid round of 68 (-4), four clear of five players, including three time Amateur VGT winner Brendan Dillon.  Rose’s round started out fairly lack-lustre until a nice birdie on 9th hole, and he finished in style with four birdies in the last 5 holes to shoot 4-under par.  Dillon’s round on the other hand was almost a reverse look of Rose’s card, getting his round to 3-under par thru 10 holes before bogeys on 13,14 and 18 left him at even par after round one.

Through round one, Flight A and B leaders were Simon Eisler (A) and Pete Fung, who shot gross scores of 76 and 74 respectively.  Both players went into day two with significant leads in their flights.

Round two turned out to be a battle of the elements on Northview’s Canal course.  Flight B and A groups led off, and both Eisler and Fung continued their great play, carding 75 (Eisler) and 82 (Fung) to win Overall Gross scores in their flights, Eisler by a whopping 15 shots and Fung by four shots.  Dale Holtz took home Low Net honours with scores of 77, 72 net in Flight A and Bently Taylor won Flight B Low Net with scores of 70, 66 to win by 5 shots.

Championship flight leaders were the final groups to tee-off, and weather really started taking its toll on golfers’ patience, as well as their ability to keep their equipment and bodies dry.  Fraserview’s Brandon Moreau was first and only Championship golfer to come in with an under par round on the day, making him the early clubhouse leader at 74, 71 (+1) with only a couple of the lead groups to come in.   Vancouver Golf Club’s Dillon was making a small charge of his own on the leader, finishing the front nine at -1, and making another birdie on 14 to get to -2 for the tournament.  But bogeys on 15 and 17 cut Dillon’s chances and he would finish the tournament at even par.

The lead group consisted of current BC Amateur Champion David Rose and local amateurs Stephen Jenkins, Joey Lemieux and Callum Miller. While Rose did fall back one shot thru 9 holes, none of the challengers put down a charge on the day, so it became a two man race with Dillon waiting at even par to see if Rose could withstand the weather and pressures of the back 9.  And although a quick bogey on the 10th hole put Dillon within one shot of Rose at the time, Rose’s steady play and a birdie on the final hole sealed the 3-shot victory.

Rose won himself a Toshiba Satellite Pro laptop for his victory as well as 2,500 points on the CLEVELAND/SRIXON Order of Merit.  Dillon took home a CLEVELAND BLACK Driver for finishing 2nd overall.  Flight A and B Gross Winners took home some sweet BUSHNELL Rangefinders! 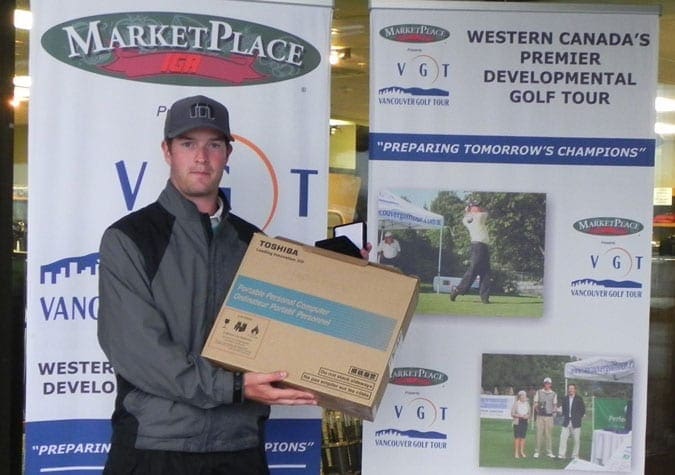 Rose’s victory was his first on the VGT this year after playing in only one other event in April where he finished 8th.  Rose will represent Team BC in an international golf event in Mexico at the end of this month and return to prepare for his title defence of the BC Men’s Amateur on July 24-27th at Swan-e-set Resort.  He plans on playing a few more VGT events leading up to the BC Amateur and is considering his planning his professional debut at the PAINE EDMONDS LAWYERS Vancouver Open Aug.31st – Sept.2nd.

Dillon’s 2nd place finish keeps a stranglehold on the lead on the ’12 CLEVELAND/SRIXON Championship Amateur Order of Merit, now over 1,500 points ahead of Connor O’Dell and 2,000 points over Joey Lemieux.

After a decent 5th place finish in Flight A, Kevin Griffin separated himself from 2nd place Murray Reed by over 1,700 points after Reed struggled with a 19th place finish.  And in Flight B, Bently Taylor’s Low net win pushed him just a top of 2nd place Robert Parihar by a mere 150 points.

Once again, no-one won the JOHNSTON MEIER INSURANCE $5,000 HOLE-IN-ONE prize offered on both days, but the closest shot in each flight took home some fashionable golf shirts courtesy of FENIX GOLF APPAREL.

Our continued thanks to the outstanding work put out there by the VGT Team members Holly Pearson (registration/on course support), Mike West (set-up/on course support), George Sterling (set-up/rules), Ray Porter (set-up/starter), Matt Friesen (set-up), Brian Small and Bill Schabes (Live Scoring).  Those long hours are not easy and you are all to be thanked for your incredible support of our tour’s development!

Special thanks to Gord, Cori and Brad German and Derek Orr from G&G / TIFOSI Eyewear for supporting our tour and its mission of developing golfers in our region.  Players were super pumped when they saw their fabulous TIFOSI sunglasses at registration!!!

Our thanks go out to Northview Golf & Country Club for helping on all accounts with our event.  The golf course was in as good a shape as players could imagine, reminiscent of those seen on the PGA Tour when the Air Canada was held!