Forty-year old North Vancouver Professional Bryn Parry was up to his regular self again on the Vancouver Golf Tour yesterday, carding a flawless round of 5-under par 67 on a stretched out Royalwood Links course measuring over 7,000 yards.  Parry used his veteran like experience to card five birdies and not a single bogey on the day on his way to a 2-shot victory over Canadian Tour Pro James Allenby who heralds out of Royalwood himself!  Allenby’s card was a bit more adventurous, as his card was dotted 6 times with birdies on 2,6,10,14,15 and 17, but traded off bogeys on 3,4 and 11 to shoot 69 on the day.  Parry too home $1,000 and Allenby a cheque for $725, and both earned valuable points on the 2012 CLEVELAND/SRIXON ORDER OF MERIT.  Parry vaulted his way back to the #1 spot over last week’s winner John Shin, who carded a decent round of 72, for a t7th place. 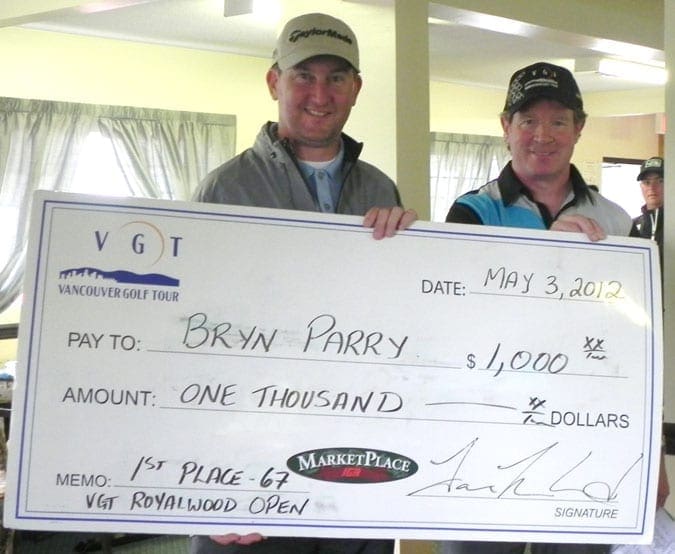 For the 2nd straight VGT event, Vancouver Golf Club Amateur Brendan Dillon took low honours in the Amateur Division, carding a very nice round of 2-under par 70.  Being paired up with two professionals on the day, Dillon showed his playing partners he could compete with some of the top Professionals in our region.  After an opening bogey on the challenging par four 1st hole, Dillon rattled off 4 birdies before making his only other bogey on the 16th hole and ultimately win the Amateur flight by 4 shots over Mission GC’s Stu Dunaway and Pitt Meadows’ GC amateur Connor O’Dell. Dillon took home a Cleveland 588 Zip Groove Wedge and a $100 Marketplace IGA gift card for his play and edged himself into 2nd spot on the Amateur Order of Merit, 433 points behind O’Dell.

A grouping of 3 Canadian Tour pros (Ryan Williams, Adam Cornelson & Darren Griff) and recent addition to the Northview GC Pro Staff, Keith Martin finished t4th with rounds of 71, each wining $468.75.  A total of 62 golfers were in the field on the day, including 45 players in the Professional or Championship Amateur field.

Although the field size was relatively smaller this week, Flight B Order of merit leader Kevin Griffin dialed in his 3rd victory in 6 starts, carding a gross score of 79, good for a 2-shot win over his next challengers Murray Reed and Ian Jarvis.  In Flight B, Peter Jones had a great day of his own, carding a gross score of 81 to claim Low Honors on the day.  But it was CLEVELAND/SRIXON Flight B leader Robert Parihar who came to play again, shooting a net 68, re-asserting himself at the top of the order of merit with over 4,700 points and now over 800 points ahead of his next competitor Alex Duran!

All KP winners were awarded some fancy new FENIX GOLF apparel for their great shots on the day.  This included Professional Brad Clapp, Championship Flight – Connor O’Dell, Flight A – Ian Jarvis and Flight B – Raj Gill.  The closest shot on the day was Brad Clapp, who earned himself a spot into the JOHNSTON MEIER INSURANCE $1MILLION SHOOT-OUT on Aug.29th at the Vancouver Open Pro-am!!!  Although there were some great shots, the $5,000 Hole-in-one that was up for grabs was not won this week!!!

Today’s event was VGT’s sixth stroke play event out of the 24 events on the 2012 VGT calendar!  The top 2 Professionals will win some fantastic prizes, including a $5,000 PGA Tour Q-School Entry for 1st and a $2,500 European Tour School Entry for 2nd Professional.  Top Amateurs in each flight will be vying for over $1,000 in prizes and Marketplace IGA gift cards in each flight!!!

Our special thanks go out to Royalwood Golf Course, its owners and Professional staff that are tremendous to our tour each and every year!!
Thanks again for being a huge support of our tour and helping us PREPARE TOMORROW’S CHAMPIONS!!