Having never seen the Ridge Golf Course before, Vancouver Club’s Brendan Dillon proved that he could win regardless of local knowledge, as he went on to shoot an impressive score 67 (-5) to win his first VGT Amateur title!

Two of Dillon’s closest challengers at the turn (at 3-under par) Hein Marcus and Chris Moore both stumbled coming in, most notably Marcus who had it to -4 thru 14 before a triple-bogey on a tucked back pin on the 15th de-railed him.  “A great experience” Marcus would attest to later that afternoon.  ‘Its getting closer and closer every week, so it was fun to get it to 4-under with only a few to play’.  Moore finished the event at -2 for the day and took home 2nd place solo. 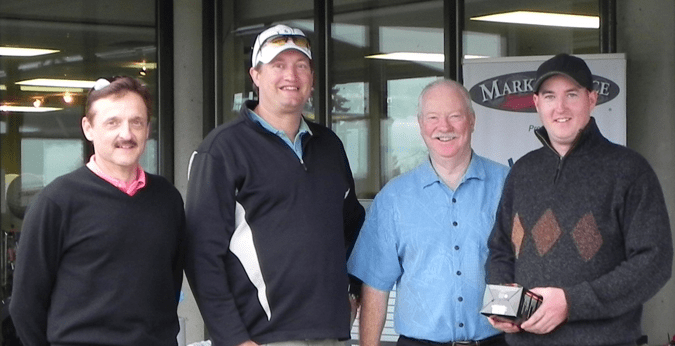 VGT was graced with both a National Champion and Provincial Champion in the field this Sunday as current Canadian Junior Champion Kevin Kwon played in his second VGT event this year, shooting a 68 earlier this year at Morgan Creek, and on Sunday, finishing in 3rd place shooting -1 on the day. Kwon was a part of Team Canada’s recent win at the 2012 Junior World Golf Team Championship Qualifier at the Royal Isabela Golf Links in Puerto Rico.  He will travel with the team to represent Canada this June at the Worlds that are being hosted in Japan.  BC Men’s Amateur Champion David Rose was playing in Kwon’s group, and he too had it going nicely at -2 for the day through 13 until he stumbled with three 3-putts to shoot 73 on the day in a tie for 8th.  Rose will represent the BC Team down in Mexico later in May for a major golf Championship and is considering making his Professional debut later this year at the Paine Edmonds Vancouver Open.

Some great scores were also posted on the day in Flight A, as your low Gross score of the day came from Burnaby’s Kevin Griffin, shooting 75 to win by 4 shots!  Griffin has been making huge strides in his game the last year and-a-half, moving from Flight B in 2010 into what will be another giant leap into the Championship Flight with his steady play of late!  Low net in Flight A went to Dale Holtz of Ledgeview with a score of 69.

Flight B was won by VGT new comer Tait Hilyer who shot an amazing score of 76 to win this flight by 4 shots!  Jason Boyd was runner-up in the gross comp but ended up winning Low Net honours with a 65! All Flight Winners were treated to Bushnell Rangefinders for their great play, and runner-up or Low net winners took home some sweet CLEVELAND MASHIE HYBRIDS CLUBS and either some MARKETPLACE IGA or VGT gift cards!

Today’s event was VGT‘s not only its largest Amateur 18 hole event in it’s 6 year history with 104 golfers, but most likely the strongest Amateur only field, with 46 Amateurs competing under a 5.0 RCGA factor!

Our special thanks go out to our title sponsor of this event, MTC Lawyers (Ted Murchison, Sandy Thomson and David Patterson) who have been a 3-year sponsor of the VGT, and have helped us give all our golfers on the VGT the opportunity to play great golf courses like Northview in tournament conditions!  Thanks so much for helping us make this happen!