After a full season of golf on the China PGA Tour in 2011, Burnaby Professional John Shin made his mark this Thursday on the Vancouver Golf Tour by winning at Kings Links for his 2nd time out of 4 he’s played this year.  On his home track (one he’s very familiar with – 4th victory in 5 years at Kings Links), Shin battled strong winds and bone-chilling temperatures to shoot 69 (-3) and edge out his nearest competitors Nick Taylor and Matt Makinson who fired 2-under par 70’s on the day.  Shin vaulted up to the top of the money list with his $1,400 cheque to bring his total up to $3,387.00 for the year as well as top of the CLEVELAND/SRIXON Order of Merit with 3,550 points.  The win places Shin a full 1,000 points ahead of his nearest chasers, including 4-time Order of Merit winner Bryn Parry (2,550) of the Players’ Academy in N. Vancouver and Canadian Tour Pros Ryan Williams (2,541) and Kevin Stinson (2,525), who both represent the West Coast Golf Group. 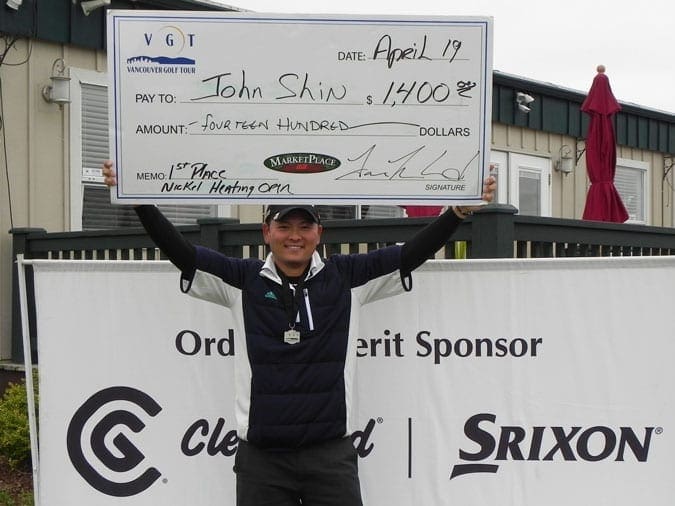 It was great to see Nick Taylor in town, after he’d been down in Phoenix competing on the All American Tour as well as the Gateway Tour gearing up for his 2012 season.  He has had a pretty decent winter down in the Desert, finishing runner-up twice on the All American Tour and winning their Tour Championship and a $15,000 cheque plus a spot to play in the Nationwide Tour event in Georgia in a couple of weeks time!

Thanks to the Title Sponsor Nickel Heating, and a couple of supporting sponsors this week’s Total Purse was valued over $11,000 in Cash and Amateur Prizes!!

Amateurs were treated to a fantastic prize table that included an Apple IPAD for Overall Winner in the Amateur competition.  This went to Pitt Meadows Amateur Connor O’Dell, who fired a very solid round of 73 considering the blustery conditions at the Links!  This was O’Dell’s first Amateur win on the VGT, and he was thrilled to see his prize when it was presented to him! Surrey’s Joey Lemieux and Chilliwack’s Chris Kobler tied for 2nd place in the Championship Flight after carding scores of 75.  Kobler came 2nd via RCGA retrogression, picking up a sweet Bushnell Rangefinder while Lemieux won a Cleveland 588 Wedge + $50 VGT credit.  The top 10 Amateurs out of 31 in the Championship flight earned prizes, including tournament host himself, Steve Savage who fired 76 and a tie for 5th place!

Thanks to Ray Porter of RBSM Consulting, one lucky winner walked away with an amazing DRAW PRIZE – a $1,000 ACER ASPIRE Notebook!  The lucky winner on the day was SATISH RAM!!!  Congrats to Satish, and thanks a bunch to Ray and RBMS Consulting for this unbelievable donation!

We always need to thank our host courses that go the extra mile leading up to our events, prepping the golf course with extra care.  And every year, Kings Links gets better and better and we can’t thank the owners Brad and Maria, as well as all the staff who make us very welcome each and every year.  Mike Keiner – you’ve done a stellar job on putting this beauty in fantastic shape every year we play!! Job well done once again LADDIE!!

Final thanks to our Title Sponsor Steve Savage of Nickel Heating & Ventilation for their continued support and sponsorship of the Vancouver Golf Tour.  Your support is instrumental and keeps giving our players a vital platform to test their skills and win some amazing cash prizes on their way to the PGA Tour!!