Twenty-eight year old Santa Cruz born Isaac Weintraub rattled off an impressive eight birdies on his way to a round of 65 and good for a 1-shot win over VGT Order of Merit Leader Bryn Parry (of the Players’ Academy in North Van.) and relative newcomer Christof Appel of South Africa.  With his first win of the ’11 VGT season, Weintraub earned himself a $2,000 pay-day, doubling his earnings for the year to $4,500.  His win also earned him 1,500 points on the CLEVELAND/SRIXON Order of Merit, pushing him into 3rd place overall for the year.

Weintraub’s win makes it the 4th win on the VGT by a CLEVELAND/SRIXON staff player.  At the end of the 11th event on the VGT schedule, five of the top 10 positions on the VGT Order of Merit are held by CLEVELAND/SRIXON players, which is a testament to their company’s great golf equipment and support of golf by signing on some of the young, talented players in our region!  Thanks CLEVELAND/SRIXON!!! 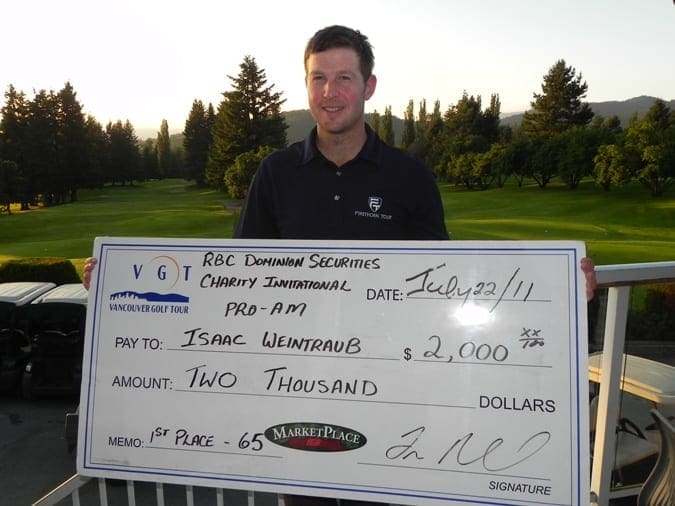 On the Charity Pro-am side of the event, Team Ray Johnson (Pro), Don & Doug Mahew, Dave Archibald & Dennis Anderson won by a healthy margin of 4 shots, shooting an incredible score of -20 on the scramble event that included 3 eagles on par 4’s!!!  Now that’s amazing!

The big theme of the day was CHARITY!  And I can’t say enough about how much support was on hand from the RBC Dominion Securities Team.  Everyone involved with the day truly helped make the day a huge success.  Last year’s event raised a total of $50,000 for the new Abbotsford Canuck Place and I have no doubt this total will be matched or exceeded once all the numbers are released!  Congratulations Laura O’Connell – You’ve pulled off another tremendous event for a very worthy charity!  You should feel very proud of all your efforts as well as pulling in a number of the volunteers and sponsors who were involved with the event this year!

Final thanks to Ledgeview Golf & Country Club’s GM Chris Hood and his team of experts for making the day available in their calendar for this great event and preparing the golf course in wonderful shape yet again.  This is the 4th event VGT has hosted at Ledgeview this year and it is no wonder why the golf course keeps churning out top players year after year!

The Vancouver Golf Tour is very proud to have been associated with the RBC Dominion Securities Charity Golf Classic this year.  We hope that all of the Amateurs were treated to some helpful tips from their Golf Professionals and got to watch the future of some of our top local Professional golfers as they attempt to make their way to the PGA Tour!  I have no doubt that some of the names you saw on the Live Leader board screens at this event will be up on the PGA Tour leader boards in the near future!!  (See the History on Adam Hadwin story)

We look forward to being a part of another great Charity event in 2012!!