Touted as one of the toughest 6,100 yard golf courses in the country, Ledgeview Golf Club once again dug its teeth into all but one competitor at this year’s LEDGEVIEW OPEN. Fittingly it was the most experienced golfer of them all (Bryn Parry) who managed to persevere in tough conditions, firing a pair of 68’s over 36 holes.  Parry’s superior play was good for a 5 shot margin of victory over Redwood Pro Doug Morgan, Chilliwack Golf Club Pro Jared Rempel and Rookie VGT Pro Brett Webster. The tournament wasn’t quite as much of a run-away as it seemed, however, as Parry and Morgan were all square at -3 after 13 holes, before Morgan bogeyed 4 of his last 5 holes and Parry birdied #17 to go -4 for the event.

Thanks to JOHNSTON MEIER INSURANCE and a host of Major and supporting sponsors, this year’s event had a record Pro turnout and Professional Purse of $11,500, the highest it has been in years!  Parry carted home a nice fat winner’s cheque of $2,300 and 2,500 points on the CLEVELAND/SRIXON Order of Merit, catapulting him even further in front of his next challenger Dave Zibrik for the $5,000 paid entry to PGA Tour Qualifying School.  Professionals Morgan, Rempel and Webster each earned $1,266.67 for their runner up finishes. 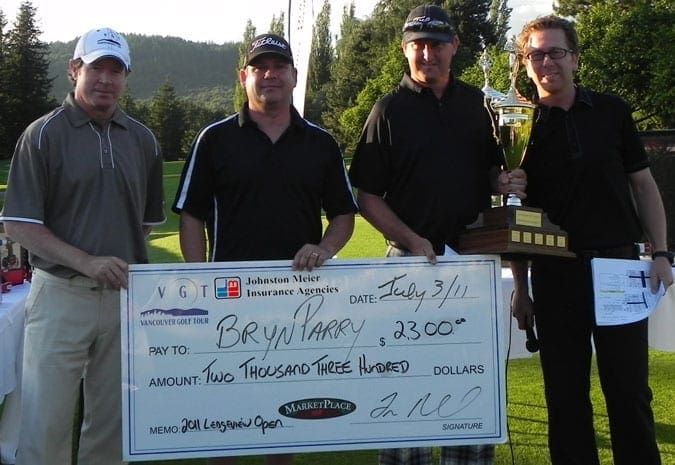 Ledgeview Golf Club has been on the radar in BC the past 30 years, developing many fine Amateur and Professional golfers from its mix (James Lepp, Nick Taylor, Adam Hadwin to name a few).  One of those in attendance at this year’s Open included former PGA Tour and Champions Tour player Ray Stewart who was part of the PGA Tour’s 1994 Dunhill Cup winning team at St. Andrews.  Stewart had a fairly decent first round at the event, shooting 72, but fell back in the pack after a disappointing 78 on day two.  Stewart was a recent winner at the Canadian PGA Senior’s Championship in 2009 and has been rehabilitating a frozen shoulder the past year to get back in form for another trip to the Champions Tour qualifying school this fall.

Stewart has been a gentleman of a Professional his whole career and he has given back to the golf community on many occasions, especially the past few years helping raise significant funds for the Fraser Valley University Golf Program.  Strange thing now they are one of the most respected University Golf Programs in the nation.  I’m sure he can feel a big sense of pride when he sees so many good young players who have come out of this program tee-ing it up in this event including Brett Webster, Jesse Singh and his son Brett tee-ing-it up in his Professional debut. Congrats to Ledgeview for supporting golf both Amateur and Professional over this period.

Congratulations to VGT Amateur Ethan Min on his perfect 5-iron shot on the 14th hole that went in the jar for an ACE!!!  Ethan’s shot was heard around the course by fellow golfers as everyone cheered the fact that he would be taking home $5,000 CASH courtesy of JOHNSTON MEIER INSURANCE. 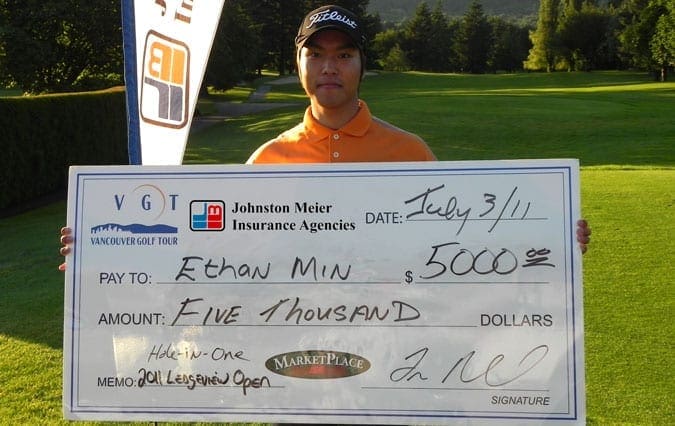 VGT would like to thank Johnston Meier’s Dave Ebner for his continued support of the Vancouver Golf Tour and in particular this event.  Attending the prize presentations, Mr. Ebner was brought to the mic to give away the winners’ cheques to the pros and say a few words.  “This past weekend is exactly what I envisioned for Johnston Meier Insurance when Fraser & I first met to discuss sponsorship opportunities some 5 years ago” stated Ebner.   “Fraser, keep working hard, your vision and dream of “Preparing Tomorrow’s Champions” is a reality. You and the VGT crew should be very proud of the opportunities you are providing professional & amateur golfer alike.”

Thanks to Johnston Meier Insurance, VGT is truly able to provide these opportunities to professional and Amateur golfers in the Lower Mainland.  Thanks again Dave for your continued support of golf!!

VGT would like to thank Ledgeview Golf Club’s Manager Chris Hood and his team at Ledgeview for co-ordinating an exceptional event on the VGT this year!  The golf course was in superb condition once again and the volunteers and committee should all be commended on a fantastic job well done this year!

“We are proud to call the Ledgeview Open one of our Majors on the VGT schedule”, stated VGT Commissioner Fraser Mulholland.  “We look forward to continuing the relationship we have with the Ledgeview Golf & Country Club at this event and the other events VGT co-ordinates at your club throughout the year”.

Special thanks to the VGT team (Mike West, Brian Small, Bill Schabes) who were at Live Scoring Central making sure our electronic leader board displays were up to date and mistake free!!  JOB WELL DONE as always gentlemen!