Paying tribute to Rory McIlroy’s record performance at the U.S. Open, and a putting lesson from his fiancé Ashley Hogg the day before, Westwood Plateau Professional Dave Zibrik scorched a course record 64 at Squamish to claim his first VGT win in 2011 and a $1,400 cheque.  “It didn’t hurt watching Rory play with such focus over the weekend” stated Zibrik.  “It definitely inspired me to play with lots of confidence today, which I did.  But I have to also pay thanks to my fiancé Ashley (Hogg) who gave me a putting lesson yesterday and for helping me on the greens today.  Her (local) knowledge of the greens certainly helped me make my share of putts today”. 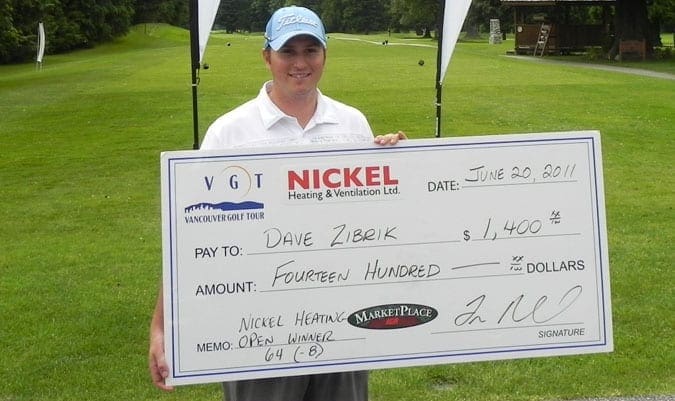 Zibrik went on quite a tear early in the round with 4 birdies and an eagle through holes 3 to 8 for an opening nine of 31.  He complemented his front nine with 3 more birdies on 15, 17 and 18 for the new course record of 64, one shot better than the existing course record that was set by fellow VGT Professional Matt Daniel last year at the same VGT event. (BTW: These guys are good!!!)

Despite not having his best start to 2011, Hazelmere Teaching Professional Phil Jonas showed he’s back on summer form, carding a score of 66 (-6), good for solo second and a runner-up cheque for $1,050.  VGT’s 3-time Order of Merit Winner Bryn Parry continued his solid play on the day with a score of 68, tying for a 3rd place finish with Canadian Tour Professionals Ryan Williams and Matt Daniel and Northview Academy’s Kyle German.  Each player took home cheques for just over $675.00.

NICKEL HEATING & VENTILATION owner Steve Savage was on site to give the winners’ trophy and cheque to Zibrik and expressed his enthusiasm for being involved in development of golf in BC.  “It’s great to see the amount of amazing talent in our local area and we (Nickel Heating) are very happy to be a part of growing the game of golf right here in our back yard.  Seeing Dave do what he did today and what Adam Hadwin did in the U.S. Open this weekend makes us feel proud of being a part of the VGT and the development process of local golfers.  We hope Adam’s performance at this year’s U.S. Open motivates more of the VGT players to build confidence and take their game to the next level on their way to the PGA Tour”.

In the Amateur field, West Vancouver’s Bryan Lichimo took home a Cleveland Launcher Driver for his winning score of 72 in a field of 57 Amateur golfers.  Lichimo won the Amateur event by 2 shots over fellow West Vancouver golfer Stefano Sidonio who shot 74 on the day.

In Flight A, Raj Singh held off all challengers with a gross score of 80 and went home with a Cleveland Launcher 3-Wood while Hector Aguilar won a Cleveland CG15 Zip Groove wedge for Low Net score of 70.

Another milestone was set on the day in Flight B as Nancy McMillan became the first female golfer to win Gross score in  Flight B with a score of 84….off the white tees!!!  Nancy won a Cleveland Mashie Hybrid club and a dozen Srixon Z-Star balls. WELL DONE NANCY!!!!  Keith Evans was the Low Net winner in Flight B winning a Cleveland Putter and VGT hat for his net score of 71.

Keeping the Squamish Course Record in the Family

When Matt Daniel shot a 65 at Squamish in 2010, he took away the current course record held by past Squamish member and future brother-in-law Kevin Hogg (who also happens to be Zibrik’s 2010 BC Match Play Championship partner).  With his 64 yesterday, Zibrik proudly brings the course record back to the Zibrik/Hogg family!!!  Who’ll be next in line to take the record?  Maybe we’ll see it come out of the 2012 NICKEL HEATING OPEN??