For his second win in a row and third time this year, 20 year old Mayfair Lakes Golf Club Amateur David Cao was crowned the winner in the Championship Flight with an impressive score of 67 (-4), three shots clear from 22 year old Capilano Golf & Country Club member David Rose.  Cao’s only blemish on his otherwise perfect scorecard came on the 16th hole with a bogey. 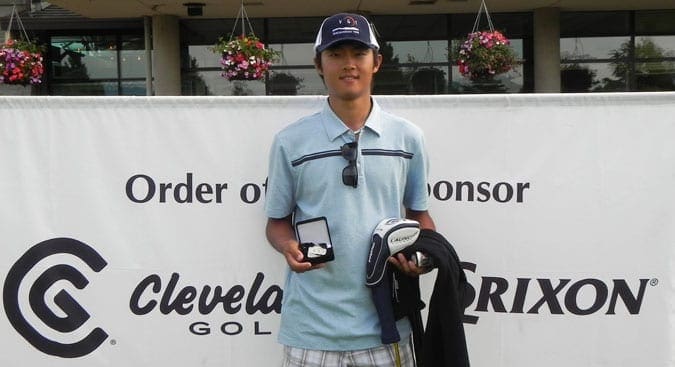 Although his eventual margin of victory was 3 shots, this event was won by Cao on the 17th hole as he and Rose strode down the 17th fairway tied at -2 for the day.  Cao would eventually put away with birdies on #17 and #18 while Rose, in tournament form for the first time in a while, was not so fortunate, making a double-bogey on #17 before birdying the final hole.

With his victory, Cao won a CLEVELAND LAUNCHER DRIVER and shot himself even further ahead of his next challengers on the CLEVELAND/SRIXON Order of Merit, Q Club’s Matt Lister and Morgan Creek’s Jesse Singh.  Cao sits with 7,500 points while Lister holds down 2nd place with 4,500 points and Singh in 3rd with 4,446 points.

Cao has been the dominant force on the VGT Amateur circuit this year placing nothing worse than 7th place in the 8 events he has played.  He’ll look to make it three wins in a row at VGT’s next event at Squamish Valley – The NICKEL HEATING OPEN on June 20th.  Cao’s plans are to head over to China later in the summer to tee-it-up in a few China PGA Tour events, where he’ll hope to start his Professional career either later this fall or early next year!

In other flights, it was Langara Men’s Club member Kevin Griffin’s first Low Gross win in Flight A, carding a respectable score of 78 for a 4-shot win over Flight A Order of Merit Leader Murray Reed.  Griffin earned himself some great swag for his win – a CLEVELAND MASHIE HYBRID and a $100 MARKETPLACE IGA gift card and Reed took home a $50 Mayfair Lakes gift card and a dozen Srixon Z-Star balls.  The Overall Flight A Net Winner was tied between Raj Singh, Tyler Smith and David Turner with a score of 74.  Singh took home top prizing, winning a CLEVELAND CG15 WEDGE and a $50 Marketplace IGA gift card due to RCGA Retrogression!

Low Gross in Flight B went to Hector Aguilar, who topped a smaller sized field of 9 golfers and took home a $50 Mayfair Lakes gift card and a VGT towel.  Low Net honors went to Robert Parihar and Peter Fung who carded Net 69’s.  Parihar took home top net prize of a $50 Marketplace IGA gift card and a VGT Towel based on RCGA Retrogression.

Low Gross in Flight B went to Hector Aguilar

VGT’s players were given the chance to win $5,000 on the 15th hole, courtesy of a Hole-in-one prize offered up by JOHNSTON MEIER INSURANCE.  Unfortunately there was no winner.

Vincent Low also qualified for the $1MILLION JOHNTSON MEIER HOLE-IN-ONE SHOOT-OUT at the Vancouver Open for being the Overall Closest to the Pin on the day!

Congratulations to all Amateur CLEVELAND/SRIXON SPRING ORDER OF MERIT LEADERS: