‘A GOLDEN EAGLE FINISH FOR GORBAHN’

It was another terrific weekend for Championship golf on the IGA Vancouver Golf Tour.  This weeks stop was at the Boyd Autobody & Glass Golden Eagle Open at the Golden Eagle Golf Club (North Course), VGTs 16th event on the 2020 schedule.

A special thanks goes out to Golden Eagle Golf Club and to Rishi Bakshi of Boyd Autobody & Glass for stepping up their support and helping us launch this inaugural event on the VGT. 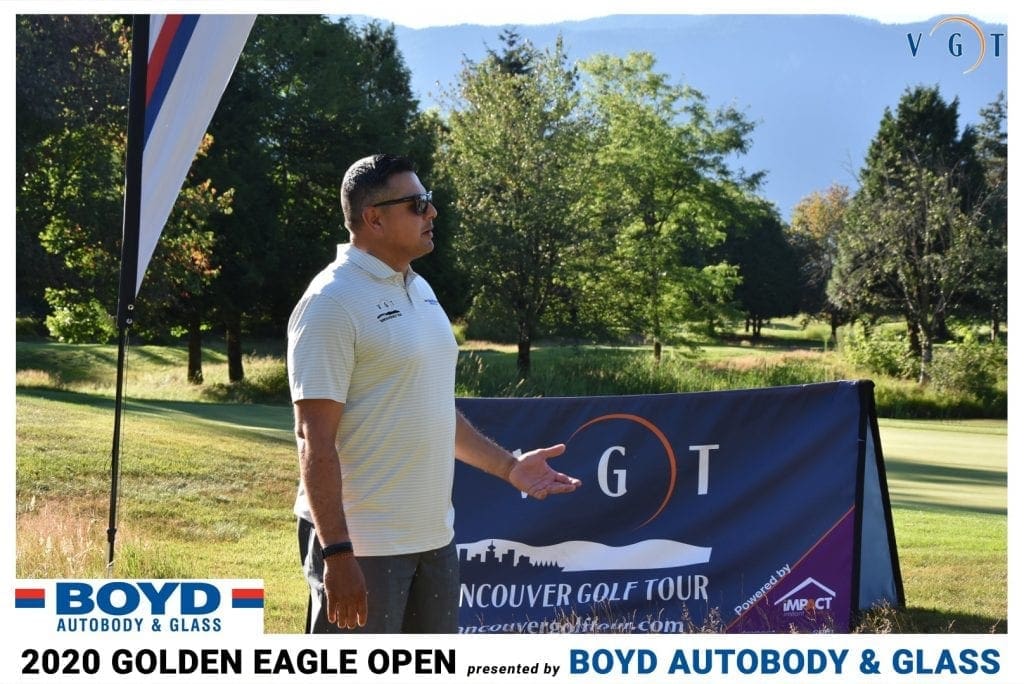 In our Professional Division on day one, Zach Olson from Chilliwack GC, Phil Jonas from Hazelmere Golf & CC and John Mlikotic from Kelowna BC Led the tournament off as our inaugural group off the tee.  Olson fired a bogey-free -4 (68) leading the morning wave, tied with Mlikotic while Jonas rounded the group out at +3 (75).

However, the afternoon wave saw some great scoring and it was the long hitting Kaleb Gorbahn from Smithers BC who took the lead on day 1 with a stellar round of -5 (67)! This score set the course record at Golden Eagle North Course for tournament play! A late bogey on 18 spoiled a bogey-free round, but a fantastic one nonetheless!

Karishma Thiagaraj from Predator Ridge Resort tied the low-round for the Womens Open Division with Amanda Minni, both shooting a -4 (68)! She had 6 birdies and just 2 bogies on the day.

In the Amateur Division Tristan Mandur from Duncan Meadows GC stormed into a tie for the overall lead. Mandur Fired a -5 (67) tying Gorbahn for the course record! Amanda Minni from Beach Grove Golf Club fired a -4 (68) to take the lead in Women’s Champ flight while Cam Mackinnon from The Falls GC took the solo lead in Flight A at +3 (75). In Flight B leaderboard, Andy Banks from South Pacific Golfers Association was overnight leader at +8 80.

Who was going to come out on top in day 2?

On day two, Phil Jonas had himself a fine bogey-free round of -3 (69) to finish at E, T-8th in the Pro division! Our day 1 leader Kaleb Gorbahn got off to a strong start, making 3 birdies in a 5 hole stretch and another one on the 18th to get to -8 through his first 9 holes.

At this point, Tristan Mandur was running away with the Men’s Amateur championship title. Kyle Claggett from Mission GC tried his best to keep up with an impressive 70, but it wasn’t nearly enough to catch Mandur who finished with a 2-day total of -7 and 6 shot win. 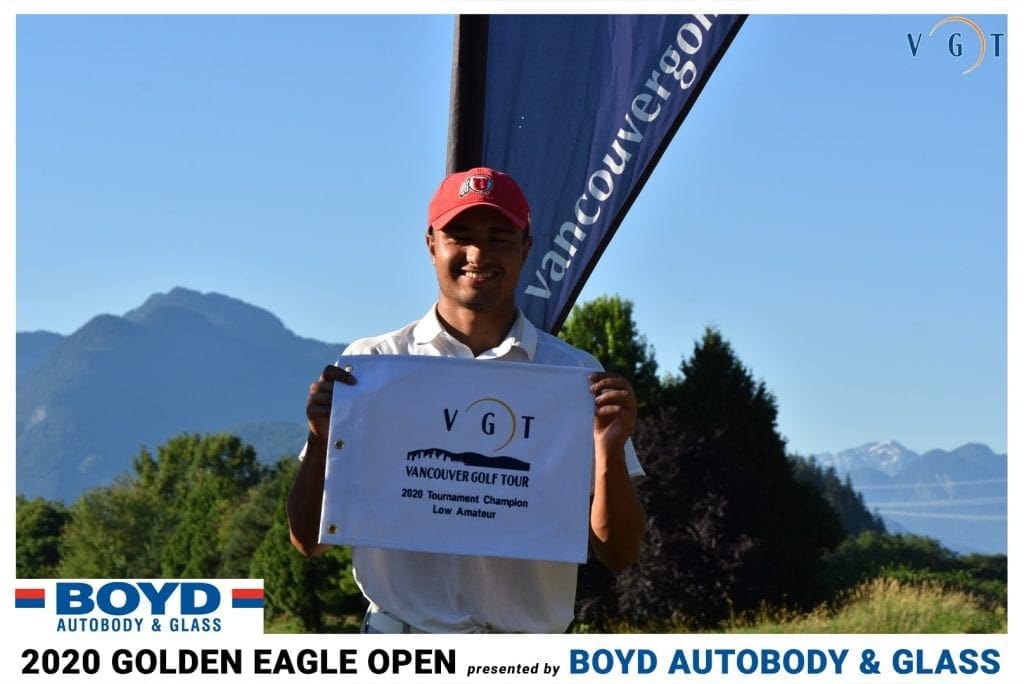 In the Womens Open Division Amanda Minni was pulling away from the field after her front nine 33 (-3) and creating a great lead. Angela Arora notched 3 birdies on the last 3 holes, putting her to -3 overall and in a solo 2nd place finish!

Back in the Professional side a bogey on hole 6 (15th hole of the day) dropped Gorbahn back to -7.  But on the very next hole, he striped a monstrous 320 yard 3-wood to get him back to -8 for the championship!

Meanwhile, Mandur tied the overall lead at -8 with a deft chip that trickled down the green and into the hole! Mandur was looking to win both Men’s Champ and Overall leaderboards!

With a huge eagle on 7, Mandur jumped to -8, but a bogey on 8 (17) made it tough to win the overall title. On the final hole, a 3 wood off the tee put Gorbahn in the right rough, and an incredible approach on the par 5 that left him a solid 15 feet below the hole on a tricky pin.  This gave Gorbahn a good look at Eagle to finish it off and win the overall event. An uphill left to right putt struck firmly tracked its way up to the hole and… EAGLE for Kaleb Gorbahn!! 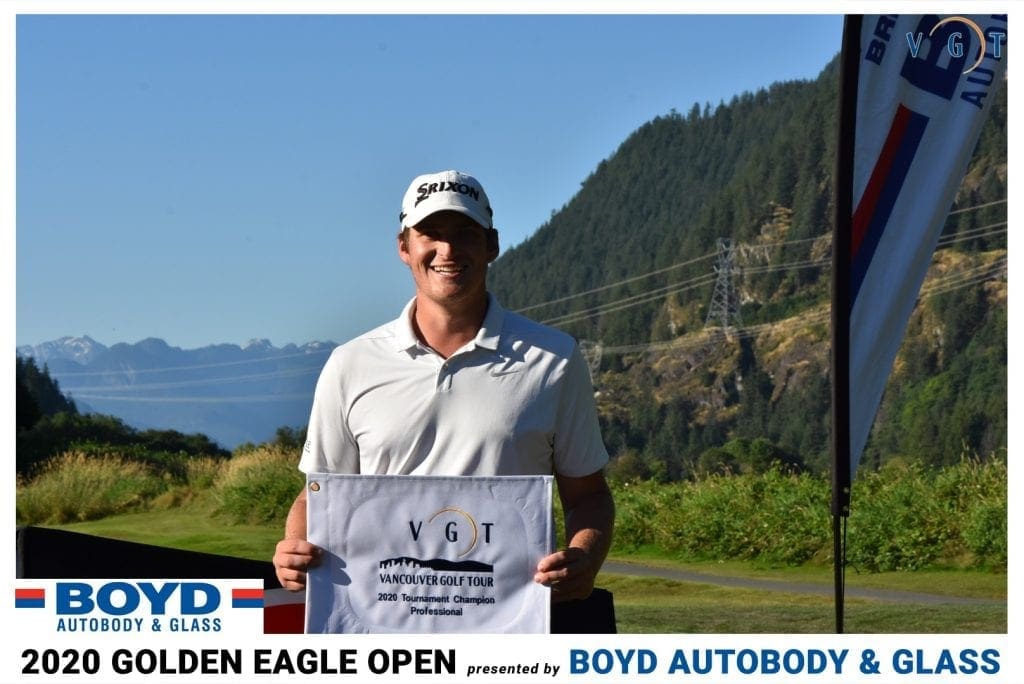 What a way to finish the tournament!!

How fitting it is for the Golden Eagle Open to have a final eagle to close out the championship. -10 for Gorbahn with back-to-back, course record, 67’s! Congratulations!!!

Tristan Mandur finished at -7 to win male championship flight by 6 shots. Amanda Minni sealed her victory holding off the late charging Angela Arora to win by 4 shots at -7. 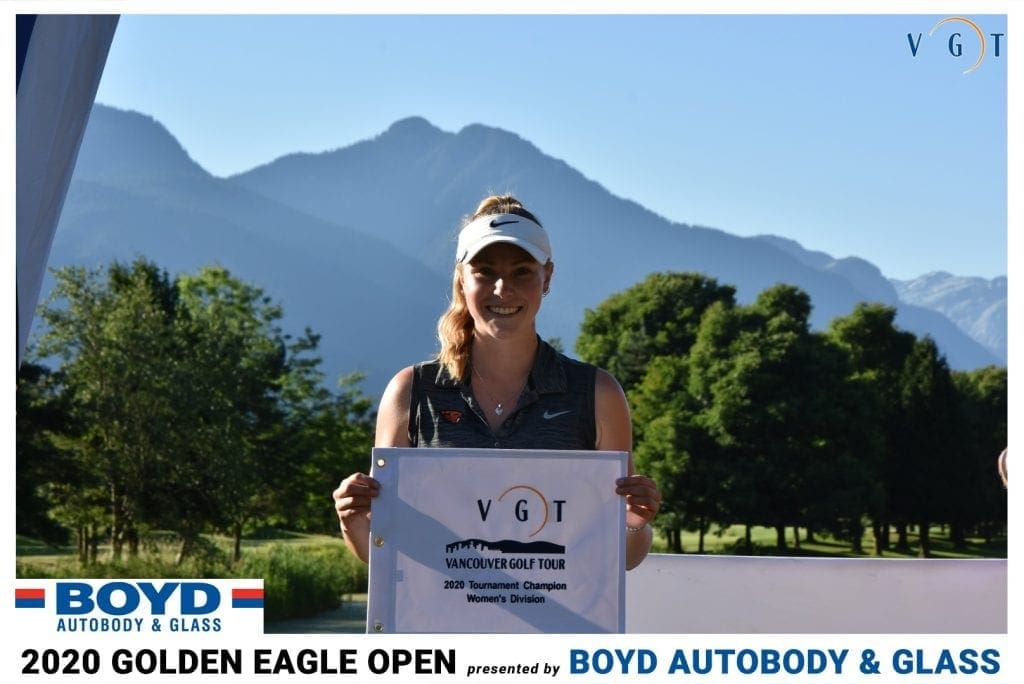 Jim Zalusky shared the victory with junior Tony Bin from Quilchena Golf & CC at +9 in Flight A but retrogression gave Zalusky the Title. Quite a dramatic finish here as Tony drained a final hole bird to tie the lead! 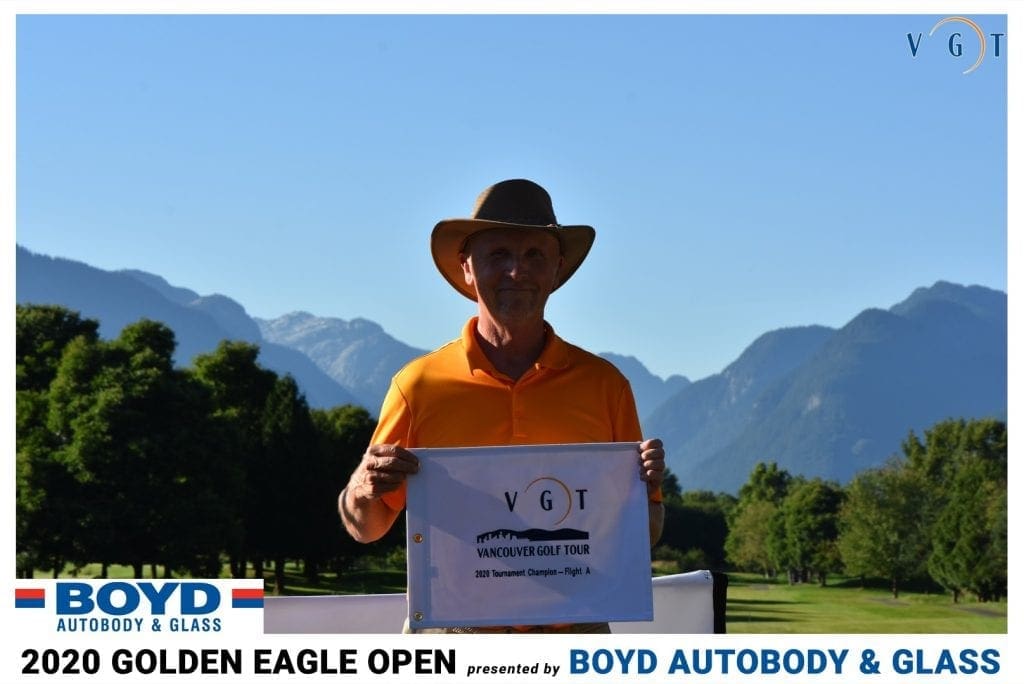 Finally, in Flight B, it was Andy Banks who held his lead from day 1 to win by 4 shots at +21. Finishing T-2 was fan-favourite Gery Valiner from South Pacific Golfers Association. A very solid 81 (+9) to jump up on the leaderboard. Trevor de Keruzec and Steve Baskerville were also tied for second in the B flight. Well done everyone!!

As always, we would to thank our Title Sponsor of our events.  So to Boyd Autobody & Glass, and in particular Rishi Bakshi for his faith in the VGT and the value it is providing many talented golfers during the Covid-19 pandemic. Thank-you!

A further shout-out must go out to Head Superintendent Mike Ryan and his whole maintenance crew for conditioning the course spectacularly for all 140 players.  The feedback was nothing but positive all weekend long!  And to the entire Golden Eagle team for being such great hosts to the VGT team for making this years event another top notch championship for the players.

And finally our VGT team members for assisting with announcing, timing and rules. You all made this event possible.