On this day, not only did the Pro’s score well, the junior future stars of the game shined the brightest and showed glimpses of brilliance throughout the tournament. 2020 Mid Valley Investments PRO-JUNIOR Championship at Cheam Mountain Golf Course was another amazing tournament with fantastic storylines in both our Pro and Junior leaderboards! The future is very bright for Canadian golf!

In the Men’s Pro division, we had a tie for 1st place at (-4) 52 between Seymour Creek Golf Center’s very own Bryn Parry and Michael Belle from Vancouver GC who had a strong finish at the Chilliwack Championship a week ago! We also had a three-way tie for third including Kevin Stinson, Chad McAdie (both playing in their home courses) and Gordon Jarvis from McCleery Golf Course at -3.

But it was 12-year-old Maxim McKenzie from Chilliwack GC who headlined the tournament.  Not only did he capture the Junior Boys (9-12) division with an incredible round of (-4) 52, but he did the unimaginable and shared low score for all Professionals, and topped the day off with a hole-in-one on the 13th hole to bag a whopping $2500 cheque to his name! Bravo Zulu Max! This kid is a special talent! 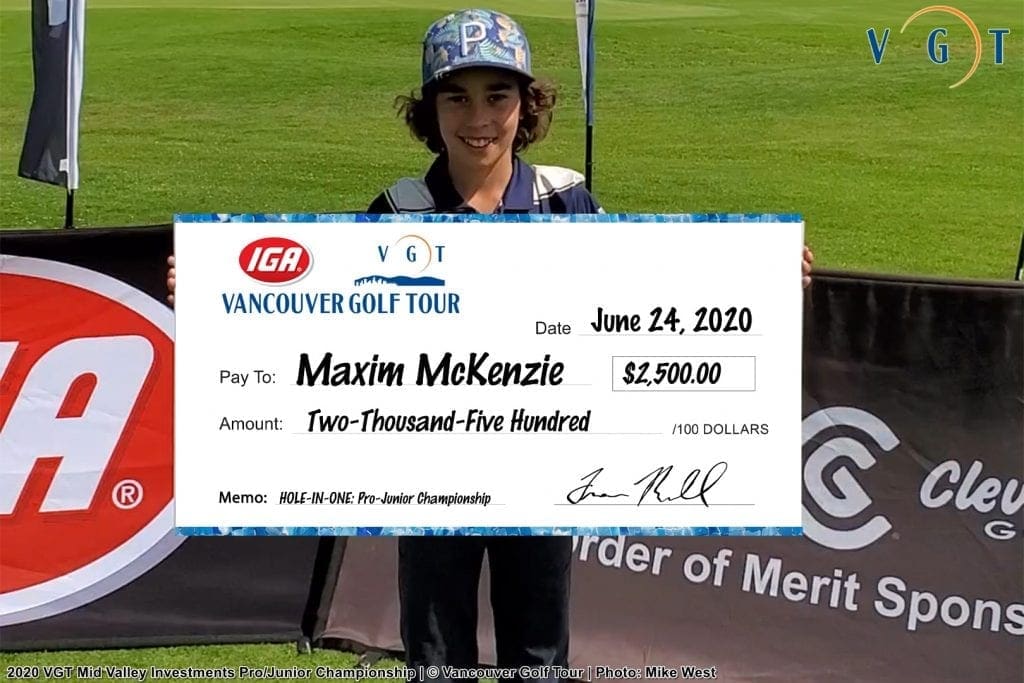 Jaden August from Meadow Gardens GC finished second with a solid (+2) 58. Well done boys. Post-round, Max had the chance to get an interview done with our commissioner Fraser Mulholland and the kid nailed the interview with professionalism and poise, stating that he wanted to play in many more tournaments this year.

In our Pro-Junior Team leaderboard, the group of Lavers/Gandhi/Underwood/Jaakkola (Team BC Juniors) finished on top at (-12)! McKenzie’s group finished in a three-way tie for second (Mckenzie/McKenzie/Miller/Zhou) at (-9) along with Belle/Reddicopp/Liu/Davies and the Jarvis/Bai/Prasad/Chen group. 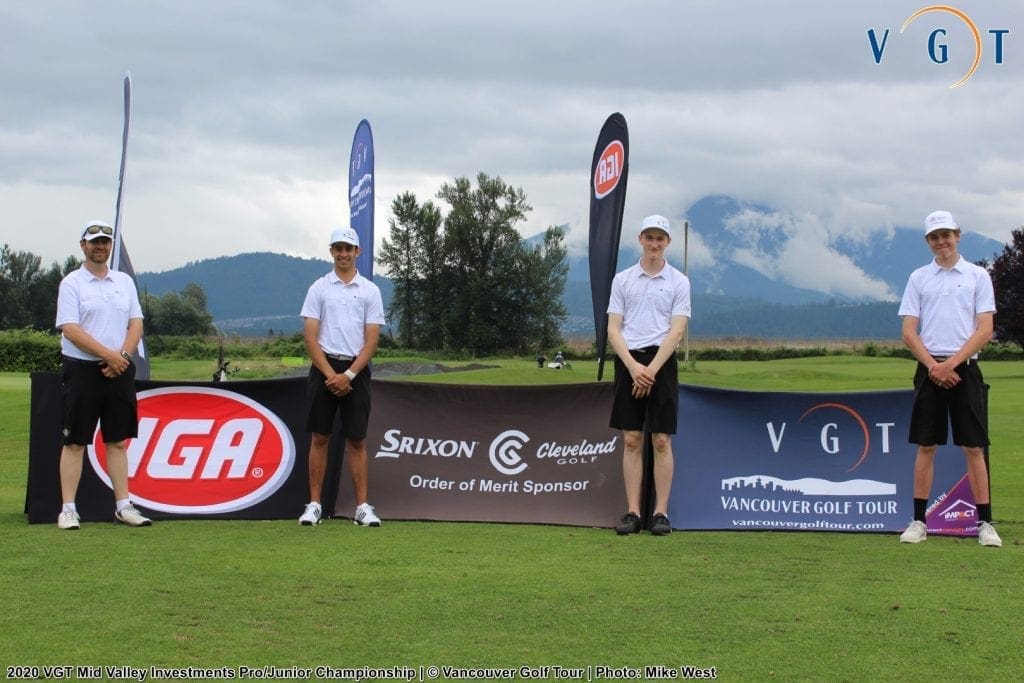 In the Junior Boys (13-14) group, Joshua Ince from Morgan Creek shot another great round of (-2) 54 to win by 7 strokes over Owen Crockett who resides in Ledgeview GC.

There was another tie for first in the Junior Boys (15-16) division between Manu Gandhi and Niklas Jaakkola (-2) 54, (who had a solid T-8 finish at the Sonic Transport Open) both from Seymour Golf & CC.

Now capping off the Junior Boys, Dylan Prasad from Morgan Creek GC shot an impressive (-1) 55 to edge runner-up Song Bai from Marine Drive GC by one shot in the Junior Men’s (17-18) flight.

Grace Aoting Yao from BC Golf Vancouver Region came out on top in the Junior Girls (9-12) with a stellar 57 (+1) score. It was an impressive feat because she won by a large margin over her competitors. Reese Johnston who played in her home course, finished in second place.

In the Junior Girls (13-15) flight, Bonnie Zhai from Morgan Creek GC finished with a (-1) 55 to win by 4 shots over Elise Liu from Quilchena Golf & CC (+3) 59. Congratulations to all the winners!! Amazing scores everywhere~

This event was a very special event for all players involved, but in particular for a few Pros getting to play with their sons or daughters in a Pro-Junior competition for the first time.  There was a general excitement in the air as soon as the juniors entered the grounds and this continued throughout the day as their names were announced on the 1st tee for a number of young and talented junior golfers who continued to experience an day they won’t forget mentoring from one of VGT’s top Professionals on the day.

Our special thanks go out to Dean and Stephanie Reddicopp of Mid Valley Investments for their special contributions to this event, which started with a generous donation to the Pro-Am event allowing the Pros to earn some nice cheques and for the Juniors to receive some great gifts up front (some Srixon balls & a Travis Mathew Hat for all), as well as some fun prizes for their exceptional play! 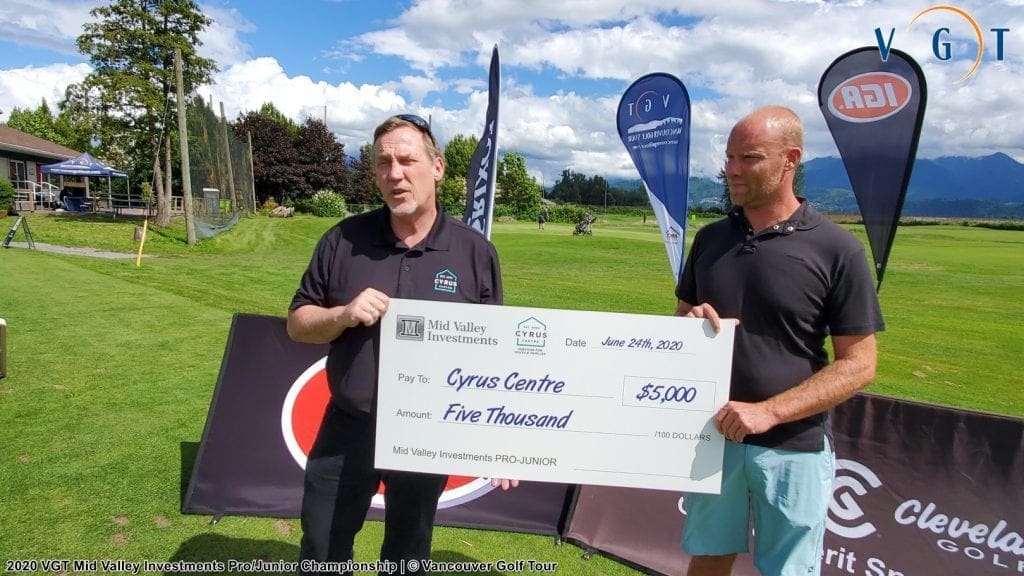 A donation of $5,000 was made by Mid Valley Investments to the CYRUS CENTRE

At the core of the event was youth, not only through our young golfers gaining some valuable lessons on course with our Pros, but in the funds that were raised thanks to Mid Valley Investment’s support.  At the end of the day, a very sizeable donation of $5,000 was made by Mid Valley Investments to the CYRUS CENTRE so they can continue to operate some much needed youth programs in the Abbotsford and Chilliwack region! Thank-you Dean and Stephanie for your sincere generosity! We couldn’t have done this without your support!

As always, we would to thank the course maintenance crew (Chad McAdie & team), and Cheam Mountain Golf Course for hosting our event (Jared – first class as always).  Our continued thanks to our VGT team members for assisting with announcing, timing and rules. You all made this event possible.

Final thanks to all of our VGT partners, in particular to our 14-year Tour Title Sponsor, IGA Stores of BC and 14-year Order of Merit Sponsor Cleveland Golf / Srixon Canada for allowing us to run the VGT professionally week-in-week out for our BC players, particularly during this Covid-19 pandemic!