While it wasn’t where 26-year old SFU alumni envisioned he’d be at the start of the week, John Mlikotic made the most of his week off the Mackenzie Tour this weekend at the Chilliwack Men’s Open on the VGT schedule.  The Kelowna Pro carding rounds of 65, 69 (-10), good for a 3-shot win over 7-time Chilliwack Open winner Bryn Parry and West Van’s Kevin Spooner.

After earning conditional status on the Mackenzie Tour PGA Tour Canada this spring, Milkotic has been slowly finding his stride with his game on the VGT.  He was one of 3 players to set a course record at Sandpiper Resort back at the VGT Player’s Championship where he would finish in a tie for 3rd at (-13).  Three weeks later he would make the most of a sponsor exemption into the Golf BC Championship at Gallagher’s Canyon, making the cut for the first time on the Mackenzie Tour on the course he grew up on and where he has hung his hat as an Assistant Pro when he first turned Pro in the fall of 2016.

In an interview with VGT Commissioner Fraser Mulholland, Mlikotic described his journey into Professional Golf as a steady process.  “We often see the likes of Jordan Speith and just lately Matt Wolfe who surge onto the scene from Amateur to having huge success in Professional Golf” stated Mlikotic.  “But for the vast majority of us, the process is much longer and you need to be patient.   I am happy that I am seeing progress in my game the past 2-3 years, gaining some status on the Mackenzie Tour this spring, and now making my first cut on the tour.  Today’s win is a huge confidence boost and a re-assurance that the things I have been working on are paying off.  I am grateful that we have the VGT to come home to and use as a tool to develop our games and learn how to become better players.  I can’t wait to get back out there on the Mackenzie Tour after the re-shuffle and put it to the test”.

With his win, Mlikotic earned a $2,500 payday, which will help him cover some hotel and rental car costs in the 2nd leg of his Mackenzie Tour journey.  And it couldn’t come at a better time, as he got an email shortly after his win saying his # came up to enter the event in Halifax.  He will plan on following the remainder of 6 events on the Mackenzie Tour schedule that wraps up in middle of September.  His game is definitely in form and his 2nd Professional win here at the Chilliwack Open should provide some additional confidence to move up the leaderboards as he travels across the PGA Tour Canada schedule!

In the Amateur side of the tournament, UFV Golfer and Chilliwack Golf Club member Zach Olson took the title in fine fashion with rounds of 70,70 (-4) for a 3-shot win over Ethan Cairns.  This is Zach’s second Amateur win on the VGT this year after his Low Amateur showing at the VGT Player’s Championship back in May.  Overall Net Champion honors went to Amarjit Bajwa with a 2-day net score of 139 (-5).  Bajwa earned top honors after tying with 2 other players (Colin Holding and Steve Mcintosh) and winning in Golf Canada Retrogression. 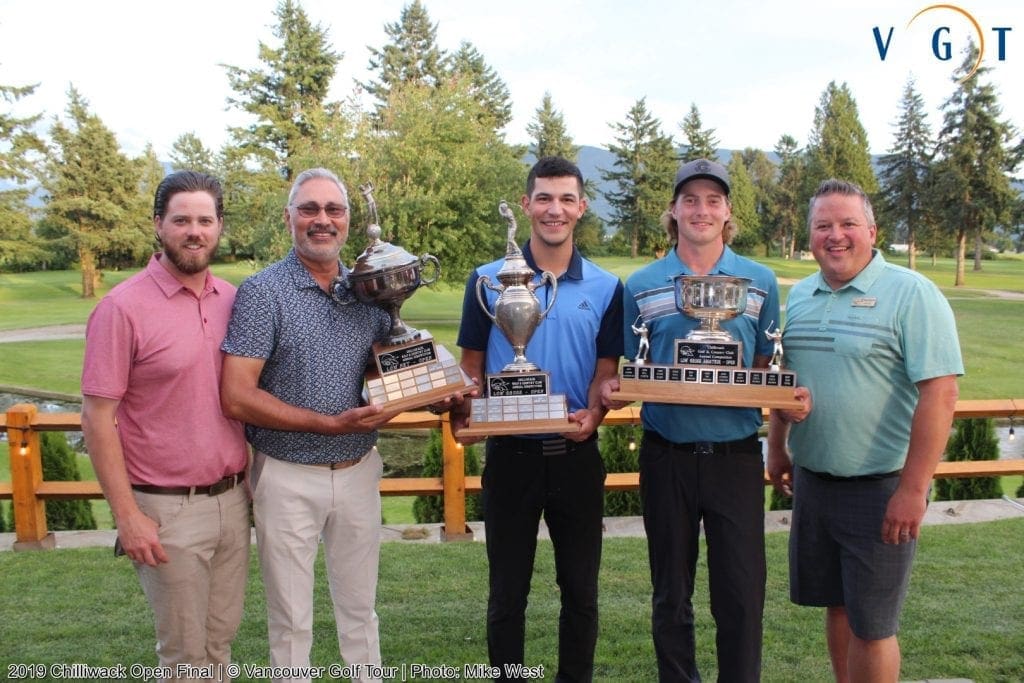 A huge hand to the Chilliwack Golf Club for putting on an incredibly successful event once again.  From the conditions of the course to the Travis Mathew experience and Party at the Pavilion, you have once again knocked it out of the park for all 200 players!  It is no wonder there is a wait list 2 months in advance of the event every year!  Congratulations!

Congratulations to all winners at this year’s Chilliwack Men’s Open!