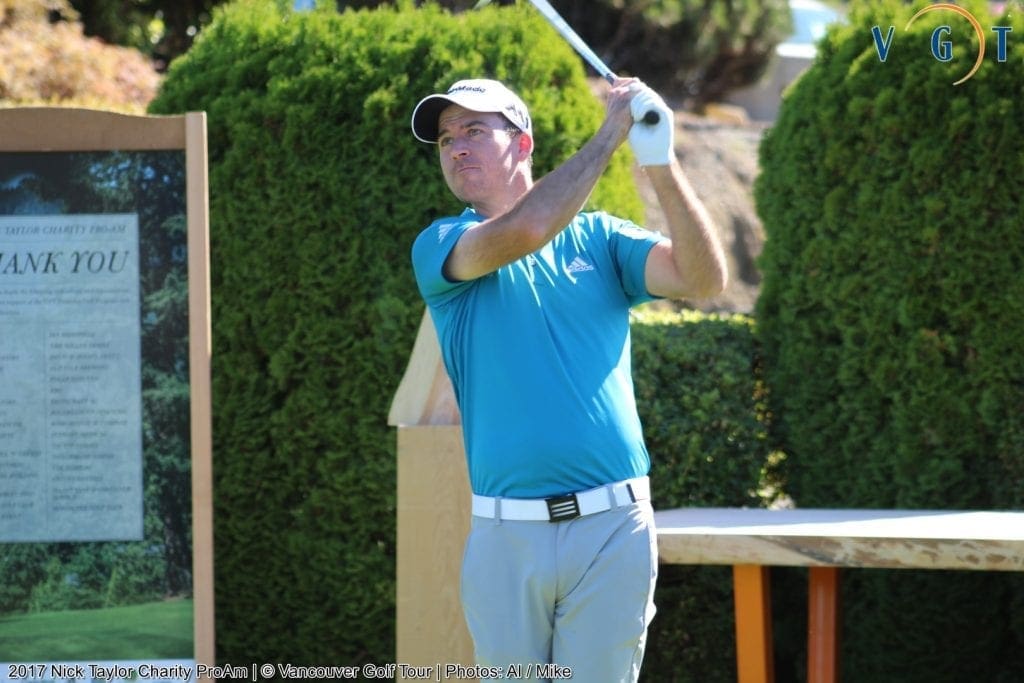 The sold-out tournament at Ledgeview Golf Club – and the preceding gala dinner on Tuesday evening – raised funds for the Cascades golf program and a pair of charities selected by Taylor and wife Andie: the Starfish Pack food program, and the Holmberg House adult hospice facility. Final fundraising totals are yet to be calculated.

Taylor, reflecting on hosting his own charity tournament, termed it “surreal.”

“Chris Bertram (Cascades golf head coach) and UFV put so much work into this,” Taylor noted. “This has been a tournament that’s been going on for eight or nine years . . . He (Bertram) approached me last fall after I’d played (in the Cascades’ annual fundraising tourney), and had an idea and we kind of ran with it. It’s turned out amazing.

“You take a lot of pride in having an event named after you . . . it’s a pretty cool couple days.”

The tournament, featuring 24 high-calibre pros from the VGT, came to an exciting conclusion. Taylor and UFV Cascades golfer Daniel Campbell were tied for the lead at three-under (67) through 18 holes, necessitating a playoff beginning on the par-four first hole. Both players reached the green in two, and both were tight to the pin – in fact, Campbell’s deft chip from the left edge of the fairway landed just three feet from the cup, inside of Taylor’s ball which was five feet away.

Taylor stepped up and drained his birdie putt, but Campbell’s ensuing effort rolled around the edge and lipped out, giving Taylor the victory.

Yesterday’s Nick Taylor Charity Pro-Am could not have ended in better style. We had a playoff at -3 between PGA Tour Champion, Nick Taylor and UFV’s Daniel Campell. After Nick hit his approach shot on the first playoff hole to about 8 feet, Daniel clutched up and hit his shot just inside Nick’s. Here how it all ended. @ufvcascades @nicktaylorgolf @vancouvergolf #playoff #proam #Abbotsford #Charity

“We’ve got some fantastic players here (at UFV), and we keep telling people that,” Bertram said with a smile. “It’s really nice when you get out here and the tournament host, a PGA Tour winner, gets in a playoff with one of our guys. It’s a really nice way to go. Daniel is a fantastic young player for us . . . and you look a little bit further down the leaderboard, and we had another one in the top five (Halen Davis). I think what it says is, our players and our program are competing at a very high level.”

Bertram said that Nick and Andie Taylor’s involvement this year has “taken the whole tournament to another level.”

“It’s just great to see the whole Fraser Valley golf community coming together and pitching in to help us do some good for some worthy causes.”

Taylor, an Abbotsford product who grew up playing at Ledgeview, recently completed his third full season on the PGA Tour. He has a PGA Tour victory under his belt (the 2014 Sanderson Farms Championship), and earned over $1.2 million with four top-10 finishes this past season.