Thirty-two year old Langley Professional James Allenby set the local golf world on fire this weekend at the 2017 Chilliwack Men’s Open.  On Saturday Allenby  set the new competitive course record at Chilliwack Golf Club with a 9-under par 63, bettering the old mark of 64 set by Ryan Williams in 2015.  He headed into Sunday’s final round with a 4 shot lead over two players  (Chilliwack GC) and Brett Stewart (Ledgeview).  The biggest question circulating on the day from everyone was “how’s he going to back up that low round”? 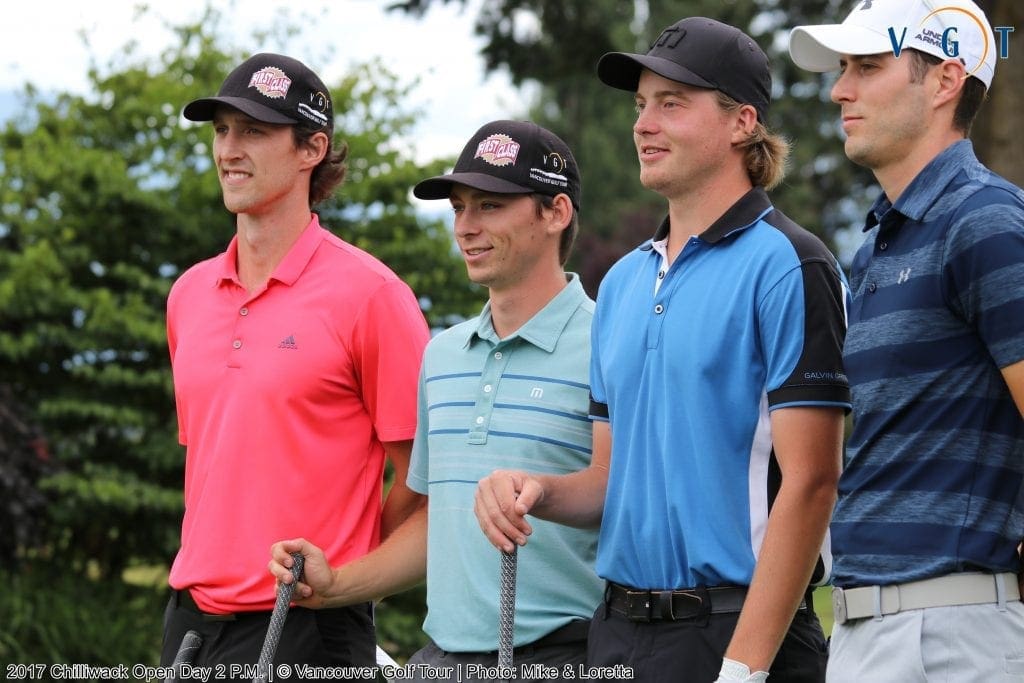 Well he did a LOT better than most gave him credit for.  Most figured he would probably pull the win off since he has been playing some really great golf this year, but most guessed something like 63, 70 = -11 total.  Which by the way would have been 3 shots good enough for the eventual win.  But when he got off to a fairly fast start birdying 1 & 3 and chipping in for eagle on #5, he thought to himself “why not just see how low I can go”?  When birdies fell at 6, 7 & 9, Allenby found himself at -7 thru 9 holes.  And the buzz from the crowd and volunteers at the scoring station was getting louder by the minute.

A small crowd started to follow along as the talks of a 59 were whispered about amongst some of the volunteers and fans.  And whispers turned into loud, vocal talks when Allenby holed a 7 footer for birdie on 10 and watched his ball hang on the lip on 11 and stumble in for eagle.  All of a sudden the Langley Pro sat at -10 through 11 holes.  13-under was what was needed for the illusive 59 and the talks of who was going to win the Chilliwack Open parted ways for the bigger discussion:  How low can Allenby go?

Allenby hit a beauty iron shot to 15 feet on the testy 12th par 3.   He tapped his putt down the hill and it slipped by the hole.  And kept running a good 4-5 feet past.  He needed that putt to drop.  And it did!  10 under thru 12 with the reachable par 5, 13th hole up next.  After a solid 3-wood down the right side of the fairway Allenby needed to carve something 5-10 yards left to right in order to maneuver the tree-line.  This meant he would need to take aim over the greenside pond and hit a near perfect shot.  And he did just that, landing his hybrid a mere 10 feet from the pin and rolling just off the green only 20 feet from the stick.

His downhill slippery putt was as good as you can do without holing it.  It sat on the front lip and just would not go in.  Tap in birdie.  11-under par thru 13 and 20-under par thru 31 holes of the tournament.  Unheard of!  Onto the 14th par 3.  Allenby hit what was a fairly predictable shot with a tucked left pin.  Short right, leaving him a fairly simple chip.  And he hit a beauty just 4 feet from the hole, tapping in for his par. 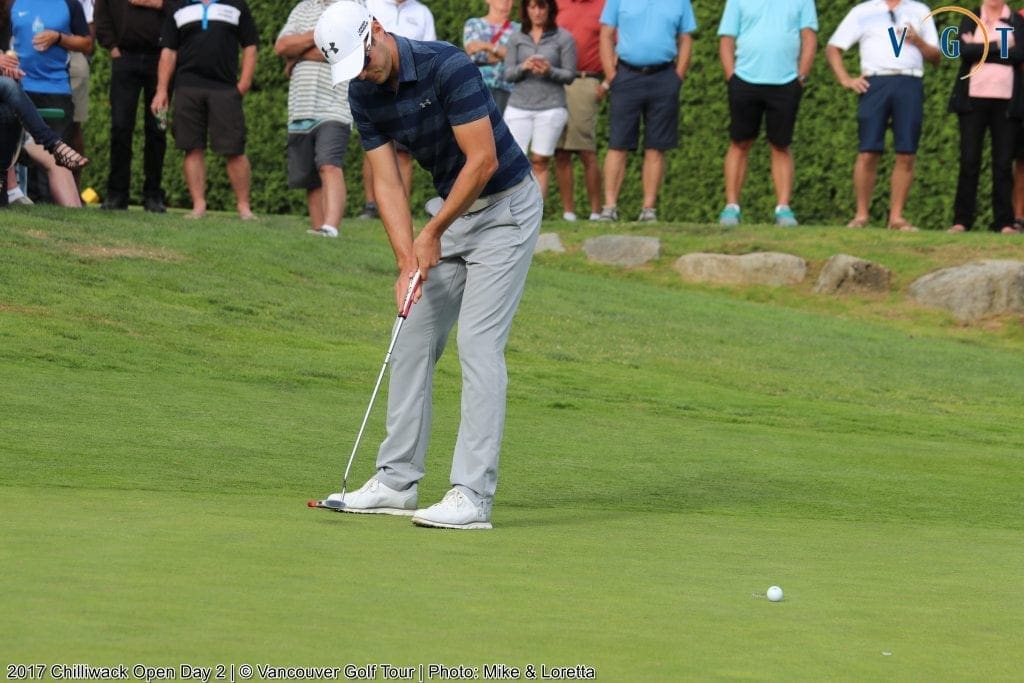 Allenby Lips Out to Miss Tough Birdie on 15

The 15th hole was now surrounded by about 100 fans and morning golfers who had heard the buzz of a possible 59 and seen some of the Live Facebook feeds that VGT Commissioner was offering up as Allenby was in his glory.  Allenby took out the lumber and took dead aim at the drive-able par 4 hole.  His ball leapt off the face of his 3-wood and came to rest some 30 feet from the stick, just off the green and leaving him slightly above the hole to this guarded pin.  Anything chipped by the hole was down the hill and off the green.  He had to be precise and careful at the same time.  And that is exactly what he did, hitting a beauty of a shot that was probably inches away from being a tap-in birdie.  Instead he was faced with a 7 foot down curler of a putt.  All eyes watching now.  He stepped up and gave his ball a tap down the hill, the ball curling towards the hole.  It hit the lip of the hole.  But did not enter the cup.  Tap in par was what he had to settle for, keeping him at -11 thru 15.

With the gallery as big as it has ever been at the Chilliwack Open, Allenby struck a perfect 3-wood off the tee leaving him with no more than 120 yards into a back flag.  Whether he was in between clubs or just feeling the enormity of the task, Allenby hit (for his standards) a mediocre wedge shot to 30 feet, leaving a testy uphill putt.  As good as his putt was, it just wouldn’t climb far enough up the hill, and he would tap in for par again. Crowd Gathers on the 16th Tee

Stuck on -11 now with holes running out, Allenby put himself back to the task of hunting down a birdie on the 17th hole, a 185 yard par 3.  With the pin tucked back right, Allenby hit a very solid 7 iron shot to 25 feet pin high on the left portion of the green.  When his ball hit the back of the cup and popped in the bottom, the crowd (and Commissioner) roared with excitement knowing just one more birdie would mean a magical 59!

The 18th hole at Chilliwack Golf Club is clearly one of the best and toughest holes on the golf course.  A perfectly threaded tee-shot is required in order for a clear iron shot to the green.  Allenby didn’t want to lay back too far even though this widens the fairway and offers a higher percentage to hit the green in 2. But at this point, Allenby wasn’t thinking par.  He needed a birdie.  So he struck his trusty 3-wood like he had so many times this weekend.  It hit left side of the fairway, but took a huge hop and continued thru the fairway and under one of the many popplars lining the fairway.  Not impossible to get his shot under the tree and to the green, but it would take a perfect strike.  In Allenby’s words, he caught his punch shot a ‘hair thin’, resulting in the shot coming up 10-15 yards short of the green. 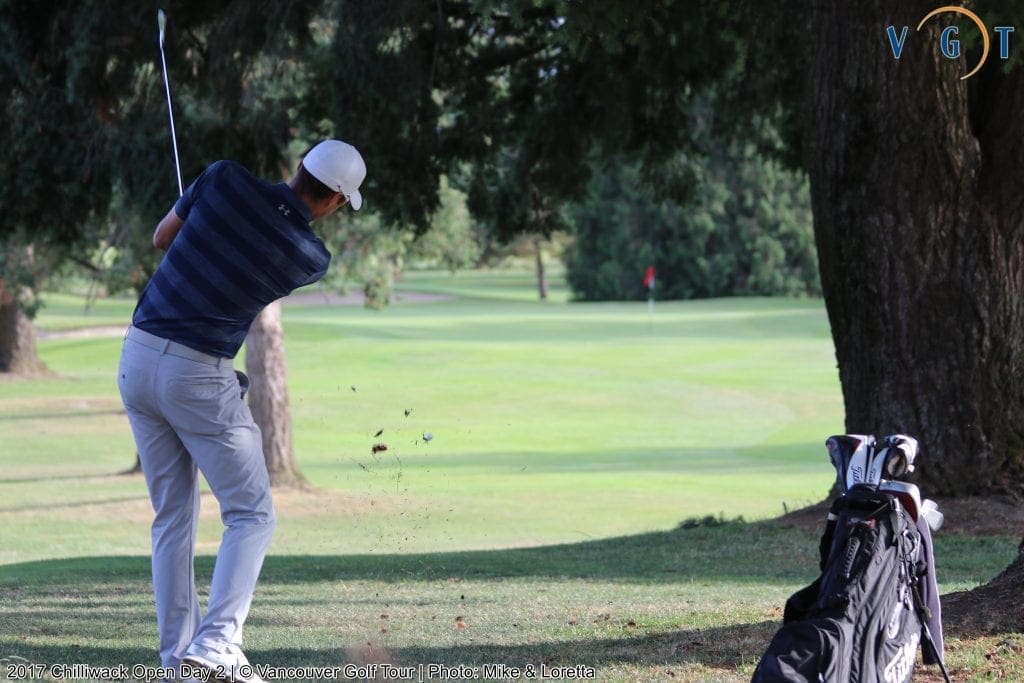 So what Allenby was facing was a 15 yard pitch shot straight up the slope for a chance at history.  A chance at being only one in so few who had broken the 60 barrier and shot 59.  He struck his pitch shot with precision and it took off up the slope towards the hole.  The crowd watched in anticipation hoping, cheering, willing his ball into the hole for the 59.  But for just a few inches off, and maybe the over-aggressive nature “don’t leave this short” in his shot, Allenby’s pitch ran past the hole and left himself with a testy downhill slider for par.  His bid for 59 was over.  But his equally as impressive bid to take away his own course record 63 was far but done!  When his 4-footer slipped by the hole and his uphiller tapped in for bogey, Allenby had done the unthinkable.  Set and re-set a course record all in the course of the same tournament.  Yes ladies and gentlemen.  Unbelievable!! All this while he crushed the current Chilliwack Open tournament record shooting -20, destroyed the previous VGT 36-Hole Scoring Record of -15 and yes crushed the Chilliwack Open field by a whopping 13 shots en route to the title! 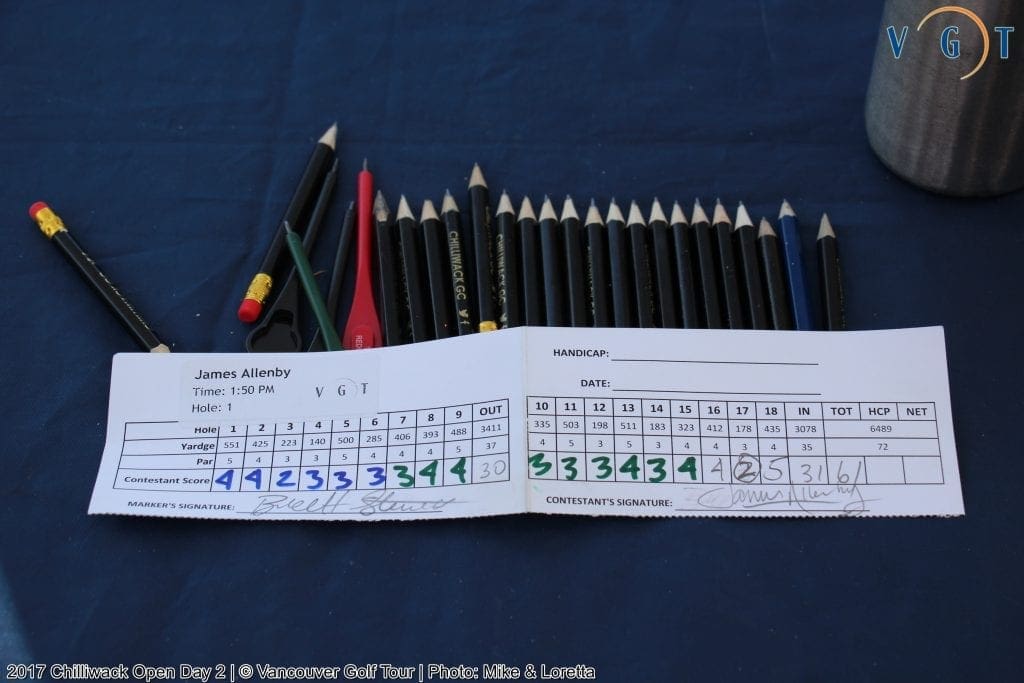 With this his 4th VGT Tournament win, James Allenby surged even further ahead of his nearest challenger Kevin Stinson on the 2017 SRIXON / CLEVELAND GOLF ORDER OF MERIT!  He cashed a cheque for $2,000 pushing his year-to-date earnings to just over $13,000 with 2 of VGT’s biggest events (Fraser Valley Open; Vancouver Open) still up for grabs! 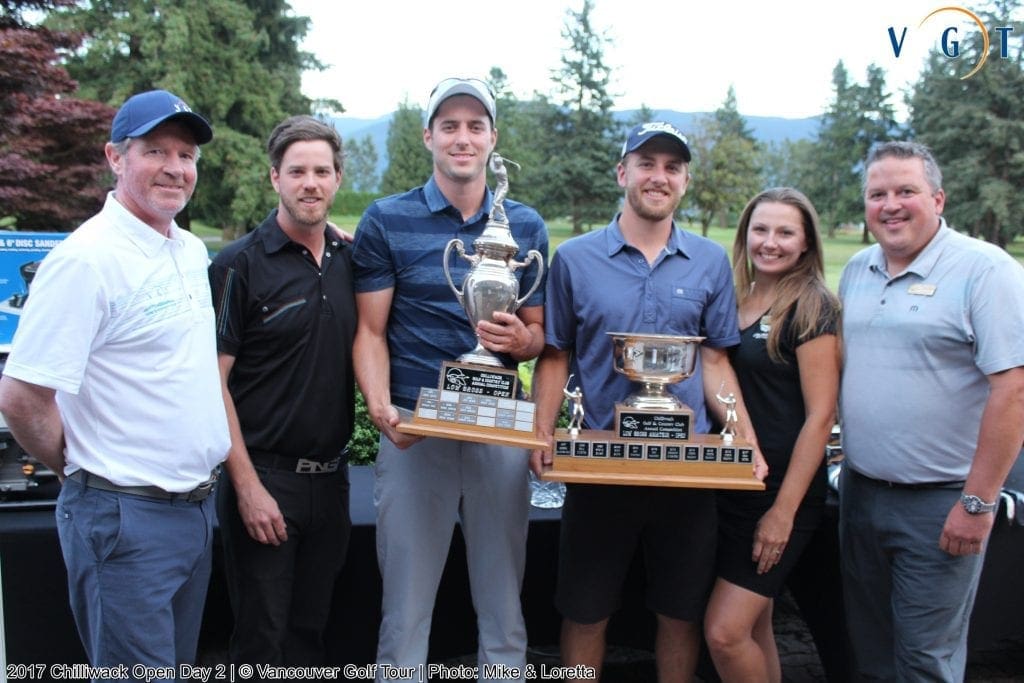 Congratulations to all Overall Pro and Amateur winners and flighted prize winners.  And special thanks to Chilliwack Golf Club for putting on one heck of a tournament once again!  A ton of work goes into this event all year and all weekend.  You are to be congratulated on your efforts making this one of the most entertaining and best coordinated tournaments in BC!