Although he did have a small gallery of his own (mum and dad, family) today, he was probably not the golfer on everyone’s radar to be leading the 2016 Vancouver Open after day one. Certainly not with PGA TOUR regular Adam Hadwin, and 35 Professionals in the field, of which a number are Mackenzie Tour regulars.

But apparently the 19-year old Marine Drive Golfers had something to say about that, opening up with a beautiful round of 65 (-5) on what many players were referring to as “US Open” type pins.

When Lu was interviewed after the round, he commented that he was pleased to see the draw for today. He was paired with fellow UW player Kevin Kwon (Pitt Meadows) and fellow Marine Drive Member Conrado Paderes. Asked if this helped keep him cool today, Lu stated “yes it was a pretty casual round today playing with 2 of my friends and colleagues that I’ve grown up to play with quite a bit in junior golf. When my coach at Marine Drive (Tod Kuspira) let me know that Adam Hadwin had committed to play in the event, I thought this is really cool. To be able to play in an event with a PGA Tour player in the field is a great experience for me. And I thought if I play well, maybe I will get the chance to play with him on the final day”. It looks like that just might be a possibility. 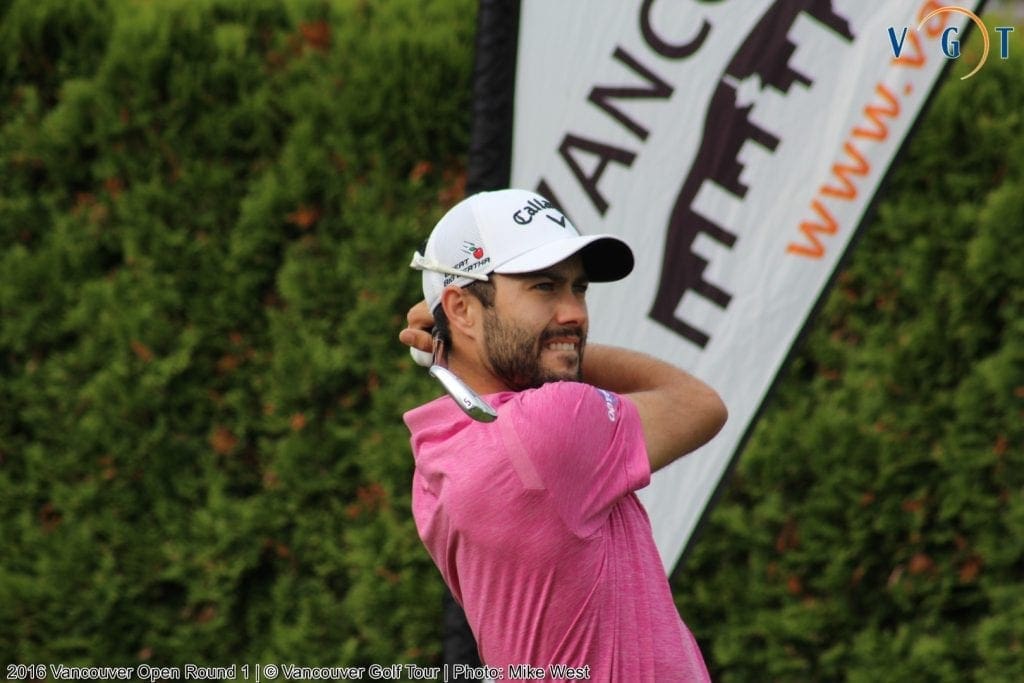 Tomorrow’s second round of the Vancouver Open at Pagoda Ridge will tell that tale. As of now, it is the PGA TOUR regular Adam Hadwin who will likely need a good one tomorrow at Pagoda Ridge to be paired with Lu on Sunday. He sits 4 shots back of Lu after an opening round of 69 (-1).

Hadwin had things rolling quite smoothly on his round after a stretch of 4 birdies in 7 holes got him to -3 on the day. But bogeys on 13 and 16 put Hadwin back to -1 and leaves him 4 shots off the overall lead, but only 1 shot off top Professional Cory Renfrew (Victoria, BC) who shot a tidy 68 (-2) of his own.

Renfrew sits T2nd thru 18 holes tied with 2 local Amateurs, Connor O’Dell (Chilliwack G.C.) and Kevin Vigna (Vancouver Golf Club) who both opened with rounds of 68 (-4). Local UFV Golfer Connor McClellan opened his round guns a blazing (-5) thru 9 holes, but had a tough finish to his day with a triple bogey 7 on 13 and a quadruple bogey 9 on his final hole. He would card a very respectable round of 72 and still finds himself in the mix thru 18 holes.

Some of the feature Round 2 Van Open pairings for tomorrow at Pagoda Ridge (Langley):

Round 2 Pairings for Pagoda Ridge Golf Course are enclosed in a PDF file and can be found on the link below. Final round pairings will be determined by 36-hole gross scores with leaders expected to tee-off at 12:00pm on Sunday at Pagoda Ridge.

Tickets are available online at http://vancouveropen.ca/tickets/ with proceeds going to the FIRST TEE of Greater Vancouver YMCA.

Link to All Round 1 Scores:https://www.golfleaguegenius.com/pages/291656

Vancouver Golf TourSaturday, July 2nd, 2016 at 4:48am
View on Facebook

Vancouver Golf TourSaturday, July 2nd, 2016 at 4:48am
View on Facebook