PGA Tour pro Nick Taylor got off to a red-hot start on his home course and cruised from there, earning a three-stroke victory on Friday at the Algra Brothers UFV Cascades Pro-Am presented by Cleveland/Srixon. 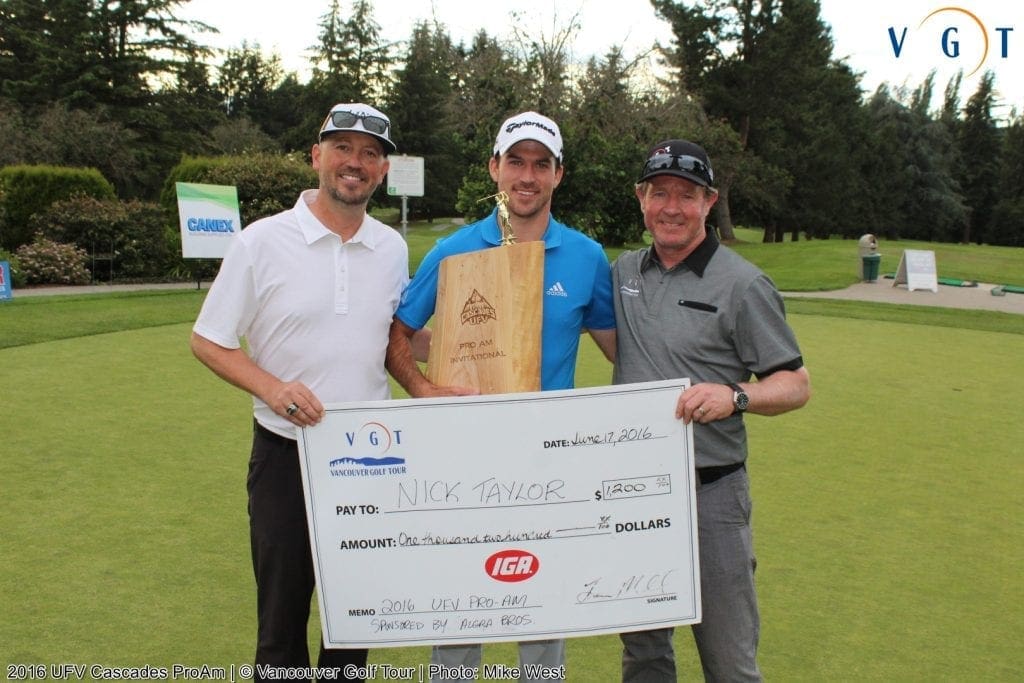 Taylor, a 28-year-old Abbotsford product in the midst of his second full season on the PGA Tour, tore through the front nine at Ledgeview Golf and Country Club in just 31 strokes, registering an eagle and four birdies against a single bogey. He played the rest of his round at even par en route to a five-under 65, three strokes ahead of runner-up Andrew Rasmussen of Vancouver (68) and four better than UFV Cascades alum Brett Stewart (69).

The tournament was a fundraiser for the UFV golf program, and doubled as an official Vancouver Golf Tour event.

“I got off to a good start, and I was driving well,” Taylor said afterward, reflecting on his round. “I was greenside on one, had a pitch on two, eagled five, birdied six. So I was five-under through six, and I coasted my way in from there. It was fun. The course is in great shape, and it’s been fun to play the last couple weeks.”

In the grand scheme of Taylor’s ascendant golf career, Friday’s victory is a minor blip on the radar. His resumé, after all, includes a PGA Tour win (the 2014 Sanderson Farms Championship), and he’s won over $1.5 million in the last season-and-a-half. His share of Friday’s $5,000 prize pool was $1,200.

But his mere presence was tremendously significant to head coach Chris Bertram and the Cascades men’s and women’s golf teams, which rely on the funds raised at this annual event.

“Obviously we were thrilled that Nick agreed to come out and support us today,” Bertram said. “We just can’t say enough about how good a person he is, and his interest in giving back to his community and growing the game of golf. We’re just so lucky to be beneficiaries of that.

“And as a nice bonus, we get to put his name on our trophy, which is really exciting. We’ve had some really nice winners of this event over the years, with (fellow PGA Tour pro) Adam Hadwin and (PGA Tour Canada winner and NCAA champ) James Lepp and a few other really good players.” 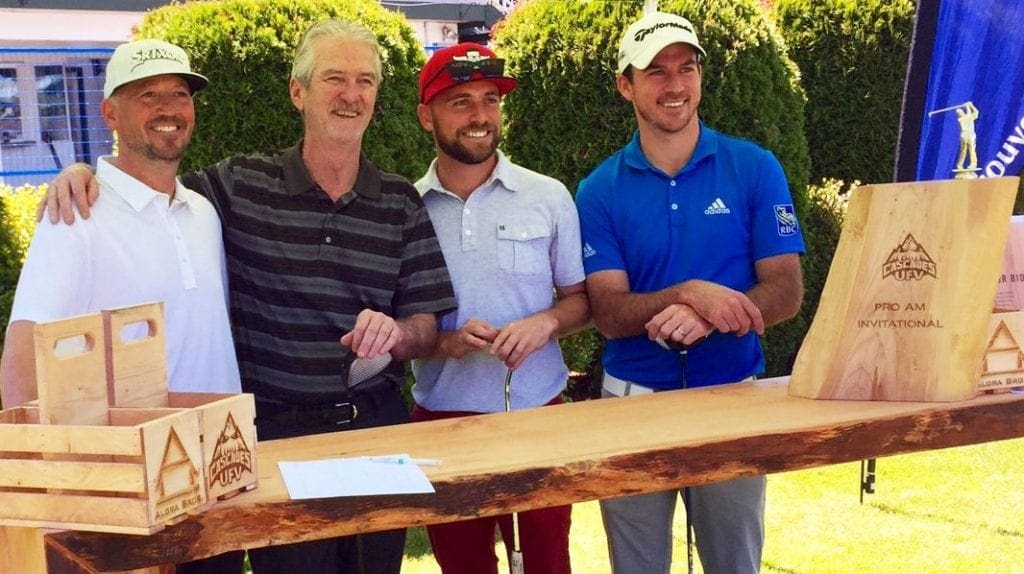 Taylor, for his part, called it “a no-brainer” to take part on Friday.

“The last couple years, I unfortunately haven’t qualified for the U.S. Open, so I’ve been home and it’s pretty easy for me to come out,” he explained. “It hasn’t been a big deal at all … if it helps them raise a few extra dollars, it’s great.”

Bertram’s plans to hold the tournament at Ledgeview were jeopardized when a fire destroyed most of the clubhouse in April. But he worked with Ledgeview staff to execute a new vision for the event. A tent in the parking lot housed the post-tourney festivities, and food trucks and craft beer vendors were on site to serve patrons.

“We kind of had to make something from nothing,” Bertram noted. “It’s worked out great – everybody’s having an awesome time, and I couldn’t be happier.”