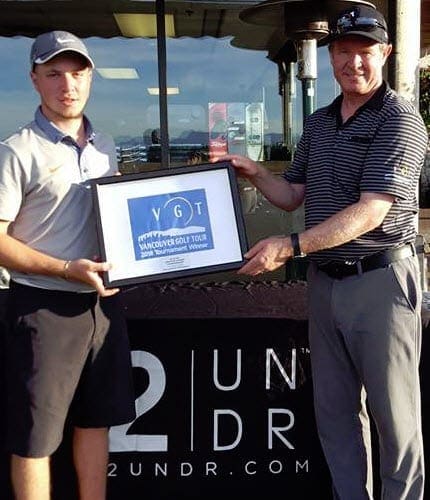 It came right down to the 36th hole to decide it, but 21 year old Vancouver Golf Club member & SFU Varsity Player Kevin Vigna defeated all 69 other players at this year’s VGT Amateur Spring Championship at Northview Golf & Country Club in Surrey.  Vigna ousted 2015 VGT Spring Champion Tyler Roope by 1 shot, earning the crown and a $350 Sponsor prize credit for his great play.

Conditions were much tougher than in 2015 where Roope shot an astonishing 2-day total of -12 to win by 7 shots. 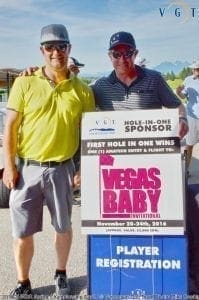 In Flight A action, VGT member William Murray carded rounds of 79,79 (158) good for a 2 shot win over 2UNDR Sponsor Brady Stoddard.  Murray’s performance was rewarded with a $350 sponsor prize credit.  But his day was really capped off in style with a perfect shot into hole #11 on Sunday where he won himself a FREE TRIP down to play in the legendary VEGAS BABY INVITATIONAL PRO-AM in November!! Viva Las Vegas!

The Flight B Title was taken by Swan-e-set Bay Resort’s Leo Min after he carded rounds of 79, 84, good for a 1-shot victory over Michael Taplin.  Min also earned himself a $350 Sponsor prize credit for the win, vaulting him to the top of the SRIXON/CLEVELAND Order of Merit point standings, some 900 points ahead of his nearest competitor Mike Hayman.