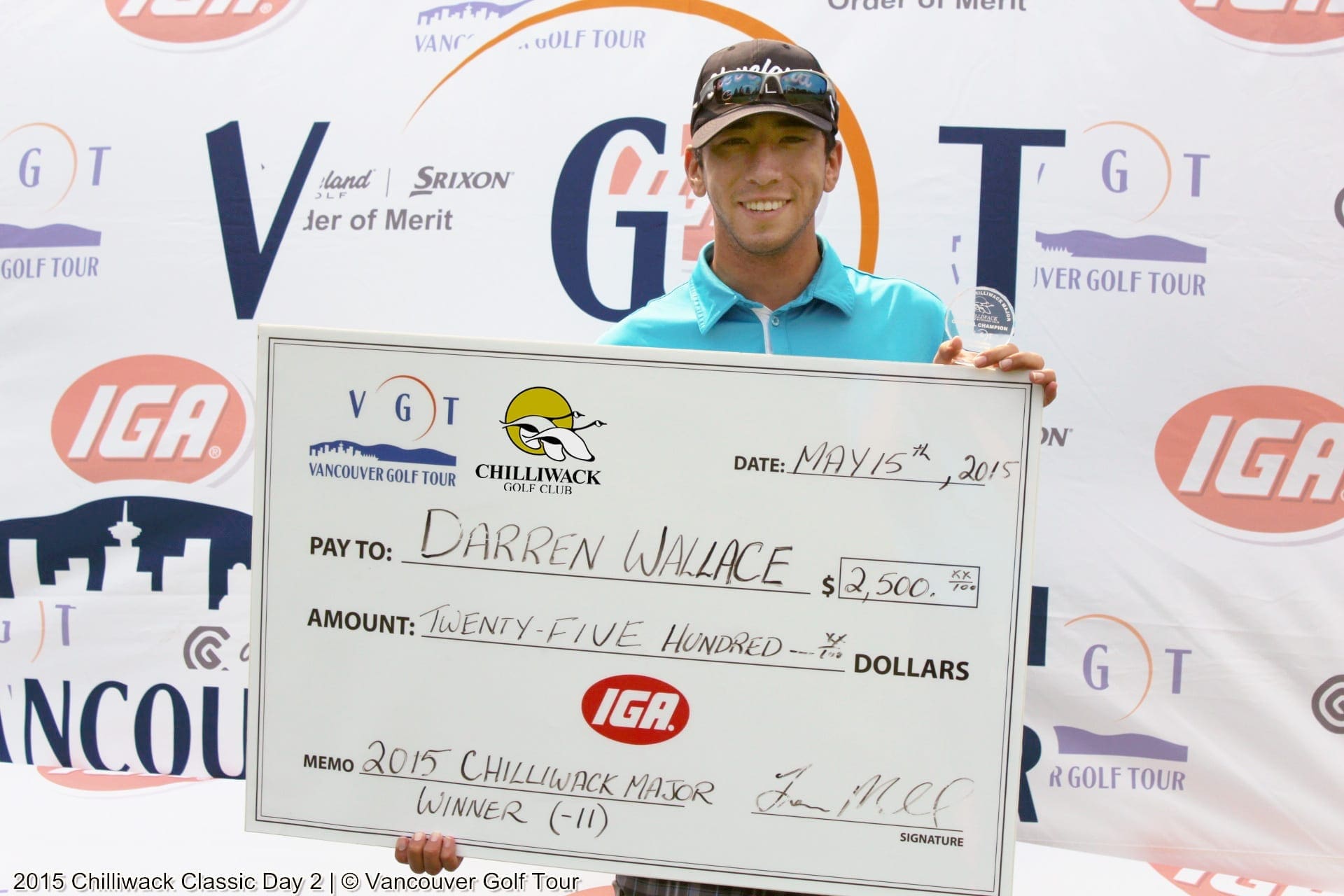 Congrats to Langley ‘s Darren Wallace on his fine round of 65 (-7) and 2 – day total of 133 (-11) to knock off  WEB.COM TOUR Player Ryan Williams on the first playoff hole at the Chilliwack Golf Club!

Both players finished the VGT Majors Series Event at -11 thru 36 holes.  Williams blitzed the opening round with a competitive course record 64 (-8) on the relatively new designed layout with par of 72.  Williams second round of 69 wasn’t quite good enough to withstand the challenge of Wallace who’s 65 included a run of 4-under thru 3 holes on 11 thru 13.

To see a short video of how the playoff hole on #16 went down, go to http://Facebook.com/vancouvergolftour

Congrats to Chilliwack GC’s Aaron Pauls on being crowned the Bushnell Low Amateur in the field, 1 shot clear of Connor McClellan, also of Chilliwack GC.

Hats off to all Pros who made it into the money for the $10,000 overall purse, especially to Chilliwack GC Teaching Pro Brad Clapp (-10) and Vancouver Golf Club’s Adam Cornelson (-9) who were challenging for the title on the back nine today!

No doubt all those at the top will take alot of confidence heading into VGT’S 3rd Major next Thursday at Sandpiper Golf Course and to the 1st event on PGA Tour Canada’s schedule on May 25th!

Congrats to North Van’s Bryn Parry for holding off Hazelmere’s Kevin Stinson for the coveted exemption into the 2015 PC FINANCIAL OPEN at Point Grey G&CC on May 25-31. Bryn was awarded the exemption into the event for being the top Pro on the VGT’S CLEVELAND/SRIXON Order of Merit not already exempt for the event! Our continued thanks to the tournament organizers of the PC Financial Open for extending the VGT a spot into this great event!

Please come out and watch Bryn and many of our VGT players playing the beautiful Point Grey layout.  Last year 2 of VGTs stars Brad Clapp and Eugene Wong were 1 shot away from a playoff for the title.

No doubt it will be an exciting weekend for Vancouver Golf fans to see who gets a jump start on the PTC season and one step closer to the WEB.COM TOUR.