In what was VGT’s Inaugural expansion across the pond, it was PGA TOUR Canada’s Harlingten and Hazelmere Golf Club’s Kevin Stinson who shared the 18-hole lead at 67 (-4) after round one on the Bear Mountain Valley Course.  Conditions were ideal in round one, and so 12 of the 36 players would finish at par or better on the day meaning 11 top CDN Professionals were within 4 shots of the lead heading into the final round, including PGA TOUR Canada Pros Cory Renfrew, Kevin Spooner, Allenby and Wheeldon one back at -3.

Players were greeted the next morning with fierce winds blowing at 40-50 km/hour on the first tee.  So much so that the VGT Starter’s Tent almost blew away on multiple occasions, staked down and all!  The swirling winds inevitably proved to make for higher scoring on the front nine until the wind subsided somewhat on the back nine.

It was Allenby who separated himself from the field on the front nine in the tough conditions, birdying holes 1 and 5 to keep his round at par, and then jarring it for an ACE on the 7th hole to move to 2-under par for the day and five under for the tournament.  But back-to-back double-bogeys on 9 and 10 would slow his momentum down.  And although he made a late charge with birdies on 17 & 18, he would finish in a tie for 2nd with Harlingten at 2-under par.  Harlingten really couldn’t pull any momentum out on the day, going 2-over on the front 9 and then trading a lone birdie with a bogey on holes 14 and 15 to shoot 72 (+2) on the day.

And so it was local Bear Mountain resident and ambassador Riley Wheeldon who toughed it out over the final 18 holes on the Mountain Course, just hanging in there on the front nine after an opening bogey on the par 5 first hole.  He would rifle off birdies on holes 11, 13 and 17 for a second round 68 and a 2-day total of 5-under par.

Wheeldon was interviewed by Times Colonist’s Mario Annicchiarico after the round:  “The front nine was blustery.  It calmed down on the back nine, but I came here and played three weeks ago and it was five times worse than it was today. It was windy and rainy and it was good preparation for what I had to do on the front nine,” said Wheeldon, who was playing the SwingThought.com winter and pro tours in Florida before heading back north of the border in preparation for the upcoming PGA Tour Canada season. 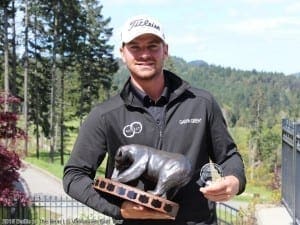 “I hit it really good. I didn’t make anything. I left putts short all day, but I played smart and hit the ball good. Anything under par today I figured had a chance,” he explained. “When it calmed down on the back nine, I thought I would have to go 3- or 4-under on the back.  “I saw some of the scores and they were behind me so I played it safer coming in than I might have otherwise,” added Wheeldon.

Wheeldon’s play was good for a three-shot victory over as strong a field in VGT’s Majors history.  Ultimately proving first that home course does indeed have an advantage and second that Wheeldon is set to prove he is ready for the leap from PGA TOUR Canada back onto the WEB.COM TOUR.  Wheeldon would later confess after his round that it was a game he played 3 weeks ago in “twice as difficult conditions with sideways rain” that made the conditions seem just a bit less difficult, and kept him cool on the day.  Wheeldon will play a few more events on the VGT schedule in preparation for his PGA TOUR Canada season.

It really is a great story having Riley win at home” stated VGT President and Commissioner Fraser Mulholland.  “He (Wheeldon) is not only representing Bear Mountain this year on tour, but he has just moved on site into one of their newest residential developments a few days ago.  So as Times Colonist’s Mario Annicchiarico put it in his column (HERE) “the $2,500 winner’s cheque served as a nice house-warming gift”!  Allenby and Harlingten both earned runner-up cheques of $1,350/each and Clapp and Renfrew both made out with $950/each out of the $11,000 Total Pro Purse.

“On behalf of the VGT Team and all players in the field, I would like to express my sincere gratitude to the owners of Bear Mountain Golf Resort for allowing us to host our first official stroke-play event on Vancouver Island” stated Mulholland.  “Thanks to a solid partnership, Bear Mountain Golf Resort truly have played a role in developing local golf and golfers, and providing the players on the VGT and Vancouver Island players a 36-hole Championship layout to test their skills in premier conditions and compete for some great prize money and amateur prizes”.

“Our Players and VGT Team were treated to incredible service throughout the event thanks to Director of Golf Jordan Ray, Golf Shop Sales Manager Chris Currie and the entire Bear Mountain Resort staff.   We are excited about the plans for next year’s event.  Plans are in the works already to make the 2016 “Battle at the Bear” even bigger and better and see Riley Wheeldon back at home to defend his title”.

“It couldn’t have worked out better,” Bear Mountain Director of Golf Jordan Ray said of having his sponsored player come out on top.  “It was good to get some of the Vancouver pros and some of the aspiring younger guys out to play our courses and it was good to showcase our property and all we have to offer. A fair amount of them hadn’t played our courses before”.

“It was our first Battle of the Bear and the first Vancouver Golf Tour event not in Vancouver, so we’re looking to build on it for next year and have an even bigger one.”

For full Battle at the Bear results, please visit https://vancouvergolftour.com/leaderboard

For the full story from Mario Annicchiarico of the Times Colonist, click http://www.timescolonist.com/sports/wheeldon-roars-in-battle-at-the-bear-golf-tourney-1.1868301