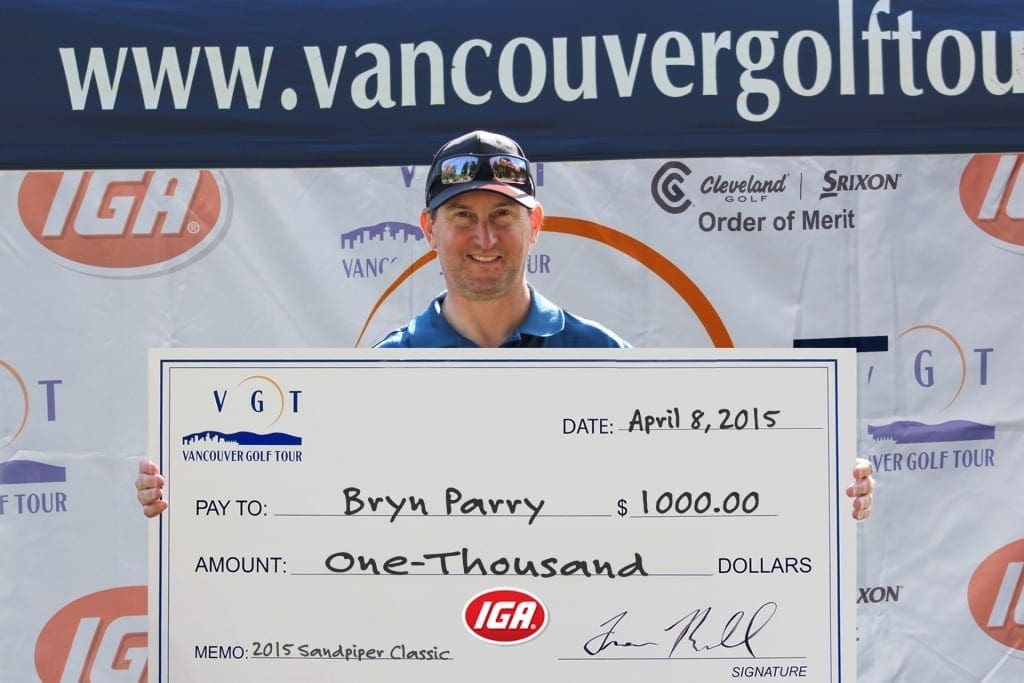 I guess it comes as no surprise when the 42 year old North Vancouver Pro wins on the VGT.  So when Bryn Parry rattled off five birdies on the front nine for a score of 31, no-one blinked.  Parry has amassed an staggering number of wins both on the VGT and in Professional Golf as a whole.  I think the last number I heard was over 150 wins.  Well, make that 151 after he cruised to a 5-under par 67 and good for a one shot win over fellow North Van Teaching Pro Oliver Tubb and Chilliwack’s Brad Clapp.  Parry earned $1,000 first place cheque and 1,500 CLEVELAND/SRIXON Order of Merit points, moving him up into a 3rd place spot behind Jeremy Paradis and Brad Clapp, who had his second runner-up finish in 3 starts.

Langley’s Jeremy Paradis leads the way for not already exempt Pros in the CLEVELAND / SRIXON race for the PC FINANCIAL OPEN Exemption.  Parry and Tubb lie 2nd and 3rd in this race for a chance to play in the PGA TOUR Canada’s event at Point Grey Golf & Country Club on May 25th.  The top VGT Pro on the CLEVELAND/SRIXON Order of Merit not already exempt into the event, at the end of the VGT CHILLIWACK MAJOR on May 15th will earn the spot to play at Point Grey.

On the Apprentice Pro side of the tournament, Eaglequest Coquitlam’s Jason Cordes claimed the title with a very solid round of 71 (-1), good for a $600 cheque and a four shot victory over Pagoda Ridge’s Steve Knotts.  The apprentice division has been instrumental to the development of some younger, less experienced Pros looking to gain confidence and play their way into the Tour Division of VGT.  Cordes leads the way on the Apprentice Order of Merit with two wins and a 4th place finish, 1100 points ahead of Lindemulder.

Golden Eagle Golf Club member Trevor de Keruzek shot a score of 83, which was good enough for the win over SPGA member Peter Jones.  Jones also fired 83 but lost in Golf Canada retrogression as de Keruzek had the better back 9 score.

Overall, 42 Professionals in the field played for just over $6,000 in prize money and the 44 Amateurs were offered a total of $2,500 in prizing and CLEVELAND GOLF / SRIXON / 2UNDR / TRAVIS MATHEW CLOTHING & PROJEKT LUGGAGE gift credits for the day!

Continued thanks to the whole admin team at Sandpiper Golf Course for laying out the red carpet for the VGT once again!  Ted Swaine and his staff are such a pleasure to work with and we will look forward to our next visit to Sandpiper at our 3rd VGT Majors Series evernt!  Thank-you to the owners of Sandpiper for their continued support of the VGT and helping us PREPARE TOMORROW’S CHAMPIONS!