Thanks to a 9-year partnership with local BC grocery chain IGA, the Vancouver Golf Tour launches into the 2015 golf season with a 30-event Championship schedule that projects $500,000 in Cash and Prizes to being awarded to local and International Golfers.   “We are extremely fortunate to have the support of such a great local company (in IGA) that has always had an interest in serving the BC Community” stated VGT Commissioner Fraser Mulholland. “What IGA (and supporting partners) have allowed VGT to do the last 8 years in player development is incredible.  Seeing two of our Alumni, Adam Hadwin and Nick Taylor graduate to the PGA TOUR, and Nick Taylor win just 4 weeks later is unimaginable!  We cannot wait to see who the next Adam Hadwin and Nick Taylor is to graduate from the VGT and move onto the PGA TOUR”

“For 60 years IGA has been improving the lives of  British Columbians by supporting local programs in our communities” stated Mark McCurdy, General Manager, Marketing & Brand Development at H.Y. Louie (parent company of IGA). “By supporting the VGT Tour as title sponsor since 2007, we are providing the necessary platform for young and aspiring golfers like Adam Hadwin and Nick Taylor to reach their goal of playing on the PGA Tour”.

“We are very proud to incorporate some great new events and Premier venues onto the VGT Schedule this year” stated Mulholland.  “Our opening event on March 23rd, The BRAD GARSIDE OPEN will be hosted at one of BC’s Premier Private courses, BEACH GROVE GOLF CLUB where conditions are bound to be top notch for our top local Pros and Amateur Golfers in the field”.

“On behalf of the Members and Management team, we look forward to welcoming the Vancouver Golf Tour to Beach Grove Golf Club in March 2015” stated Beach Grove Head Professional Brent Derrheim.  “At Beach Grove we are very honored to have the opportunity to promote local Amateur and Professionals who are members of such a well-established golf tour.  I am confident that all participants will enjoy our first class facilities along with our well-manicured layout. We look forward to seeing you in March”!

For the first time in 9 years VGT is expanding its Official Tour schedule outside the Lower Mainland thanks to some great partnerships from the facilities in those regions.  The first of six VGT MAJORS will launch across the pond in Victoria at the impressive Bear Mountain Golf Resort & Spa on April 27 & 28th.  “Thanks to Bear Mountain Management and ownership group, VGT will stage a first class Championship over the 36-hole layout for 100 players” stated VGT Commissioner Fraser Mulholland.  “This will be a great opportunity for the VGT players to test their skills on two first class Jack Nicklaus designs against some of Vancouver Island’s Best Pro and Amateur Golfers!  And We have chosen the dates strategically so we can attract as many quality international players who will be up in the Vancouver Island region to qualify for the PGA TOUR Canada the following week”.

“We are thrilled to be hosting an even such at this, that showcases some of the best young Canadian Golf Professionals” stated Bear Mountain Director of Golf Jordan Ray.  “These type of developmental events aligns with our commitment to not only help grow the game, but support our talented young Canadian golfers so they are able to compete on the world stage”.

The Vancouver Golf Tour will venture up into the BC Interior for the first time since its inaugural event in 2006, thanks to a partnership with three Kamloops Golf Courses that are working around the clock to make the event one of the biggest Pro-Am Championships in Canada.  The 54-Hole Pro-Am will be contested over three venues, starting with Sun Peaks Resort on day one followed by Rivershore Estate & Golf Links on day two and final round action at Eagle Point Golf Club.  Kamloops event coordinators are projecting a Pro Purse and Amateur prize table well over $60,000 if all goes as planned.

Thanks to a new Title Sponsor (Johnston Meier Insurance Agencies Group) and the support from both host courses, the 2015 Vancouver Open will offer Professionals a $100,000 Cash Purse with full field. The 2015 Vancouver Open will act as the 6th and final VGT Major of the 2015 season, and will offer the largest Professional and Amateur Prize purses in Western Canada off the PGA TOUR Canada rotation thanks to the two new golf courses on the Van Open rotation, Pagoda Ridge Golf Course in Langley and Ledgeview Golf & Country Club in Abbotsford!  “It is amazing to get the support from our new Title Sponsor JOHNSTON MEIER INSURANCE and from both Pagoda Ridge and Ledgeview Golf & Country Club this year” stated Mulholland.  They have all come together to allow the 2015 Vancouver Open to continue offering local golfers the opportunity to compete for significant prize funds and help launch their careers like the event has done for 2010 and 2011 Van Open Champion Adam Hadwin and 2013 Runner-up Nick Taylor.

For the second straight year the Vancouver Open will be making a move outside the City of Vancouver to host the 54-Hole Championship for Professionals and Amateur Golfers.  “Thanks to a solid commitment from the ownership group and management at both facilities, we are proud to announce that the Vancouver Open will be hosted at Pagoda Ridge Golf Course in Langley and Ledgeview Golf & Country Club in Abbotsford, BC” stated VGT Commissioner Fraser Mulholland.  “Our Committee decided that although the June date was strategically situated between PGA TOUR Canada events, it was on a weekend that caused too much conflict with long-standing Amateur events and BC Amateur qualifiers to draw a big enough field”.

The new dates (August 5 – 8, 2015) will attract a strong PGA TOUR Canada field as their tour will be finishing up in Calgary on Aug. 2nd with two weeks off before heading to their next event.  And as far as for the Amateur side, the August date poses no major conflicts with Amateur Golf within BC so the event should see some of the strongest Amateur golfers test their skills against the Professionals in the field for a chance to be crowned Vancouver Open Champion.

“We are truly excited to bring the event to one of BC’s greatest new Championship layouts Pagoda Ridge” stated VGT Commissioner Mulholland.  “The course is designed by local golf course architects Woodland Golf, who have sculpted a 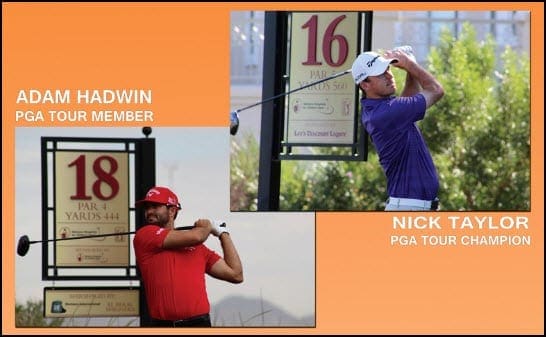 masterpiece overlooking the valley with a beautiful mountain backdrop.  Pagoda Ridge has hosted our Tour Championships two of the last 3 years and has always stood up to the challenge of the top players in our region. “And to have Ledgeview Golf & Country Club on the rotation, which prides itself on developing more PGA TOUR players than possibly any other course in the world will be a great story considering two of Ledgeview’s finest Adam Hadwin and Nick Taylor just launched their careers onto the PGA TOUR last fall”.

VGT Commissioner Fraser Mulholland will be doing everything in his powers to attract both Hadwin and Taylor into the field.  “I can only imagine the impact Adam or Nick would have on the event if they play the event.  I know for a fact it would take parking and spectator logistics to a new level…..which would be great problems to have.  But seriously, I understand both players have so many commitments on and off the PGA TOUR that it may not be possible, and we would completely understand if they were not available.  But I will keep in communication with both players and their schedules on a regular basis to give the BC Golf Community an opportunity to make plans to watch one or both of these great players at home if they commit to play the event”.

Ledgeview has hosted many local and Provincial Championships in the past 40-50 years including its own Ledgeview Open and the PGA of BC Assistant Pro Championships.  The events have always been well supported by the community and so the event will be sure to attract a great gallery to witness some world class golf.

The Vancouver Open will continue to offer Amateurs of all abilities the chance to share a day with an aspiring PGA TOUR player over 18 holes of golf and dinner at Pagoda Ridge at the Charity Pro-Am for the FIRST TEE.  Pro-am golfers and Championship Amateurs will have an opportunity to play for an estimated $25,000 in prizing and tee-gifts and some fantastic Hole-in-one prizes including a chance to shoot for $1MILLION at the Johnston Meier Insurance $1Million Shoot-out!

The 30-event Vancouver Golf Tour is proud to launch its 2015 Membership Program, offering its players some significant membership benefits this year for joining the tour.  Not only will players compete on some of BC’s Premier Golf Courses this year, but they will be offered some amazing prizing throughout the year thanks to our Partner Sponsors IGA, CLEVELAND/SRIXON, BUSHNELL, TRAVIS MATHEW & 2UNDR.  The Tour Schedule will wrap up with its Tour Championship in the first week of October.  Top players in each Amateur Division will be awarded significant Order of Merit prizing worth over $5,000 and our top Professionals will be awarded over $5,000 in Year-End Awards and Bonuses thanks to our Premier Sponsors, including our 8-year Order of Merit Sponsor CLEVELAND GOLF / SRIXON CANADA.