Here’s a summary of what I saw from today’s action out at the Shriner’s:

Adam Hadwin tee’d off at 10:20am off the 10th tee on Saturday at the Shriner’s Hospital’s for Children’s Open so I followed him first and he got out of the gate like he was on a mission to make amends for some sloppy play yesterday and move up the leaderboard.  A 10 footer for birdie on #10 followed by an amazing up and down on 11 and a quick birdie on 12 and Hads was on his way.  Another birdie on 15 after his drive pitched to the front edge of the green before rolling back down the hill, and Hads was -3 for the day.

Hads then bombed his drive 310 yards, leaving him with a 5-iron in hand to reach the par 5- 16th hole.  His shot came off the club starting at the flag, but started to leak ever so slightly right and caught the bank of the green and trickled back into the water.  One more yard and this would have left Hads with a 20 footer for eagle to get to -5 for the day and -8 for the tournament.  However, the point of entry left him with a fairly delicate pitch back across the water to the front pin.  And when Hads caught his pitch slightly fat in the water, he would exit the 15th with a triple bogey 8 and back to -3 for the tournament.

Hadwin persevered throughout the day, and never for one minute showed any signs of frustration or anger.  In fact, he was caught joking to his playing partners on the 16th green before tee-off and then stiffed his iron shot to 10 feet.  A lip-out here and Hads was still smiling heading down the 18th fairway, and why not when his “Army” shouted from the gallery “Good luck Adam” holding up giant flash cards of A D A M.

Hadwin would continue to battle with on his inward nine, carding another 3 birdies including those on 16 and 17 to finish the day at -2 and 5-under for the tournament.  Not how he had dreamed up the round, but with the amount of low scores on the day this left Hadwin optimistic that he could climb up the board with a low number on Sunday.  From my take he is certainly hitting it well enough to be in contention, and considering he is 5-over par on the 16th hole alone when most guys are -2 or -3, this one hole alone would leave Hadwin at -11 or -12 if he had played the hole to the field’s average.

With Nick Taylor tee-ing off on the opposite nine, it made chasing down the story of both VGT alumni a bit more challenging.  So I honestly didn’t get to see Nick play until he reached the 7th green.  And by then I had already heard the story from another Canadian follower that Nick had made a quadruple bogey on the 3rd hole after he had made a birdie on his opening hole of the day.  Taylor had blocked his tee-shot on the hole and been given a big break with his bounce off the cart path back where he had a clear view to the green.  Ultimately, in Taylor’s words after the round, “We miss-judged the distance of the shot and didn’t take into effect the difference in the temperature this morning as the ball just wasn’t flying out as far as the last two days”.  His ball ended up coming back into the desert short of the green, and after one attempt to clear it out of the hazard and another shot into the green-side bunker, Taylor was left shaking his head in disbelief at what just happened.  “I honestly can’t remember the last time I made an 8” joked Taylor after the round.  “It was a touch stretch of holes the next few just processing what just happened.  But when I think back on it, I hit the ball really quite well other than three swings including the one on 3, my drive on 9 which I hooked and I had to pitch out sideways, and on 16 where I thought I hit it great and ended up just short in the water.  These 3 shots cost me a total of 6 shots so other than that I am still positive about how I am playing and I have to go out there tomorrow and just make less mistakes and see how low I can go”.

The story of Taylor’s round was almost a mirror image of Hadwin’s in that after making an 8 early on in the round he too continued to be patient and made a few birdies on his inward nine after opening with a 4-over par 39 on the front.  He would finish at 73 for the day and -4 for the tournament and he too could be right in this tournament if he had 5 or 6 holes back where his mistakes made him pay.

Both players managed to do what it took to avoid the PGA TOUR’s secondary cut, which eliminates an excessive amount of players who made the cut when the daylight does not permit them to finish on Sunday in 2-somes.  This cut was at -3. 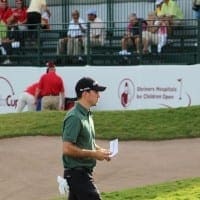 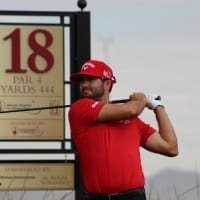 Taylor will set the way at 7:45am off the 1st tee playing with Bo Van Pelt and Hadwin shoots off at 8:47am playing with Kyle Reiffers for the 2nd day in a row.  For both players this Sunday is about minimizing the mistakes and continuing to give themselves as many birdie chances as possible to move up the board and put some cash on the board early in the season.  Particularly more important for Taylor who is not fully exempt, so the more he can bank early on, the higher his priority rank will be to decide if he gets into events or not.

No matter what happens tomorrow, one thing is for sure.  Both players will have a sizable group of Canadian fans cheering them on as well as Ontario’s David Hearn who shot an impressive 66 today to jump into a tie for 9th.