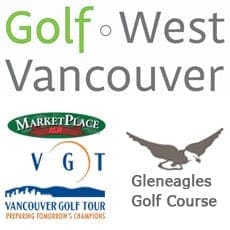 Tomorrow will be as much a celebration at West Vancouver’s Gleneagles GC as it will be a professional shootout. And it should be.

Newly minted PGA Tour players Adam Hadwin and Nick Taylor, along with last week’s PGA Tour Canada Tour Championship winner Ryan Williams, are back home in British Columbia. They will headline the 3rd Annual Vancouver Golf Tour – Golf West Vancouver Shootout. Joining the highly touted trio in the field are North Vancouver’s Eugene Wong and Bryn Parry, Gleneagles head pro James Presnail, three amateur qualifiers and a member of the B.C. media. On the line is a total purse of $2,500. Junior caddies will be assigned to the players; spectators are welcome to come out and watch for free and anybody in attendance can enter a hole-in-one contest for a chance to win $100,000. Oh, and the first 200 spectators on the Gleneagles grounds receive a free hot dog and Haagen-Dazs ice cream.

Taylor is the event’s defending champion and, like Hadwin, Williams and so many other British Columbia-based professionals, the Web.com Tour graduate first cut his competitive pro teeth on the Vancouver Golf Tour (VGT). He credits the tour, in fact, with a key role in where he is today and where he will be in a few weeks – on the PGA Tour.

“The Vancouver Golf Tour gave me a place to play at home against some good competition as I prepared for what was then the Canadian Tour,” said Taylor, who gained his PGA Tour card Sunday through the Web.com Tour Championship with a final-round 63. “The VGT helped give me the confidence that propelled me to compete during those seasons and has been a big part of my development as a professional.”

Eight years after it was started the VGT has become one of this country’s most compelling golf success stories. Its mission statement, ‘Preparing Tomorrow’s Champions,’ has remained in place since Day One. The tour offers British Columbia pros and amateurs the opportunity to play against high-level competition in a PGA Tour-like setting as the players gain confidence and experience to handle the rigours of professional tour golf.

Behind this rather impressive agenda and 47 (yes, 47) Vancouver Golf Tour-operated events each year is Fraser Mulholland. The veteran tour player/swing instructor founded his British Columbia-based tour in 2006 and has watched over it like a father does a child ever since. He’s added outstanding local and regional sponsorship, received much-welcomed media attention and acquired outstanding support within the B.C golf community.

“As difficult as it is to get to the PGA Tour, the VGT serves a meaningful place for young aspiring players,” says Canadian Golf Hall of Fame member and former PGA Tour veteran, Richard Zokol. “Players such as Adam Hadwin, Nick Taylor and Roger Sloan have been able to keep their game sharp when at home by playing in the VGT in the couple years prior to getting to the big league. But it also allows those who aspire to being the next Hadwin and Taylor to compare themselves against them and state that, ‘If they can do it, so can I.’ Something else it does is allow young players like Adam Cornelson and veterans like Bryn Parry to build their belief system. The VGT has found a very nice fit.”

Events start in March going through to October. Mulholland offers a two-day Major Series for the players and refuses to do anything that compromises the mission of player development. That seems to be working. In 2013 the VGT had 15 of its players attend PGA Tour Q-School. This year three of its members in Hadwin, Sloan and Taylor will play on the PGA Tour.

“I myself had dreams of being on the PGA Tour and saw the challenges of travel, spending money to do that, playing. It’s incredibly difficult,” Mulholland said in an interview. “I saw so many other talented players from B.C. trying to do the same thing right alongside me but they never made it past the third or fourth year either because they ran out of money or ran out of sponsorship support. The reason we put the VGT in place was to make the dream more affordable, to give the talented players with aspirations more places to play competitively and help them learn how to win and how to be champions. To win on our tour is incredibly difficult. So to do it locally and very cost-effectively from home, whether they are on PGA Tour Canada or not, they have a chance to do it from their backyard, while spending less than five grand in expenses and entries.”

To call Mulholland’s work noble in the realm of professional golf in this country is quite an understatement. Not only is the VGT’s founder, president, commissioner and on-going visionary a credit to the development of golf in Canada, but he’s accomplishing his task by forging excellent relationships with the host venues and local corporations. MarketPlace IGA in Vancouver is the tour’s title sponsor. Mulholland has also added a rather extensive listing of other multi-level corporate supporters and suppliers. The VGT’s official charity is the First Tee of Greater Vancouver.

How impressive is what Mulholland has accomplished? Over the past six years, the VGT has paid out over $1 million in pro money and amateur prizes.

“Nick (Taylor) is a perfect example of how guys can use the VGT to their advantage,” Mulholland explained. “Last year he played so great on our tour he won almost as much money playing the VGT as he did on PGA Tour Canada. That was huge for him. Making $70,000 instead of $35,000 is big. Sponsor money is at a point now where I can run the VGT at an operational level and not have to worry about my teaching income. Hopefully where we’ve come to will also start to allow me into the board room with some bigger corporations. Until then we have a tremendous tour main sponsor in MarketPlace IGA and equally supportive companies backing us. They deserve a lot of credit. We’re growing a little bit each year too. Who knows, one day we might run a PGA Tour Canada event ourselves but until then we are certainly proud of how far the VGT has come.”

What makes the VGT all the more interesting in terms of its platform is the amateur component Mulholland has put in place. Since many highly skilled amateurs aspire to become professionals one day, the VGT’s format of the amateurs playing alongside the pros in the same groups offers those players an apples-to-apples comparison of how their games stack up against the best.

“The last couple of years we’ve seen more of the college players utilize the VGT to stay sharp for college and university schedules,” Mulholland added. “But this helps them answer some of their questions if they’re playing in fields, in multiple-day events with pros. They get a sense of where their games are compared to some of the best pros in B.C and by extension some of the best in Canada. I think it’s vital for young amateurs. They play the same course, same conditions; same setup and to see where they compare. That gives them an idea of what they need to do to take next step. No, the VGT is not just a pro tour. It certainly gives amateurs a chance to play highly competitive golf before they make that key decision to turn pro.”

After a whirlwind week concluding the Web.com Tour season, it’s surely been a busy past few days for Hadwin and Taylor. Both went through the day-long PGA Tour orientation at TPC Sawgrass Monday and have had an on-going schedule of interviews and media ever since. Hadwin, in fact, was on hand in New York earlier this week to ring the NASDAQ closing bell. All of it won’t stop either from being at Gleneagles tomorrow morning to help reciprocate the support from Mulholland and the Vancouver Golf Tour.

“Fraser has done an amazing job along with all of his VGT team,” Taylor said. “I’m happy to help him whenever I can.