After what he would call a fairly sluggish start to his 2014 tournament season, North Vancouver’s Bryn Parry was back to his normal form these past 2 ½ weeks.  Starting with a convincing 6th Chilliwack Open win on July 19,20th, Parry then went on to finish in 3rd place at the $175,000 Canada Cup (run by the Quebec PGA).  Parry continued his run of good form this week at Squamish, albeit a tad “roller-coaster-like” with a 5-under par 67 and 2-shot win!

Parry’s round got off to a great start, birdying four of his first 6 holes before being railroaded by a double-bogey on 7 and another quick bogey on 8.  But in true Bryn Parry fashion, he went back to work, very business-like as he does, eagling the par 5, 12th and then finishing with 2 more birdies on 16 and 17 to close with a fairly ho-hum round of five-under par 67.  “Other than a couple of loose swings on 7 and 8, I hit the ball great and made some putts out there today.  The greens were spectacular and anything you looked at from 20 feet had a great chance of going in the hole if you got your line and speed”.  Parry went on to praise Squamish Valley Golf & Country Club at the prize presentation.  “If any members are in the clubhouse, you should all be very proud of the golf course you have.  It is a true gem and your grounds team continues to do a fantastic job of grooming the course in championship like conditions.  We appreciate your support hosting the VGT every time we come up”.

Parry topped a field of 34 Professionals by 2 shots over Chilliwack Golf Club’s Jared Rempel and Northview Golf Club’s John Shin.  Both players had enough birdies on their cards to catch Parry, but both also had a couple of bogeys each to keep them out of the winner’s circle.

In VGT’s Apprentice Professional Division, two club pros were tied at the top with scores of 73 (+1).  Jason Cordes of Golf Town North Vancouver and Greg Pool of Marine Drive Golf Club both won cheques for $375 and continued to move up the CLEVELAND/SRIXON Order of Merit with some valuable points in the race to decide top Apprentice Pro and $500 bonus prize.  Currently Pool sits only 200 points ahead of Hazelmere’s Callum Robinson 900 points over 3rd place Jeff Lindemulder of Morgan Creek.  The final few VGT events will prove critical to decide this year’s Order of Merit Winner!

VGT’s next Professional event on the schedule is Monday, Aug.11th at the Flora Aasen Memorial Pro-am at Richmond Country Club and the 54-hole FRASER VALLEY OPEN on labor day long weekend at the Falls, Sandpiper Golf Course and Chilliwack Golf Club!  With more than double the order of merit points for this event, it should prove to be a pivotal event on the VGT schedule!  Fraser Valley Open details can be found here: https://vancouvergolftour.com/schedule/fraser-valley-open/. 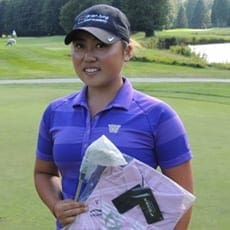 In the Amateur side of the Squamish event, 21 year old Coquitlam golfer SooBin Kim won for the 2nd time in just 4 days on the VGT, equaling Parry’s score of 67 and blitzing the amateur field by a total of 10 shots!  As she commented in her post-round interview, Kim kept her play very steady and she fed off the confidence of each birdie she made.  Bin managed to keep her card clean of any bogeys with some tidy short game play and with 5 birdies on her card this gave her some positive feelings after the round.  “It’s been great for me to get some VGT tournaments in this and last week.  To play in the same fields as some of the top Professionals in BC is great and gives me a lot of confidence when I can score a 67 and tie a player like Bryn Parry with all his accomplishments.  I look forward to playing one more VGT event at Mayfair Lakes on Aug. 17th to stay sharp in preparation for the LPGA Qualifying School in a couple of weeks’ time” said Bin.  “If I get some status on the LPGA Tour or Futures Tour (LPGA’s version of the WEB.COM Tour), then I will turn Professional and prepare for the 2015 schedule.  If not, I may consider staying amateur for one more season to play the Canadian and U.S. Amateurs before turning Pro”.

Kim has come off her best year yet down in College golf where she played for the University of Washington Huskies and set a University record for scoring average in NCAA Div.1 competition (71.97).  She also added one more win to her Collegiate career for her 2nd in 2 years and was unquestionably UW’s top player for the last 2 seasons, taking her team to Nationals with her exceptional play.  On the VGT, where the women play against the men (off equitable tee-lengths), all I can say for our event at Mayfair Lakes is “Look out Gentlemen!”

In other flight action, VGT regular Masa Takahashi took home low gross honors in Flight A with a score of 78 while our 2nd female (Nancy McMillan) was victorious in defeating all the male golfers in B Flight with a gross score of 86!  I think it’s safe to say that Nancy likes Squamish Valley since she and her husband Jeff Sheldon were also victorious in the Squamish Valley Mixed Classic last week for the 2nd year running!  Well done Nancy!!