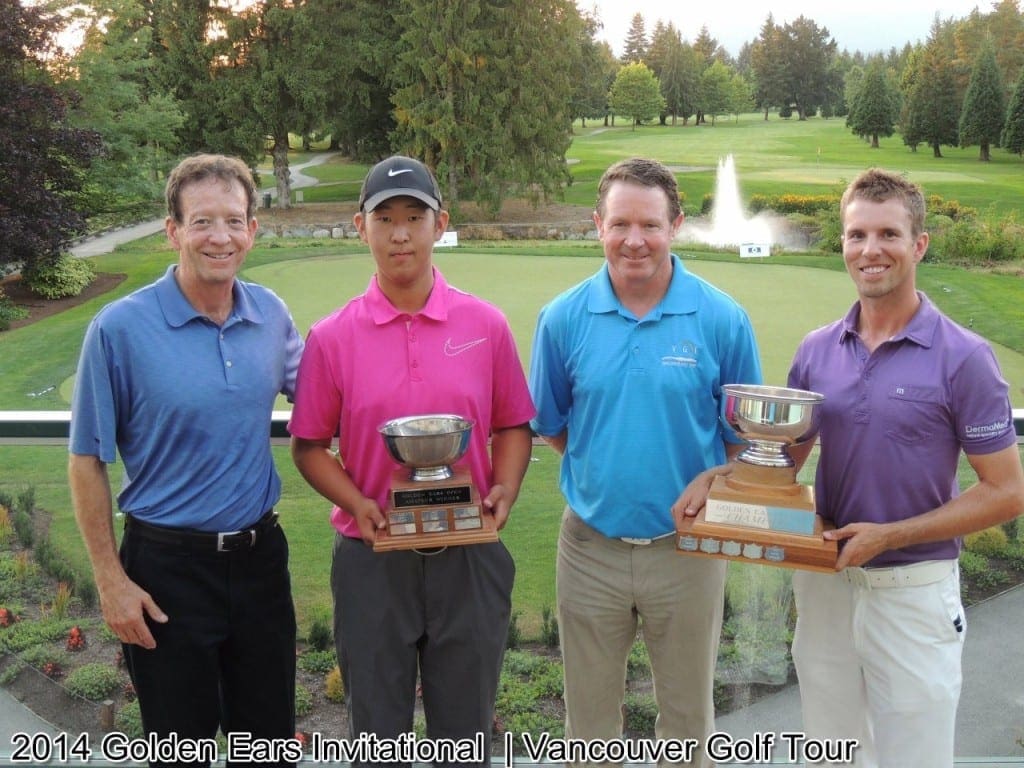 The 45th Annual Golden Ear’s invitational hosted yet again a full field of 168 Amateurs and 40 of BC’s Premier Golf Professionals at the Pitt Meadows Golf Club.  With the golf course seeing some precipitation earlier in the week, the golf course was beautifully lush and the greens were receiving nicely, opening up for some low scores on day one.

Through 18 holes of the event it was VGT’s hottest young player Nathan Leonhardt that lead the way with a dazzling round of 65 that included a scorching 31 on his back 9.  Cape Town’s Michael Loppnow was 1 shot behind while a group of 3 (Ryan Williams, Oliver Tubb and Jared Rempel) were 1 more shot back with rounds of 67.

When Burnaby’s John Shin made the turn in 31 (-5) in Round 2 it looked like he was on his way to threatening the course record 63 set by Abbotsford’s Nick Taylor in 2013.  He continued his assault with birdies on 10 & 11 to get to -7 for the day and the 59 watch was officially on!  However, a quick bogey on #12 slowed Shin down through the back 9 as he would proceed to par his way thru the next 5 holes before he added one final birdie on 18.  In at -9, Shin looked like he was in solid position with only a few groups to come in.  But the excitement was just starting behind him, and the fans would be in for a treat seeing who would challenge him down the home stretch.

First it was North Van’s Bryn Parry, who opened his event with a round of 69.  Parry made the turn at -6 for the tournament and went onto birdie #10 to be within 2 shots of Shin at the time.  But his back 9 would be just too erratic to be a factor, bogeying 12 & 13, birdying 15 & 16 but throwing his momentum off again with a late bogey on 17.  Parry would finish -6 for the tournament for a T6th finish.  His 14 birdies were plenty enough to win the tournament, but 8 bogeys were just too many for him to contend.

The next 2 challengers would come up just one shot shy from making it into a playoff with Shin.  First The Redwood’s Head Professional Doug Morgan made a nice move after his opening round of 69.  He had it to -4 on the day thru 11 and birdies on 14 and 18 would have had him in the playoff would it not been for a bogey on the 12th hole.  Seymour Creek’s Oliver Tubb, who has had a great year to date (wining the PGA of BC Assistant’s Championship) made his own move up the board early with birdies on 1 and 4 to reach -7 for the tourney.  Bogeys on 9 and 13 haulted what would have been a second straight 67, but unfortunately left him 1 shot off the lead at -8.  Both he and Morgan pocketed cheques for $1,050 each for their T3 positions.

The last challenger to Shin was Richmond’s Nathan Leonhardt who has had quite a run on the VGT, winning 2 of his last 3 events.  Leonhardt has been playing the PGA TOUR China this spring and has made 4 cuts out of 5 events including a t18th finish in his last event.  After his birdie on the 2nd hole in round 2, Leonhardt was playing solidly but just not making the birdies drop.  So thru 9 holes he was tied at the top with Shin at -8.  But when he failed to convert birdies on the next 4 holes and shin making his move, he would sit 1 shot back with 4 holes to play.  And when he made sloppy bogeys on 15 and 16 to move him apparently out of the running at -6 (3 shots back), Leonhardt would need to do some soul searching to have any chance in this event.

And he did just that on the side of 17 green, where he told himself “I just need to chip this in and I have a chance”.  And he buried his chip to get to -7 and find some much needed momentum coming down the reachable par 5-18th.  After two great shots, Leonhardt found his ball within 15 feet of the hole and he stepped up with confidence and nailed his eagle putt that put him to -9, tied with Shin and force a playoff! 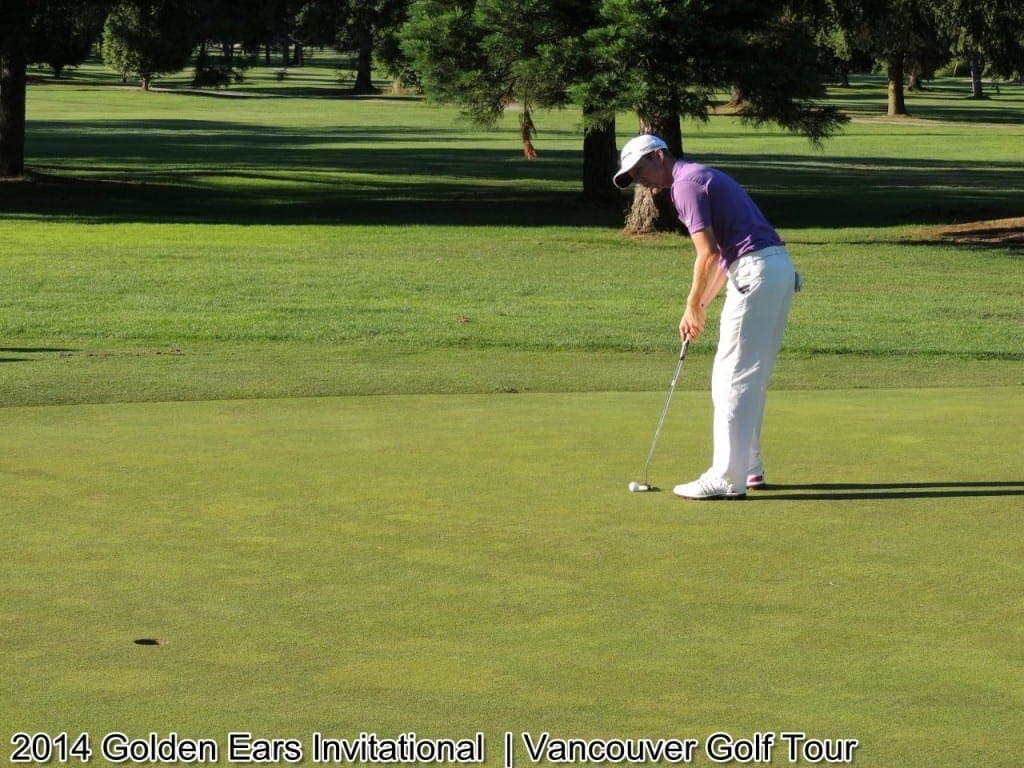 Nathan Leonhardt nailed his eagle putt that put him to -9, tied with Shin and force a playoff!

As it so often happens, the player who comes into the playoff with the most momentum usually wins.  And Leonhardt continued to play with confidence, hitting the 1st hole in 2 and 2-putt for his birdie and the Title!  Shin’s drive was slightly errant on the right tree line, but he would have to punch sideways and inevitably would make a bogey.

In the Amateur competition 18 year old Pitt Meadow’s Junior David Lee made hard work of it coming home, but would end up birdying the final hole for a 2-shot lead over Coquitlam’s Kris Yardley, Pitt Meadow’s member Gudmund Lindbjerg and Vancouver Golf Club’s John Gallacher, all at -1.  Top Net score went to Russell Westcott who had a 2-day net total of -11.

VGT would like to recognize some very special people involved in the execution of the 2014 GOLDEN EARS MEN’S OPEN.  First off, a huge special thanks must go out to Tournament Chair Frank Hoadley and the 40+ Pitt Meadows members who volunteered their time to make the 2014 GOLDEN EARS OPEN a huge success once again!!

“So much goes into an event like this, and we were extremely proud to be welcomed into the tournament for the 7th straight year” stated VGT Commissioner Fraser Mulholland.  “I can’t thank Frank (Hoadley), Neil (Roberts) and Michael (Pierce) enough for believing in VGT and for allowing us to assist in the tournament operations again this year.  It really was a lot of fun working with everyone this year”. (definitely in the most comfortable office environment to date!)

I would like to pay tribute to the tireless efforts of our VGT Team members who put in extraordinary long days over the weekend (1/2 days right guys?).  VGT would not be able to shine as it does with our LIVE SCORING without your continued dedication to the task.  Thanks so much “A TEAM”!!

Final thanks must go out to all of Pitt Meadow’s Golf Club’s Team Leaders who together have put on one of the most Professionally run golf tournaments for 45 years running.  Your commitment to the amount of ‘extra’ hours that surround the event (including endless player correspondence and communication) is truly amazing and you should all be congratulated for surrounding yourselves with amazing people within your Team:

Our gratitude goes out to Pitt Meadow’s Golf Club members for believing in the GOLDEN EARS OPEN for 45 years!  Your continued support of the golf community by hosting this event is truly making a difference to the lives of many golfers (amateur and Professional).  You should be very proud of the event being looked upon as one of BC’s Premier 36-Hole Golf Tournaments, showcasing one of the Lower Mainland’s top Private golf courses!

VGT was very proud to be a part of the GOLDEN EARS MEN’S INVITATIONAL for the 7th straight year.  We have seen so many great changes to the club in these 7 years and look forward to being a part of the event in 2015 where the players will be privy to one of BC’s premier golf courses AND practice facilities.  The practice center improvements look like they are going to be amazing!   You will have one of the very few practice grounds where players can learn the game of golf off grass tees and have some real-life targets to simulate REAL GOLF while practicing!