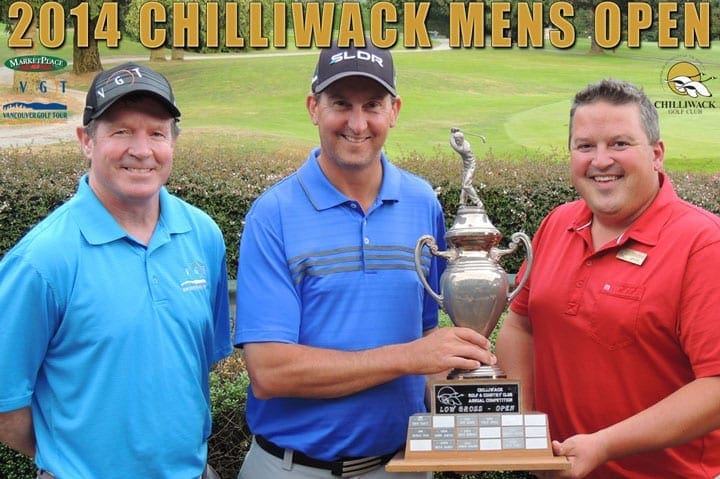 Setting a new Chilliwack Golf Club competitive course record (65) on day one left everyone believing Bryn Parry would be a runaway winner at the Chilliwack Open for the 2nd year straight.  But local amateur (now reaching celebrity status) Kerry ‘Grit’ Grittner went onto make the 2014 Chilliwack Open one to remember when he tied Parry (and the competitive course record) in the afternoon draw.  Playing off a 4 handicap, “The Grit” would later comment that this was his best competitive round of golf ever, but not his all-time best score (he was quite a player in his younger amateur days! )

Joining Parry and Grittner in the final group on Sunday would be Chilliwack Professional Chad McAdie (68) and Tobiano Golf Resort Pro Ian Henson (69).

But before Sunday’s round ensued, all 200 Chilliwack Open competitors and guests were treated to one of the funnest evenings of festivities in the BC golf scene.

First off, players and spectators had an opportunity to win a free hot dog and beer at the legendary 15th hole Beer Garden via the club’s Facebook contest. And while they enjoyed this good Chilliwack Golf Club hospitality they would see some good, bad and ugly shots come into the drivable 15th green from the bleachers set up a-la Phoenix Open (mini-style).

Once all players completed their Saturday rounds, the festivities continued inside where some of Chilliwack’s premier restaurants served up some of their famous specialties, including gourmet sushi and some amazing Cactus Club appetizers and dessert served up by their lovely wait staff!

The band kicked the night up a notch and got the (younger) crowd going (at least that’s what the video shows!!)

All in all a great evening for the players, adding incredible value to their tournament entry.

Day 2 commenced with a sprinkle of rain but would let up by mid-day where the low gross scores in the field would tee off!

One would have thought that low score on day 2 would have come from one of BC’s top Pros, however it came from yet another local amateur (Connor O’Dell) who has had plenty of experience playing Chilliwack GC as the home course to the University of Fraser Valley Golf Team.  O’Dell fired up a lovely score of 66 coupled with his even par 72 on day one to end up stealing Low Gross honors from Mr. Grittner by one shot!  Mission’s Colin Gilliam also gave O’Dell a run for his money, but stumbled coming home with bogeys on 17 and 18 to fall to a 3rd place finish overall in the Amateur Championship.  All was not lost for Grittner, as he managed to clean up on the Overall Low Net Title, with a 2-day net total of 131 (-13).  Not bad for a 4 handiap!

It was O’Dell’s 2nd Amateur victory at Chilliwack Golf Club in 2 months as he also took Low Amateur honors at the 36-hole VGT Chilliwack Major in May where he also shot a great final round of 65 on the final day to top all pros but one (Adam Cornelson) as well!

The 2014 Chilliwack Open had its share of drama on day 2 where some Professionals came within striking distance on the front nine, but eventually Parry pulled away from the crowd hitting some spectacular shots.  Overall his play was just too steady, and his consistent play lead to a round of 70 (-2) to take the title by 3 shots over Vancouver Golf Club’s Matt Makinson.  Parry pocketed $2,000 cash for his 6th Chilliwack Open victory while Makinson earned $1,400 for 2nd place.

The Chilliwack Golf Club should be commended for the amazing job they did in operating a first class Open Championship for the 55th consecutive year!  Special thanks to Bryan Ewart (GM), Jared Rempel, Director of Golf Operations and your whole team who have gone above and beyond to make this event one of the most well run and most fun golf tournaments in British Columbia!  The changes to the golf course, including the new starting hole (original #6) and the addition of the new tee deck on hole #13 (now a par 5) were very extremely well received by the players this year!  The course conditions were by first class and by far the best they have been for many years, so a huge congrats to Head Superintendent Duane Grosart and his team for their efforts making this happen!

Special thanks to all Chilliwack Golf Course volunteers and the whole VGT Team who make the Live Leaderboards so much fun for the fans to see throughout the whole weekend!  Those ½ days are really paying off!

It’s not a surprise that the Chilliwack Golf Club was recognized by the PGA of BC as 2013 Golf Facility of the Year!  We are proud to have the Chilliwack Golf Club on the VGT schedule as an Official Order of Merit event and I can speak from the many positive comments from our members, that they really appreciate all the hard work that goes into the execution of the event for them to enjoy the weekend so much!

From all of us at the Vancouver Golf Tour, we look forward to another first class event with Chilliwack Golf Club in 2015!

For Full List of Professional and Amateur Results and who hit the prize table: http://www.chilliwackgolf.com/Tournaments-Events/Chilliwack-Open-(1).aspx