North Vancouver’s Hunter Phelan took away a lesson he will never forget from this Sunday’s VGT event at Peace Portal.  After an opening birdie on the short 1st par 5, Hunter’s day looked to be coasting along pretty nicely.  But after a costly 5-putt on the 2nd hole for triple bogey, a quick double bogey to follow on hole 3, and yet another bogey on the par 3 – 4th, the rounds complexion had taken a 180 degree turn.  Now for most golfers this would make for a very long day and give even the best players a sore stomach and want to pack-it-in.  But not the calm and collected 17 year-old who has obviously learned a few things from his coach Rob Holding.

Hunter would collect himself and make a nice par on the toughest hole on the course on #5 to right the ship.  And with continued patience, Hunter would find birdies on 8 and another on 11.  A sloppy bogey on 12 was only a stumble, as he would birdie right after on 13 to get his round back on track.  Some very solid golf on the way in with the pin positions in some diabolical positions left Hunter at +3 (75) on the day.  Typically this would not get the job done in the Championship Flight, and nor did Hunter think he had come tied for the lead.  But he had done what it took to get into a playoff with Langley’s Jeff Sheldon, who had come in at the same score earlier in the day.

With Jeff a bit rusty from sitting and Hunter fresh off his back 9, the momentum was in his court and he would hit 2 fantastic shots on the 1st hole and give himself a chance for eagle.  Jeff was up on the green in 3 and would have a medium length try for birdie, but would burn the lip and tap in for par.  Hunter then had an opportunity to seal the win with a 2-putt, and he would do just that! 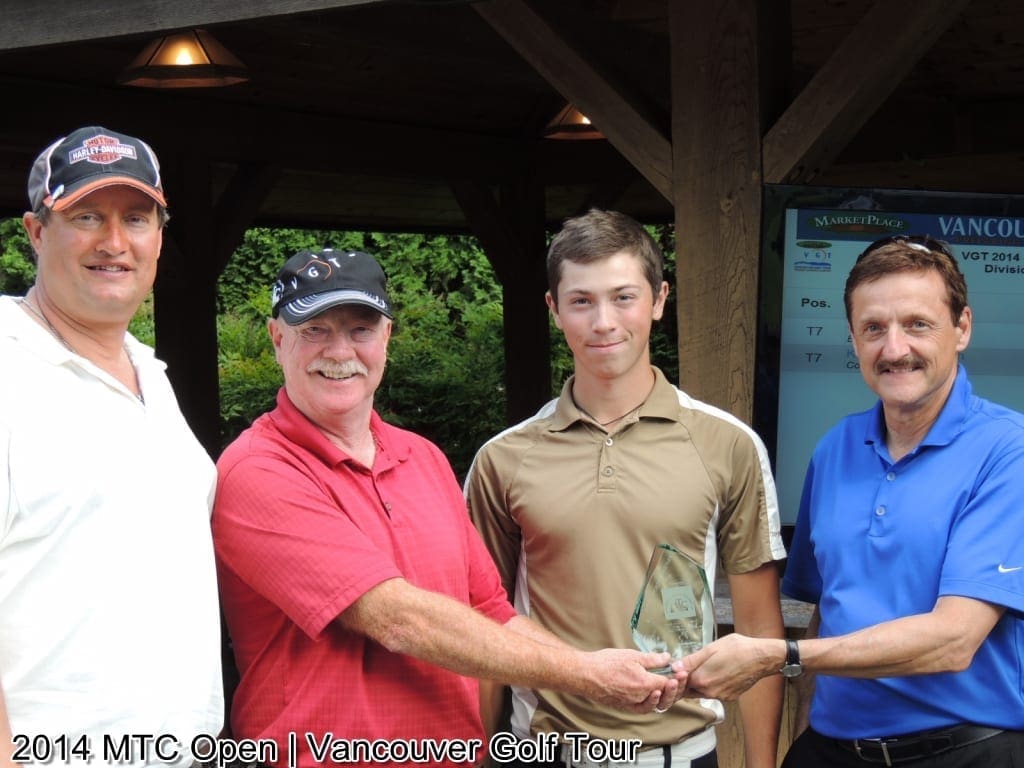 This was Hunter’s first ever VGT event, and not a bad way to start his career on the VGT with a victory!  Thanks to the sponsors of the event, Murchison, Thomson & Clarke Lawyers, Hunter won a sleek push cart from BIG MAX, and a trendy pair of FENIX GOLF trousers!  Jeff would take home 2nd prize which was a pair of NIKE golf shoes!

In Flight A action, Raymond Kapoor took home Low Gross Honors with a score of 79 while Brad Heath earned Low Net honors with a score of 69.  Raymond would also take home a BIG MAX pushcart and pair of FENIX GOLF trousers (over $300 value) while Brad won a 2-some of golf to the VERRADO GOLF CLUB in Phoenix, Arizona ($250 value).

In the largest flight of the event, Flight B Gross Score went to Burnaby’s Taylor Johnson while Low Net prize was won by Sonic Transport’s Les Calder (68).  With the flight being much bigger, Taylor earned himself a cool BUSHNELL V3 JOLT Rangefinder ($400 value) while Les took home a 2-some of golf down at VERRADO GOLF CLUB in Phoenix, Arizona ($250 value).

Our special thanks once again go out to MURCHISON, THOMSON & CLARKE LAWYERS who have continued to support local golf on the VGT the last 6 years and are giving players an opportunity to hone their games and improve locally no matter what level of golf they are at.  So many young golfers are getting the opportunity to learn how to improve and become Champions on the VGT, which goes a very long way when they hit the next stage of their golf careers out on the PGA TOUR Canada, WEB.COM and PGA TOUR!  We can’t thank you enough!

Continued thanks to the VGT Team for all their continued support and efforts throughout the season and in particular at this event!

Final thank-you’s to the Peace Portal Golf Course and their management team for welcoming the VGT for the 2nd straight year!  The golf course was in beautiful shape and I know the players found the golf course to be a great test.  As difficult as the pin positions were, the greens rolling smoothly all day!  We look forward to hosting many events with your beautiful tree-lined layout in the future!