On an off-and-on rainy day at Hazelmere, some of BC’s top Pros rose to the occasion in front of their amateur playing partners in the 5th Annual WCGG Invitational Pro-Am.  This year’s field was reduced to a total of 18 Pros and to start the day, Pros’ entry fees were not only waived for the day, but each Pro was greeted with a nice $300 appearance fee courtesy of WCGG President Mike Stuart!  Players then played for top 4 spots on the day, for a total of $5,500 and another $2,500 in a skins game and Pro KP that would undoubtedly pay handsomely for those winners!

Players were welcomed with some of the friendliest staff members in the business.  Thanks Mike White, Graham Ogden and Aaron Varlow for your continuing to elevate the game when it comes to golf hospitality!!  The Hazelmere Golf Course was in pristine condition on the day thanks to Hazelmere Superintendent James Muter, Regional Superintendent Joe Veller and their team.  And from the first tee-shot all players continued to receive the red carpet treatment from the Hazelmere Team, from the complimentary on-course cart beverage service to one of the finest meals you’ll experience in a Pro-Am thanks to Executive Chef Andrew Wynnyk and his team! 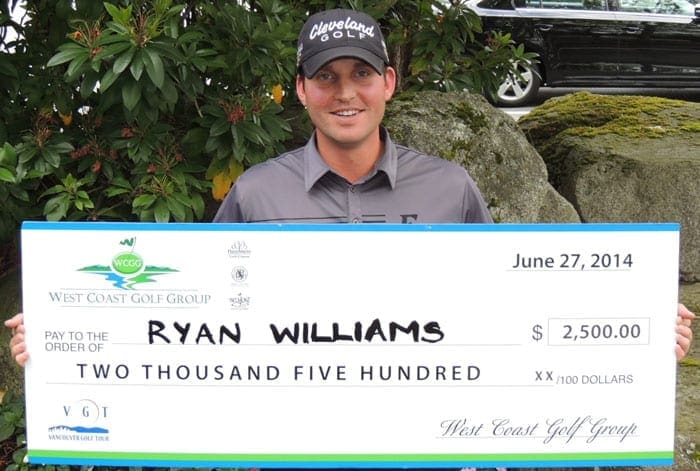 At the end of the day a familiar name this year came out on top in the Pro tournament.  PGA TOUR Canada’s Ryan Williams (Vancouver, BC) fired an exceptional score of 67 in the rainy conditions, good for top spot and a tidy $2,500 winner’s cheque!  Williams (who represents Hazelmere Golf Course) has been VGT’s hottest player on their circuit in the months of May and June, making his mark on the VGT Majors Circuit over many top Canadian and International Pros.  For winning the VGT Majors Series Williams was awarded a MAJORS BONUS valued nearly $3,000 which included a $2,000 CASH prize and a $950 FREE ENTRY to the GREAT LAKES / NGA TOUR’s Southern Ontario Open.  All totaled this year, RW has pocketed a cool little $16,500 in earnings since end of March on the VGT.  Add another $7,500 from his 4th place finish on PGA TOUR Canada in Ft. McMurray and RW is fast on his way to having his best year out on tour.

Ryan is back out on PGA TOUR Canada this week in Saskatoon where he will undoubtedly continue his great play in search a top 5 placing on the money title at the end of the year and a spot on the WEB.COM Tour.  Ryan has also advanced to final stage of RBC Canadian Open qualifying on Monday, July 21st with fellow VGT Pros Adam Cornelson and Kevin Stinson.  Good luck pros!

And speaking of Cornelson and Stinson, both VGT Pros played some awesome golf themselves at the Pro-am, shooting rounds of 68 (-4) and tying for 2nd place in the tournament.  Each player earned $1,250/each for their efforts on top of their $300 appearance fee.  Looks like all 3 of their games are rounding into form heading into this week’s PGA TOUR Canada event in Saskatchewan as well as the final qualifying for RBC Canadian Open!  Continued success to all three!

There were a total of 4 skins won on the day, each valued $500, they went to the following players:

Finally, Adam Cornelson continued to pile up the cash into his pocket with another $500 swing as he knocked in a long iron shot close on the par 3, 6th Pro KP hole sponsored James Dams of DAMS LINCOLN / FORD.

All totaled, WCGG sponsored the event to the tune of well over $25,000 in cash and prizes including over $13,500 in prize money thanks to the valued partners of the West Coast Golf Group (see below).  This does not go un-noticed in our industry and is a true testament to the support that Mike Stuart and the West Coast Golf Group continue to give back to local BC golf development year-in-year-out.  VGT was honored to be a part of this event for the 5th straight year!

On the Pro-Am end of the tournament, Amateur golfers were not only privy to some of BC’s rising stars on their way to the WEB.COM, but they were welcomed with some premier tee-gifts and prizing on the day.  The winning team just so happened to be the powerhouse Team of Phil Jonas (Pro), Dan Dodman, Mike Stuart & Jay Janower.  Well done gentlemen!!

With the focus of the day being on FUN, a majority of the premier prizes were drawn, those including Samsung Tablets, CLEVELAND GOLF Iron sets, CLEVELAND Classic Drivers, Spa packages & Foursomes of golf at WCGG Properties and a membership to the 3 WCGG Properties (Hazelmere, Swaneset Bay Resort & Belmont).  The grand prize draw winner of a full-year membership to all 3 WCGG Properties (est. $5,000 value) went to 7 year loyal VGT sponsor (& member) Dave Ebner!  Congrats Dave.  That is Karma in a nutshell!!

On that note, VGT would like to pay tribute to each and every partner of the West Coast Golf Group that continue to make this event very special for the local pros in attendance and who also continue to service the 3 great WCGG properties and allow them to operate as 3 of BC’s premier golf facilities:

We look forward to partnering with the West Coast Golf Group on many future VGT events and in particular the 2015 WCGG Invitational Pro-AM!