A 15 year veteran of the PGA TOUR Canada, Richmond, BC’s Matt Daniel has been a bit off the radar, (at least on the VGT) since he failed to keep his card on the PGA TOUR Canada last fall.  When the newly governed Canadian Tour cut down the number of Exempt cards kept from 60 to 80, and removed privileges of all Veteran status Pros, Daniel was one of those who were affected at the end of the season.  But so far on the VGT Spring schedule, you wouldn’t have known Daniel took the winter off from tournament golf.  So far Daniel has carded rounds of 68 at the Brad Garside Open for T3rd place at Pagoda Ridge and was a winner this week at the VGT Mission Golf Classic where he shot a fantastic round of 65.  Daniel carded 5 birdies and an eagle on the tree-lined Mission layout which was good for a $1,000 first place cheque and a one shot win over West Van’s Seann Harlingten.  Daniel’s win vaulted him back into the top 5 of the CLEVELAND/SRIXON ORDER OF MERIT thru 4 events and with Harlingten’s runner-up placing he shot up into 1st place in the season-long VGT Order of Merit with 3,362 points, just ahead of Pacific Coast Golf Academy’s Chris Lee (3,000 pts) and Chilliwack Golf Club’s Brad Clapp (2,800 pts). 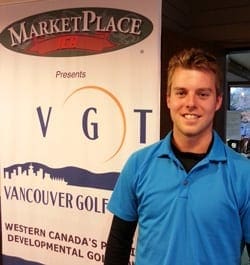 In the Apprentice Tour Division, Hazelmere Golf Club’s Callum Robinson topped a small field, but in style.  The 21 year old Professional carded a fine round of 68 (-3) and pocketed $420 for the win.  This was Robinson’s first Professional win, and small field or not, his round of 68 should give him some added confidence to keep advancing his game to as high a level as he can.

In our Amateur Competition it was last week’s runner-up Rob Arthur who prevailed, carding an impressive round of 3-under par 68 for a 3-shot victory over Ryan Hunt of Meadow Gardens GC and 4 shots clear of Mission local Jim Shaw and UBC Women’s #1 ranked player Kylie Barros.  Arthur collected a FENIX GOLF prize pack (trousers, belt, polo shirt) plus a $50 VGT Credit.

Arthur has been really playing some steady golf as of late, both in the final few Winter Tour events as well as in the first 3 Spring/Summer VGT events (T3, 4th, 2nd).  He not only sits atop the CLEVELAND/SRIXON ORDER OF MERIT but he has a tidy 70.75 scoring average to back it up, but he has qualified through to Sunday’s finals of the Canada Bread BC Match Play Finals with partner Dan Swanson.

Arthur is followed closely on the Order of Merit by two young golfers, Connor O’Dell (Pitt Meadows GC) who has had a T1st, T2nd and 4th place to his name, and last week’s winner Kaleb Fisher (Chilliwack Golf Club).  No doubt it will be a heated race to the top of the Order of Merit this year from all 3 of these players and a pack of talented amateurs on their heels.

The Flight A Competition was a walk-away win by youngster Noah Lee who carded a net 65 on the day, five shots clear of Swan-e-set’s Moez Noorani.  For the second week in a row, Abbotsford’s Kevin McKee finished at the top of Flight B with a net score of 73.  Both players took home some nice prizing.  Noah with a FENIX GOLF apparel package (trousers, polo shirt, belt) and McKee with a Cleveland 588 RTX wedge, hat and glove.

With VGT’s next Professional event being the 36-Hole MAJORS SERIES event at CHILLIWACK GOLF CLUB.  This will pose as the final VGT event to decide who gets an exemption into the newly created PC FINANCIAL OPEN at Point Grey Golf & Country Club (May 27-June 1st).  The VGT Professional with the most cumulative points after the first 5 VGT events this spring (not already exempt) will be given a sponsor’s exemption to play this PGA TOUR Canada event!

“The 36-Hole Majors Series events hold a much higher point value so it is really anyone’s spot right now” stated VGT Commissioner Fraser Mulholland.  “It is just great for us to be offered an exemption like this and I can’t thank the Tournament Director (Kelly Dixon of SDI Marketing) enough for extending this opportunity to one of our marquee VGT players.  It will really make our first MAJORS SERIES event at Chilliwack Golf Club that much more exciting with the PC FINANCIAL OPEN spot up for grabs”!