Vancouver Club’s Adam Cornelson continued to prove to everyone around him that he’s ready to make 2014 a great year. After a successful campaign on the VGT Winter Series (four wins in 8 events; 67.4 stroke average),Cornelson showed everyone his game was rounding into form this year.

After missing the Brad Garside Open (VGT Opener) on Mar.24th (from heading south to Louisiana to qualify for the Web.com event), Cornelson quickly jumped back into action last Friday, stalking his way around the Abbotsford layout en-route to a 4-under par 66. His round included 6 birdies and a couple of bogeys on some extremely challenging pin placements on the day, and was good enough for a one shot victory over Richmond  Teaching Pro Chris Lee, who missed a 4 footer for birdie on 18 to tie.

Cornelson took home a cheque for $1,000 and leapt into 3rd place on the CLEVELAND/SRIXON ORDER OF MERIT with 1,500 points, 750 pts. behind opening event winner Brad Clapp (2,250 pts) and 2nd place Lee (1,900 pts.) Both Clapp and Lee have had some nice starts to the year themselves, Clapp with a win and a t3rd at Ledgeview and Lee with a t3rd at the Garside Open and runner-up at Ledgeview. Stroke averages for all 3 players are at 67.5 or better, which has been moving lower and lower each year on the VGT and a sign of just how great BC Golfers are playing. 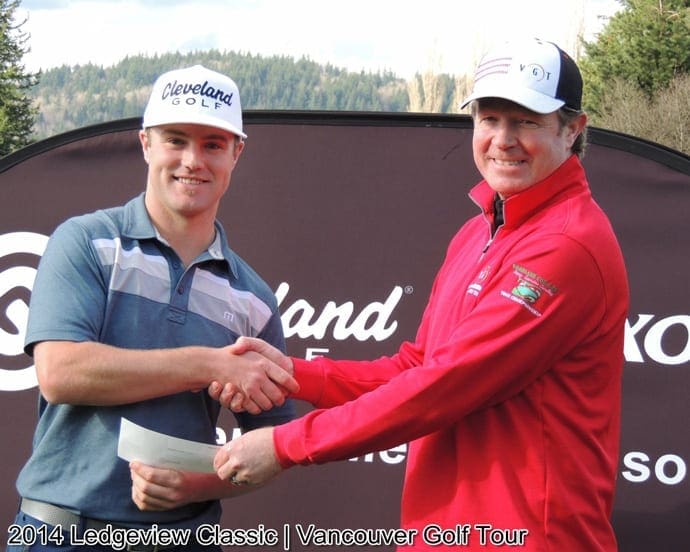 Both Clapp and Cornelson will make their way over to Crown Isle Golf Resort in Comox, BC where they are entered for PGA TOUR Canada Q-School on May 6-9th. Cornelson will be looking to earn his full status back on PGA Tour Canada after missing the top 60 mark by a couple thousand dollars on the PTC in 2013. Clapp will be making his 2nd appearance at the Q-school after he narrowly missing out on his first crack at it in 2013.

In the Apprentice Pro Division, Morgan Creek Assistant Professional Jeff Lindemulder took home top honors and a cheque for $360 with a score of 72, while Seymour Creek’s Larry Park won his 2nd consecutive cheque in the Apprentice Division shooting 77 and making $150. Lindemulder and Park are neck-and-neck for top Apprentice after 2 events. Top Apprentice at the end of the year will win a $500 Bonus Award courtesy of VGT!

VGT had a huge turn-out of Championship Amateurs in attendance at Ledgeview, and the scoring by these guys was remarkably similar to the top Pros in the field, which was really exciting to see. After 18 holes of play, local Dean Reddicopp and 15 year old junior golfer Roy Kang went down the 1st hole in a sudden-death playoff after carding scores of 69 on the day. And it appeared that the local knowledge paid off as Reddicopp was declared Champion after the first hole. Both Kang and Reddicopp collected some great swag thanks to VGT’s Order of Merit Sponsor CLEVELAND GOLF & SRIXON CANADA. A trio of golfers were only one shot back at even par, including Pitt Meadows’ Connor O’Dell, Guildford’s Rob Arthur and Simon Blaker of Langley, BC, all winning some great CLEVELAND/SRIXON product!

In the remaining field of play, Flight A Event was taken down by Rob Williams of University Golf Club with a score of 76 over Moez Noorani, Scott Ross and Mike Compton, all with scores of 77. Flight A Net winner went to Swan-e-set’s Moez Noorani with a Net score of 67. Flight B was won by SPGA member Peter Jones with a Gross Score 82 while Robert Parihar was the Low Net winner in Flight B with a score of 70.