For the 2nd straight year Brad Clapp tied for the top at VGT’s Opening event, the BRAD GARSIDE OPEN.  Last year Clapp was out-lasted by Mission’s Kevin Stinson on the 2nd playoff hole after they both carded rounds of 66 at Morgan Creek Golf Course.  This year, at the end of regulation play, 6-time VGT Order of Merit Winner Bryn Parry was tied at the top with the Chilliwack Golf Club Teaching Pro as both players came in with scores of 67 (-5) on the 6,900 yard Pagoda Ridge Golf Course in Langley.

With his coaching career taking first priority on this day, the 41 year old Parry, being obligated to his clients   was unable to attend the playoff.  So by the VGT policies in place, with Parry not being present for the playoff, Clapp was declared the 2014 Brad Garside Open Champion.  Clapp’s victory took him to the top of the CLEVELAND/SRIXON Order of Merit with 1,500 points and a $1,200 first place cheque. 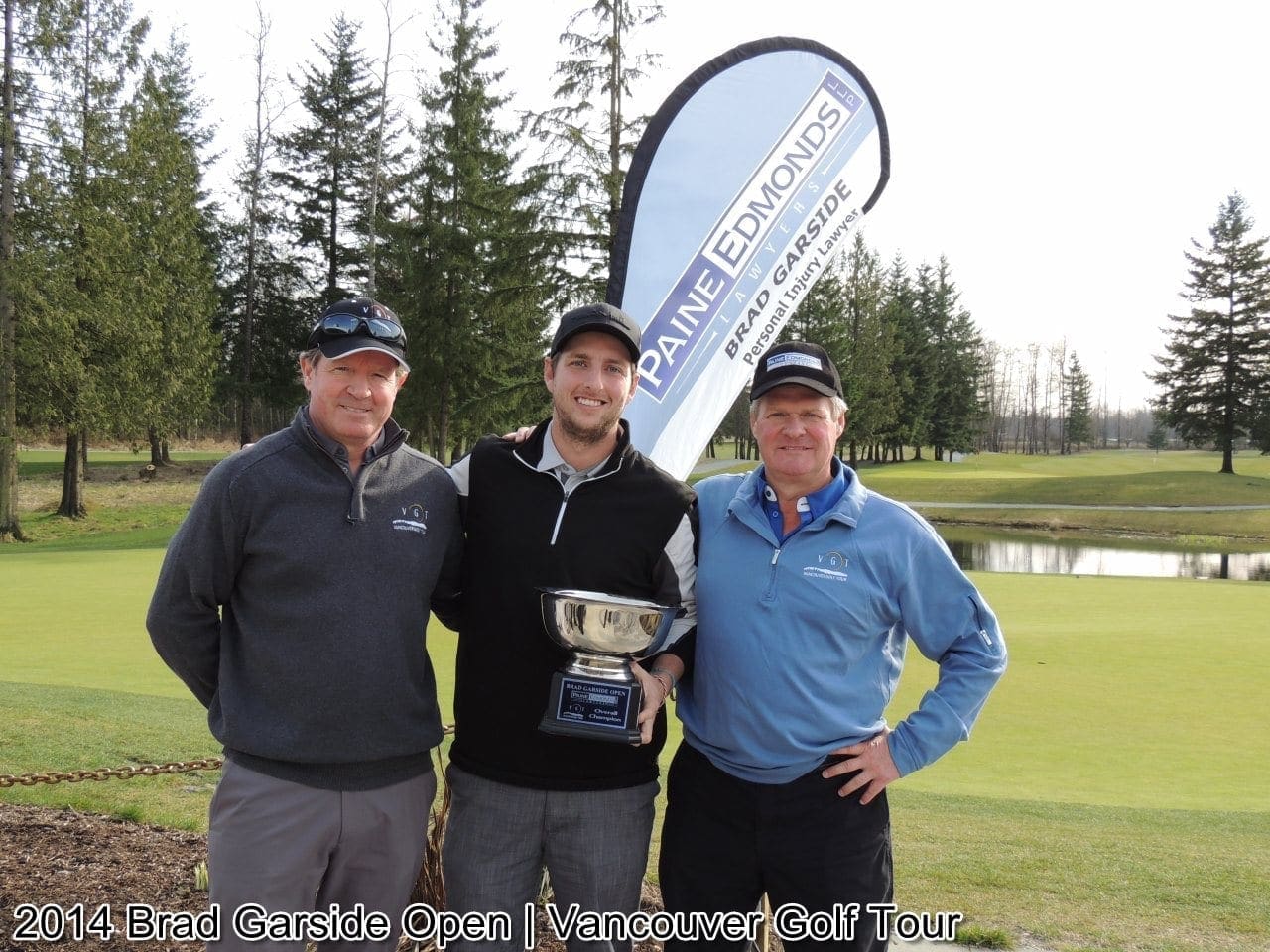 Clapp has taken some time this winter to take some time away from the game, which he says has allowed him to re-charge his batteries for the 2014 season.  He has dedicated himself to a new fitness regime and it appears it is really paying off.  He will use the VGT as a warm-up for his 2nd attempt at qualifying for the PGA TOUR Canada this May.  Both Clapp and Parry will compete heavily on the VGT this year, particularly in the 2nd season of the VGT MAJOR SERIES launching May 1,2nd at Chilliwack Golf Club.

In the newly formed Apprentice Professional Division, Morgan Creek’s Jesse Singh took the title and $600 first place cheque with a score of 71.  Hazelmere’s Don Soel finished one back with a round of 72.

While 31 of BC’s top Professionals were battling out for the first place cheque, there was just as great showdown happening in the Amateur field.  At the end of the 18 hole championship, Pitt Meadows’ Connor O’Dell and Kaleb Fisher fired even par rounds of 72 and would battle it out over 5 playoff holes to decide the Overall Amateur Champion.  O’Dell would take the title on the 5th playoff hole and capture 1st place price of a CLEVELAND 588 Custom Driver as well as 1500 points to lead the season-long CLEVELAND/SRIXON Order of Merit race!

Fisher has been playing some great golf of late, just recently capping off the winter season winning the VGT Winter Tour Order of Merit over 13 events!  At only 18 years of age, he’s making some great progress playing amongst some of BC’s top Professionals.

It was good to see some of Canada’s youngest up-and-coming Juniors in the mix, both 15 year old Roy Kang, and our youngest competitor in the field Jae Wook Lee.  Kang finished a respectable t7th place and Lee finished just one shot out of the playoff with a score of 73.  This is exactly the kind of experience that VGT is looking to provide for young junior and amateur golfers.  Congratulations guys!

In VGT’s Flight A and B Divisions, The Low Gross and Net winners were as follows:

Special thanks are extended to one of VGT’s most loyal sponsors, Brad Garside of Paine Edmonds Lawyers for his extreme generosity, allowing our Professionals to play for a total purse of over $6,000 cash and for the Amateurs to play for over $4,000 in prizes!  Our continued thanks to all our partner sponsors and host course this week, Pagoda Ridge, who have been one of the most supportive golf courses to work with the past 3 years!  We look forward to executing many more events at your beautiful test of golf, particularly at the BC Match Play Qualifying Mar.29,30th.