After an indifferent year on the PGA TOUR Canada this year due to a neck and back injury in the spring, VGT Pro Ryan Williams proved to himself and his peers this past month that he belongs out on tour.  Williams credits his recent successes (A runner-up finish on the PGA TOUR Canada and his win at the VGT Tour Championship) to two people:  His coach Phil Jonas, who from his own tour experience talked Williams through a tough stretch and gave him a much more positive state of mind heading into his 2nd place finish in Cape Breton.  And to Dr. Ron Warkman, a local Chiro specialist in Surrey who both Williams and Phil Jonas both credit for making them both “fit to perform” out on tour. 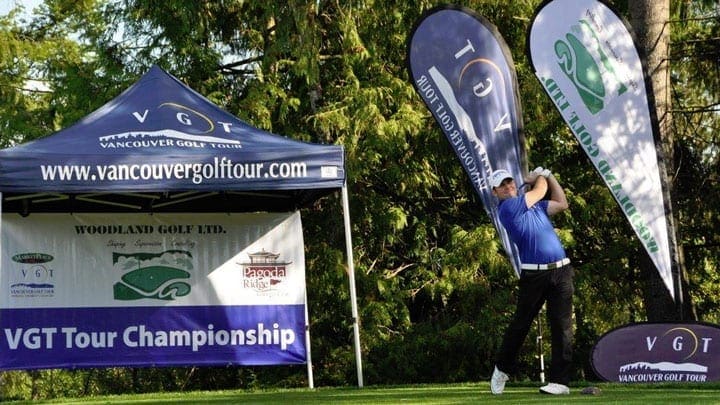 Williams’ Win was his 2nd this year and it pushed him into a 2nd place finish on the year-long CLEVELAND / SRIXON Order of Merit behind 6-time Order of Merit winner Bryn Parry.

It was last year’s Tour Championship winner Nathan Leonhardt who held the overnight lead at -6, one shot over Williams and 2 over Parry.  However, Williams outlasted everyone on a tough Pagoda Ridge set up on Sunday, carding a 2 under par 70 for a 2 day total of 7-under par and a one shot victory over North Van’s Bryn Parry.  Parry was the only one to make a move on Williams on the back nine after he had opened a 3 shot lead after 9 holes.  He would close to within a shot going down 18 after a great wedge shot to a guarded pin on 18, he stared down a 6 foot birdie putt on the final hole to pull square with Williams.

When Parry’s putt slid by the hole, the 31 year-old Ryan Wiliams was crowned 2013 WOODLAND GOLF VGT Tour Championship winner!  Williams pocketed $2,500 of the total $12,500 purse while Parry took home $1,600 himself.  Two shots back of Parry were a pair of PGA Tour Canada members Eugene Wong and Cory Renfrew, who will both be heading to WEB.COM Qualifying School this fall.

The VGT Tour Championship featured a total of 90 pros and amateurs including a number of BC’s top pros playing full-time on the PGA TOUR Canada.  Top amateur honors went to Vancouver’s Chris Moore with a 2 day total of 146 (74, 72), resulting in a 3 shot winner over Abbotsford’s Ryan Combs.  Moore was also recognized at the end of the evening with the Cleveland/Srixon Order of Merit title in the Championship Division.  Murray Reed and Gil Semet were victorious in winning the year end Flight A and B Order of Merit.  All three Amateurs were winners of a free flight to the VGT Desert Classic in Phoenix next March plus a $200 credit towards the tournament.  Overall Net Amateur honors went to Raj Singh of the South Pacific Golf Association.  Both Moore and Singh walked away with a set of Cleveland 588 irons for their victories!

For the 6th straight year Seymour Creek’s Bryn Parry took down the VGT Pro Order of Merit Title sponsored by Cleveland Golf / Srixon Canada. For his impressive play, Bryn was awarded a $2, 500 Q-school Bonus prize.  But with work and family obligations getting in the way, he declined the award.  As a rule, the $2, 500 Q-School Bonus would be awarded to next VGT Pro on the order of merit who had registered for any major Q School, which meant the award went to Abbotsford’s Nick Taylor.

Taylor was unable to attend the VGT event as he was Monday qualifying for the opening event on the PGA Tour schedule, the  FRYS.COM.   He will stay down south to Monday qualify for a couple of PGA Tour events and get his prep work for Q-School in Phoenix with a few other VGT pros including Renfrew & alumni Adam Hadwin.  Taylor is exempt through to the final stage of WEB.COM Q-School by virtue of his 7th place finish on the PGA TOUR CANADA this year.  Taylor had another outstanding year on the VGT, particularly in our 6 MAJORS this spring,  winning 3 of the 6 events (in a row) with three 2nd place finishes and a stroke average of 66.2.  He would follow-up his success in the spring on the VGT with a total of five top 10 finishes on the PGA TOUR Canada, none worse than a 7th place finish!  We wish Nick and all the VGT Professionals heading to WEB.COM Q-School this fall every bit of success!!!  To chart our VGT Pros progress, please click here: http://pgatq.bluegolf.com/bluegolf/pgatq13/schedule/index.htm

VGT would like to personally thank entire BROWN family at Pagoda Ridge Golf Course for the wonderful reception and hospitality, allowing us to postpone our event after the storm last weekend and going the extra mile for all of our members this weekend!!  Hats off to Head Superintendent Reed Groshart and his team for managing to put Pagoda Ridge in absolutely fabulous tournament shape this weekend.  The fact that we could play summer rules today and putt on such silky greens is a true testament to the craftmanship of our title sponsor WOODLAND GOLF, designers, shapers and construction specialists of the golf course!  No wonder you have become BC’s hottest New Golf Course in 2014!!

We look forward to our return on Oct.20th, site of the FRASER CUP, our Ryder Cup style event versus the Chilliwack Golf League!  Thank-you for everything you do to help us develop BC Golfers on the Vancouver Golf Tour.  As you can read from so many of the Pros and Amateurs on Twitter and Facebook, you are allowing us to truly make a difference to the BC Golf scene!  Thanks for being one of VGT’s biggest supporters!