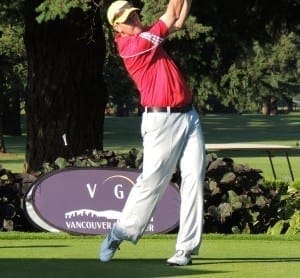 Parry, a veteran on the Vancouver Golf Tour and former Web.com Tour player, is coming off an impressive win at the PGA of Canada Championship at Magna Golf Club in Aurora, Ontario last week and continues his impressive play by tying the competitive course record set by Kyle German in 2008. Parry surrendered a single bogey on the par-four fourth hole before going on an impressive streak of 8 birdies and 6 pars to close out the round under perfect playing conditions at the Chilliwack Golf Club.

“I really wanted to rededicate myself to the game over the past eight months realizing that I needed to improve my conditioning to be able to compete with players such as Brad and Adam who are hitting it so far these days” said Parry.

PGA Tour and Web.Com Tour professional Adam Hadwin posts a two-under-par 69 (-2) and sits alone in ninth place. “I had it going at times today, but a couple three putts and a bogey on the last hole means that tomorrow I’m going to need to go real low to have any chance of catching these guys” said Hadwin.

Round one leader’s will tee it up in the final group starting at 2:00 PM on Sunday at Chilliwack Golf Club where 44 professionals and 180 amateurs are enjoying Chilliwack hospitality at its best. The 15th  hole beer garden and barbecue continue to be the preferred location for golf fans to take in the action. Attendance for the two day tournament was very strong for round one and promises to be even busier on Sunday as the final groups start teeing it up.

“Chilliwack golf fans are in for an exciting Sunday finish in the final round of the 2013 Chilliwack Open” said Chilliwack Golf Club’s General Manager, Bryan Ewart. “The course is in perfect mid-season condition thanks to the hard working greens and grounds maintenance crew and feedback from the players has been overwhelmingly positive.”

At time of writing, on the amateur side of the tournament, Chilliwack’s Dean Meyer leads the field at -1 through 9 holes with fellow Chilliwack golfer just 2 shots back at +1 through 18 holes.

“It’s great to see local professionals rise to the challenge with a Web.Com Tour player in the field and to have a course record being shot and two sixty-fours shows just how strong B.C. pro’s are” said Mulholland. “The enthusiasm of the local golf fans in Chilliwack has been terrific as they have been coming out in numbers to watch competitive players such as Hadwin, Clapp and Parry, some of Canada’s best golfers.”

Chilliwack Golf Club is a prominent facility in the British Columbia area and recently hosted the BC Senior Women’s Championship and the PGA of BC Assistants Championship. As one of the longest standing tournaments hosted by Chilliwack Golf Club, and part of the Vancouver Golf Tour, the Chilliwack Men’s Open includes the 15 th  Hole Grandstand, Sleeman’s Beer Garden and BBQ for fans.

About Vancouver Golf Tour
Since 2006 VGT has been giving BC’s local Professionals and Amateurs the opportunity for a high level of competition in a PGA Tour environment.  VGT’s goal has always been to provide local players the opportunity to learn how to win and build their confidence to play on Worldwide Major Tours.  The mission statement of VGT is to ‘Prepare Tomorrow’s Champions’. In 2012, a record 12 VGT Professionals competed at the PGA Tour Q-School!!