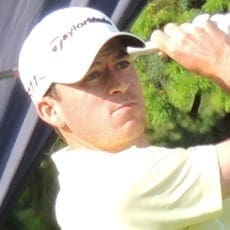 Winning the last 2 MAJOR SERIES EVENTS certainly put a target on Nick Taylor’s back this week at VGT’s 4th MAJOR of 2013 at the Chilliwack Golf Club.  Through 18 holes, Taylor had yet again separated himself from the field with another low round of golf, shooting 64 (-7) on a track he’s very familiar with (growing up in Abbotsford and playing out of Ledgeview Golf & Country Club).

Through 9 holes of the final round, Taylor had extended his lead over Bryn Parry from one to 3 shots, as he fired 3-under par 34 on the opening nine.  However, the line-up of Pros was piling up behind him at -7, including Chilliwack’s own Assistant Pro Brad Clapp, who had fired an opening nine of 33 (4-under) himself.  And two holes later, Clapp had closed the gap down to one shot with birdies on 10 and 11.  And after yet another birdie on 13, Clapp had caught Taylor at -10 for the event and he was now at -7 for the final round.

While Clapp was chasing Taylor, Taylor was playing sure and steady golf, but wasn’t making the same birdie run as his chasers that included Surrey’s Clark MacPherson who was 2 groups ahead playing with Clapp.  MacPherson also had a great opening 9 score of 33 to get to -7 tied with Clapp.  But a bogey on 12 delayed his chase momentarily until he came on strong with a string of 3-birdies-in-a-row on 13 to 15 to move him within one of Taylor and Clapp.

Macpherson would add one more birdie on #17 to get to -10 and one shot behind Taylor and now tied with Clapp for 2nd place.  After an up-and-down save on 18, this is where he would finish.

Meanwhile in his group, Clapp was continuing to surge, birdying hole 15 to go -8 for the day and -11 for the tournament, taking the lead away from Taylor momentarily.  But when Clapp bogeyed the difficult 16th, Taylor was birdying the short 15th and Clapp’s lead was no more.  Taylor had re-gained a one shot lead over Clapp and Macpherson with 3 holes to play.

Taylor’s short game saved him when he needed it the most, securing pars on 16 and 17 when he left himself in tough spots from the left side of the rough on 16 and a lengthy 2-putt on 17.  And once Clapp and Macpherson had tapped in for pars on 18 and posted at 10-under par, Taylor would need only one more par for the win.

Taylor would create a bit of drama for the gallery, pushing his drive behind a tree, forcing him to punch 40 yards short of the green on his 2nd.  From there, Taylor relied on his rock solid short game to polish off a round of 67 (-4) and a 36-hole total of -11, good for a one shot victory and his 3rd straight Major on the VGT!

Taylor’s win earned him a cheque for $2,300 and more importantly solidified his top position in the VGT MAJORS Order of Merit through 4 Majors events.  He sits at 18,000 points and over 7,000 points ahead of his next challenger Darren Wallace with 2 events to decide the Majors Order of Merit Champion.  The Majors Champion will collect A BONUS cheque of approximately $3,500 (based on #players per Major event).

Runner’s-up Brad Clapp and Clark MacPherson both won cheques for $1,350 while one more shot back at -9 was PGA TOUR Canada’s Cory Renfrew who collected $1,100 for his 4th place finish.  North Van’s Bryn Parry was also charging late in final round action before a bogey on 17 dropped him back to -8 and in 5th place for the tournament.

Chilliwack Golf Club sported a total of six local Professionals playing in the event, including winner Nick Taylor.  Four of the six pros finished in the top 15, showing just how strong the Tour Pro presence is at Chilliwack.

Pros were treated to some ideal course conditions thanks to Dwayne Grossart, Head Superintendent.  Fairways and greens were in superb shape throughout the tournament, and although heavy rains hit between rounds 1 and 2, the golf course held its form and allowed players to finish the event when we thought at times there would be a suspension of play due to the heavy rainfall.

VGT’s 5th MAJOR comes to the WEST COAST GOLF GROUP’s Belmont, Hazelmere & Swaneset Golf Courses on May 29-31st.  The event will feature 60 of VGT’s and PGA TOUR Canada’s finest Professionals vying for $34,500 in prize money including a $7,500 first place cheque and a $2,000 skins game at the Pro-am on May 30th at Hazelmere.

VGT’s final MAJOR showdown comes at the SAPUTO VANCOUVER OPEN Presented by Johnston Meier Insurance and C N A on June 13-15th at Langara, McCleery and Fraserview.  VGT’s BIGGEST MAJOR of the year has a projected $100,000 Pro purse based on a full field of 156 Pros.