“TAYLOR TAKING HIS GAME TO THE NEXT LEVEL” 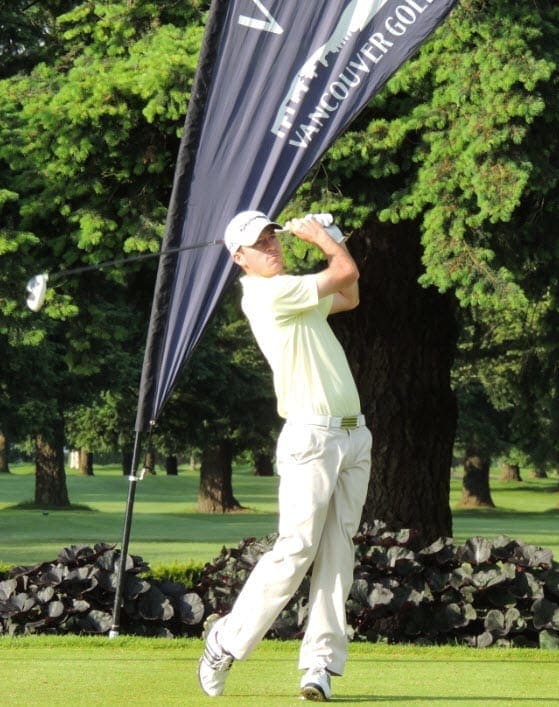 Closing out his last two events with final rounds of 63 apparently wasn’t enough for Abbotsford’s Nick Taylor, as he cruised to an opening round of 64 (-7) today at VGT’s 4th MAJOR of 2013 at the Chilliwack Golf Club.  The 25-year old PGA TOUR Canada Professional takes a one shot lead into tomorrow’s round over North Vancouver’s Bryn Parry, who has continued to improve on his play in each of the 4 VGT Majors (9th, t4th, 3rd).   But Taylor will be tough to beat if you look at his track record the last 3 VGT events, finishing T2, 1st and 1st with a cumulative score of 42-under par (-42).  YES, 42-UNDER PAR!

This, however won’t stop Parry and another dozen of Western Canada’s top Professionals who sit within striking distance heading into round two tomorrow at the course Taylor now calls home.

Taylor’s round today featured 9 birdies through 14 holes and a couple of bogeys including a 3-putt on 15 after his relatively short downhill birdie putt slipped 6 feet by the hole.  When asked about his game and what has led to his stroke average being so low (65.87), Taylor stressed that he feels everything in his game seems to be just a bit sharper and that particularly his putting has been in great form for the most part.  “And even when my putting hasn’t been going on all cylinders, my ball striking has been really good on those days making it a lot easier to score” stated Taylor.

Taylor’s goals for the year include winning the PGA TOUR Canada Order of Merit which would earn him full status on the WEB.COM thanks to the newly formed partnership with the PGA TOUR.

Taylor’s immediate goal is to earn a berth into the 2013 U.S. Open at Merion in mid-June.  He recently advanced through the local site in Bellingham Washington with a score of 68 (T3rd) and will make his attempt at Sectional Qualifying on June 3rd at Tumble Creek Golf Club in Cle Elum, Washington.  This would be Taylor’s 3rd time playing in the U.S. Open after qualifying for the event in 2008 and 2009 (where he made the cut and finished T36rd and Low Amateur).

But first priority for Taylor is to continue his good form tomorrow at VGT’s 4th MAJOR at Chilliwack where he looks to thrown a 3rd consecutive 63 at his colleagues in the final round for yet ANOTHER WIN.

For a review of Day one scores and for Final Round Live Scoring, please click https://vancouvergolftour.com/leaderboard.

For more information on the Vancouver Golf Tour: