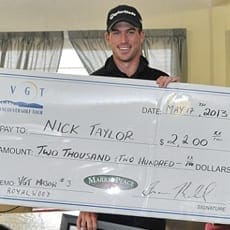 It took all of his final nine hole score of 29 to do it this week, but PGA TOUR Canada’s Nick Taylor did it again on the VGT, shooting a final round score of 63 to edge out Langley’s James Allenby by one shot.  Last week Taylor shot a course record 63 at Pitt Meadows Golf Club for a 36-hole total of 15 under par and 6 shot lead over Langley’s Darren Wallace.

In Taylor’s own words, “I had a stretch where I hit the ball great and made some key putts.  I went 6-under par for 5 holes on the back nine, after really just making some good pars when the wind really picked up on our front nine.  When the wind died down that’s when I started to make the most out of the day.  I had a great day out there with my playing partner (Cory Renfrew).  Both of us played really well (Renfrew shot 66 on the day) and I was happy to win for the second week in a row”.

Allenby had in his words a similar tournament as last week in Pitt Meadows.  “I hit the ball equally as good today as I did on day one (where he shot 64), but my putts just weren’t going in the hole, even although I hit a lot of really good putts.  It was nice to get a better result out of the same scenario I had last week.  And wow, hats off to Nick for doing it to us for the second straight week with another 63.  What a guy.”

Taylor’s Win put another $2,200 in his pocket (after $2,500 last week), and after 3 VGT Majors events he holds a significant lead in the VGT Majors Order of Merit with a T2nd finish and two first place finishes.  His cumulative total to par over the six rounds in Majors is an astounding 35-under par!  And this week alone he recorded 14 birdies and an eagle over 36 holes.  An especially nice come-from-behind win after his start on day one where he went bogey, birdie, triple bogey!

Through 3 VGT MAJORS Taylor has pocketed over $6,000 and looks in good shape for the MAJORS BONUS POOL which has accumulated over $1,600 and will likely reach over $3,500 after 6 events.  The bonus pool is based on # of Pros in the field each event and will be paid out to the VGT Majors Order of Merit Winner at the end of the Saputo Vancouver Open on June 15th!

North Vancouver’s Bryn Parry kept improving on his play this week with rounds of 68, 67 for a 3rd place finish and a cheque for $1,200.  He leap-frogged ahead of PGA TOUR Canada’s Ryan Williams into 3rd spot in the VGT MAJORS Order of Merit after Williams pulled out in the early morning of the final round due to back spasms. He was -2 after round one and in good position to gain valuable Order of Merit points.

PGA TOUR Canada’s Darren Wallace sits in 2nd place on the VGT MAJORS OOM with 9,100 points but still sits some 4,000 points behind Taylor.  Wallace has finished T2, 2nd and T5 in his 3 VGT MAJORS starts.  And through 27 holes at Royalwood Wallace looked like he was in contention for the Win.  But back-to-back bogeys on 10 and 11 really slowed down his charge.  He would rally with a late birdie on 17 to share in 5th spot and a cheque for $850.

Victoria’s Cory Renfrew closed his Royalwood Majors event with a score of 66 and a two-day total of 8-under par, good for solo 4th place and a $1,000 cheque.  Renfrew looks to continue his great play on the PGA TOUR Canada schedule this year after a giant rookie year in 2012 finishing in 3rd on the Money list.  He has had a very decent winter on the All American Tour where he capped off one event with a tidy score of 59.

Renfrew is exempt through to final stage of U.S. Open Qualifying on June 3rd where he will be joined by James Allenby, Nick Taylor and Darren Wallace after they finished 1,2,3 at Local Qualifying in Bellingham!

FLIGHT A & B VGT ROYALWOOD CLASSIC

Through 9 VGT events Murray Reed holds down the lead in the CLEVELAND / SRIXON Order of Merit for Flight A while Gil Semet has a secure lead in Flight B.

Flight A and B Players will get another chance to test themselves on the same Pro set-up at Chilliwack in their own event on Monday, May 20th.