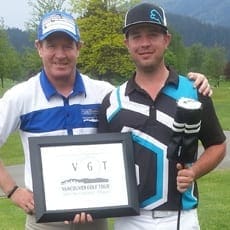 Surrey’s Joey Lemieux seems to be coming into his game in his late 20’s. After some decent finishes in the 2012 BC Mid Amateur (7th) and Canadian Mid Amateur (32nd) and five top 5 finishes on the VGT (including 2 runner-up finishes), Lemieux has found his stride on the VGT this spring.  First playing his way into the Quarter-finals of the Canada Bread BC Match Play with partner Derek Wray, then making his mark this Saturday with a sparkling round of 67 to capture his 2nd win on the VGT.  Lemieux’s last win came in 2010 at the VGT Sandpiper Classic.  Lemieux’s win this weekend brings him into the top 10 on the CLEVELAND/SRIXON Order of Merit through 6 events.  Lemeiux has only played in 2 events thus far, while Championship Order of Merit leader Yves Bisson, has played in all 6 events and holds a 500 point lead over Vancouver’s Chris Moore who finished t2nd this weekend.

Many of the Championship Amateurs have been gaining valuable experience in between Amateur only events in the VGT Majors Series’ events.  Amateur Order of Merit leader Bisson is one of those taking full advantage of this experience, shooting a 2-day total of -4 at Pitt Meadows up against some of Western Canada’s top Professional golfers.  Next stop on the VGT Majors Series is this Thursday/Friday at Royalwood followed by a quick turn-around at Chilliwack Golf Club on May 20,21st.

Flight A featured an ultimate showdown of two of VGT’s most improved golfers thus far in 2012.  Shane Jung and Wade Dickey carded superb rounds of 73 to share Low Gross in the A Flight.  And equally as superb was that both golfers played of the exact handicap factor of 6.6.  Jung prevailed in Golf Canada retrogression with the better back 9 score, taking the Low Gross Title and prize of a Cleveland Classic 3-wood + a $100 Marketplace IGA Gift Card.  Hickey took home the Low Net honors, good for a Cleveland 588 Wedge + $100 Marketplace IGA Gift Card.  Thru 8 events in Flight A, Murray Reed keeps his lead in the CLEVELAND/SRIXON Order of Merit with 6,416 points, 600 points ahead of Hickey and 1,100 ahead of Jung.  Reed has been a measure of consistency this year with a win, two 2nd place finishes and top 10’s in every event!

Flight B had another close battle between some of the top players in this flight.  But it was Jason Boyd who prevailed ahead of all others with a score of 80 gross (68 net).  Boyd has been bouncing back and forth between Flight A and B last few weeks, and although he has captured 3 titles on the VGT thus far (2 in B; 1 in A), he sits in 2nd place behind Flight B leader Gil Semet, who has been a ironman on the B Flight, playing all 8 events.  He has place in the top 10 every event but one this year and holds a healthy 1,400 point lead over Boyd and 2,000 point lead over his next chaser Robert Parihar.