RECORD SETTING “63” ON THE VGT 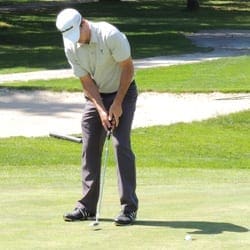 After an opening round of 66 and share of the lead, Abbotsford’s Nick Taylor continued to his exceptional play of late, executing his game to precision and in his very own words “Making some Putts out there”.  At the end of the day, Taylor had bested the current Pitt Meadows Golf Club course record (held by Bryn Parry, Riley Wheeldon and Darren Wallace) with a score of 63.  And equally as impressive was that he separated himself from one of VGT’s strongest fields of the year by 6 shots with at two-day total of 15-under par.  His course record score of 63 included 7 birdies and an eagle chip-in on #15.  The 25-year old Taylor’s performance earned him a $2,500 winner’s cheque and a bonus prize of a BIG MAX lightweight Golf Trolley worth $300.

The VGT Pitt Meadows Major marked VGT’s 2nd Major in as many weeks.  Thanks to his play, Taylor earned 5,000 valuable VGT MAJORS Order of Merit points to separate him from Langley’s Darren Wallace by 2,000 points, who finished in the runner-up spot two weeks straight.

Both Wallace and Taylor have had a great run of golf the past week.  Last week both players shot a two-round score of -9 at the VGT Sandpiper Major (only to be beaten by Ryan Williams in the playoff), then advanced through 1st stage of U.S. Open Qualifying in Bellingham with scores of 66 (Wallace) and 68 (Taylor).

Wallace’s two rounds of 71 and 64 at this Major put him in solo 2nd place, with his 2nd round 64 giving him a (temporary) share of the Pitt Meadows Golf Club course record.  An hour later, Taylor would trump Wallace’s 64 with an eagle on 15 and birdies on 16 and 18 to hit the record books.  Wallace’s 2nd place finish earned him a cheque for $1,700.  The top Professional after 6 events concluding at the SAPUTO Vancouver Open, will win an estimated $5,000 Bonus!

Co-leader after day one, Langley’s James Allenby had his troubles on the greens en route to a one-under par 71 and 7-under total, good for a five way tie for 4th place.  North Vancouver’s Eugene Wong finished solo 3rd place with scores of 67, 69 (-8) and good for a $1,300 cheque.  Due to his top 10 Money status on the ’12 Canadian Tour, Wong by-passed first stage and will join Taylor, Wallace and James Allenby down at Sectional (Final) US Open Qualifying on Monday, June 3rd.  All four players are expected to do their qualifying at Tumble Creek Golf Club in Washington State.

VGT’s second Major of the year featured some of Canada’s finest Professional Golfers vying for a $14,000 Total purse and $2,500 first place cheque.  The 36-hole Championship featured a 51 player field of Professionals and Elite Amateur Golfers.  Rosedale’s Yves Bisson was LOW AMATEUR in the field, firing back-to-back rounds of 70.

Our special thanks to the Pitt Meadows Golf Club for their wonderful hospitality and continued support of grass roots golf in hosting our 2nd Major of the year.  Head Professional and GM Neil Roberts and Mike Pierce are incredible hosts and make running a tournament at their club a really enjoyable experience.  To top off our event, players were treated to Tour-like conditions all week.  Thanks for your hard work and continued excellence Mr. Dave Zeiler, Head Superintendant of Pitt Meadows Golf Club.  You and your crew did another fantastic job of setting the course up in ideal conditions for our tour players!

For information on the Vancouver Golf Tour:

For information on the Pitt Meadows Golf Club: