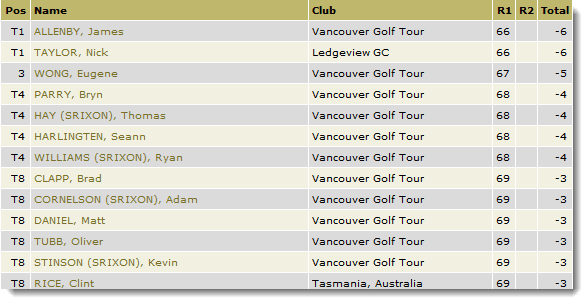 Yesterday, three of VGT’s top Professionals James Allenby, Darren Wallace and Nick Taylor secured the #1,2 and 3 spots yesterday at U.S. Open local qualifying at Bellingham Golf & Country Club.  All three players beat the odds on the day, taking 3 of the 7 spots available out of the 100 player field.   Langley’s James Allenby was the most impressive story, shooting an incredible score of 61 (-10) at the 100 year old golf course sight unseen.  Allenby’s score was 5 shots better than 2nd low qualifier Darren Wallace of Langley who last week lost in a playoff to Ryan Williams at VGT’s opening Major at Sandpiper Resort.  Taylor shot a 67, a very solid round good for a T3rd overall on the day.  He too made it into last weeks’ playoff against Williams and Wallace before being knocked out on the 1st playoff hole.  All three players advance to Sectional (Final) US Open Qualifying on Monday, June 3rd.  The closest site for all three players will be at Tumble Creek Golf Club in Washington State.

Less than 24 hours from finishing their rounds yesterday, Taylor and Allenby were on the course paired together, and after 18 holes of play, they share the lead with rounds of 66, one shot better than North Van’s Eugene Wong, who by virtue of his Order of Merit position on the PGA TOUR Canada in 2012, was exempt from US Open local qualifying.  Wong made major news last year by winning 3 consecutive Professional events, including the Vancouver Open, sandwiched by two PGA TOUR Canada events.

VGT’s second Major of 6 features some of Canada’s finest Professional Golfers.  Professionals are vying for a $14,000 Total purse and $2,500 first place cheque.  The 36-hole Championship features a 51 player field that includes last week’s Major winner Ryan Williams and Victoria’s Corey Renfrew who was a winner on the PGA TOUR Canada in his rookie year last year and earlier this year shot a 59 in an All American Tour event in Phoenix.

Williams and Renfrew shot rounds of 68 and 70 in what is a jam-packed leaderboard featuring 22 players that broke par on day one.  Low Amateurs on the day were West Vancouver’s Dave Rose and Roseland’s Yves Bisson.

Final round action gets underway at 7:30am tomorrow morning with the leaders tee-ing off at 9:54am.

For more information on the Vancouver Golf Tour: