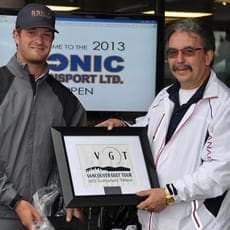 Fresh off his team win at the Peru Invitational Manuel Prado Team Cup with partner Kevin Carrigan, West Vancouver’s David Rose continued his fine play with a round of 68 (-4) in VGT’s Sonic Transport Open.  Even with a 3-putt on the final hole, Rose took home the Overall Title by one shot over West Van’s Stuart Bell and member of the 2010 BC Match Play winning team Kevin Hogg.  All three players struggled with the 1999 Air Canada Championship Sunday pin on the 18th – Rose and Bell both 3-putting and Hogg 4-putting to lose by one.  Rose topped a total of 101 golfers in the field, including 42 players in the Championship Flight (0-5.0).

Rose had a total of 5 birdies and a solo bogey on the day en route to his 2nd VGT Amateur win in as many years.  For Bell it was his second runner-up finish in as many weeks.  This was Hogg’s second near brush at the winner’s circle, being edged out in a 22 hole match at this year’s Canada Bread BC Match Play semi-finals with partner Dave Zibrik.

Rose captures 1,500 points on the Championship Order of Merit as well as a CLEVELAND CLASSIC XL Custom Driver and a commemorative Sonic Transport golf shirt.  Through five events, Rosedale’s Yves Bisson clings to a healthy lead in the CLEVELAND/SRIXON ORDER OF MERIT with 3,550 points, and 1,200 over Coquitlam’s Steven Diack.

Flight A’s event was a close battle between Kamloop’s Amateur Dave Burrows, and North Vancouver’s Brian Baker.  Burrows edged Baker out by a couple of shots due to his very solid play on the back nine, shooting 1 over for a score of 76 gross.  Baker finished with a 78.  The Flight A Order of Merit race is heating up at the top with Shane Jung out on top with just over 4,000 points.

Vancouver’s Jason Boyd stole the show in Flight B with an impressive score of 77, topping all Flight B players by a whopping 7 shots in the gross side of this event!  His 1,500 points climbs him up to 2nd place on the Cleveland/Srixon Order of Merit, just 125 points behind leader Gil Semet.

All 101 Amateurs were treated to a fantastic day of golf at Northview’s Ridge Course.  Course conditions were great, greens running exceptional throughout the day.

All players were greeted at registration with a premium Prodigy hat and over $5,000 in prizes throughout the day, thanks to our Title Sponsor SONIC TRANSPORT.  Our continued thanks go to SONIC TRANSPORT’s owner LES CALDER, who recently signed on as one of VGT’s newest PREMIER PARTNERS!!  Thank-you for helping us with one of our fundamental goals of PREPARING TOMORROW’S CHAMPIONS!  We are very grateful for your support!

Your top 10 VGT Golfers in each Amateur flight through 5 events are listed below:

[/ez_three_last]For a full look at this year’s Tour Championship Results and Order of Merit Standings in each flight CLICK HERE.