Twenty-seven year old Canadian Tour Rookie Nathan Leonhardt of Richmond, BC turned a wild week of travel into a well-deserved win this weekend at VGT’s final event of the 2012 summer schedule.  Leonhardt’s wild journey started off at the Tobiano Pro-am last weekend (where he finished 5th).  He would fly back to the Greater Toronto area the next morning for the Canadian Tour Q-School and tee-it-up the next day in round one.  Let’s just say not an ideal formula for success in 99% of tour pros.  And although this rushed routine didn’t help his cause in round one shooting an opening round of 80, Leonhardt showed his true colors battling back strongly over the next 3 rounds, shooting scores of 68, 70, 71 and finishing 10th to secure full exempt status on the Canadian Tour in 2013.

With Can Tour status in hand, the ‘rookie’ jumped on a late flight home that night back to Vancouver in time for a few hours’ sleep in preparation for the VGT Tour Championship at the newly opened Pagoda Ridge Golf Course the next morning.  Day one went fairly well considering the fatigue he was feeling as he fired an opening round of 69.  This left Leonhardt 3 shots off the lead behind fellow Can Tour Pros Ryan Williams of Vancouver and Matt Daniel of Richmond who opened with rounds of 66.  After a long day in the Pro-am format, dinner and prizing, Leonhardt was long awaiting some needed sleep.

Day two featured 33 of the top Pros in BC as well as another 70 Amateurs competing for the Order of Merit Champion in their own flight.  Leonhardt was out in the 3rd last group of the day.  After a shaky start, bogeying his 5th hole, Leonhardt made good by closing out the day with 7 birdies and an eagle over his next 13 holes.  His final three holes were where he sealed the deal on BC’s newest Premier Championship layout – an eagle-birdie-birdie finish en route to a course record score of 65.

In the final 2 groups it was Ryan Williams and Matt Daniel who were out early with the lead and essentially battling for top spot all the way through 11 holes, Daniel at -9 and Williams at -8.  Langley’s James Allenby on the other hand took till the final 9 to make his charge, shooting a brilliant round of 6-under par 31 on the back 9 to shoot 66 on the day and finish t2nd in the event.

Abbotsford’s Nick Taylor, coming off a nice year on his first full season on the Canadian Tour, looked promising early on in round two, getting it to -8 for the event through 7 holes.  But bogeys on 8, 9 and 15 halted his chances of winning the Championship and he would finish T5th in the event at -6.  His good play on the Canadian Tour and improved performance on the VGT this year however, did earn Taylor the PAINE EDMONDS LAWYERS Most Improved VGT Player Award, a $1,500 prize.

Not sure if it’s something in the water in Abbotsford, but VGT’s other Award Winner this evening was 24 year old Lucas Bogdan, who was recognized as the MARKETPLACE IGA ‘Rookie of the Year’ after his 7th place finish on the Cleveland/Srixon Pro Order of Merit that included 6 top 5 finishes this year.  Bogdan finished T5th in the event thanks to an eagle-par-birdie finish on the closing three holes. 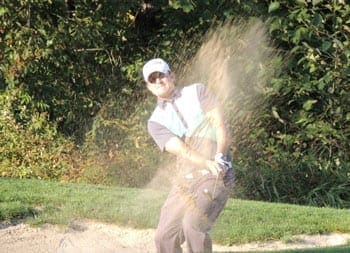 Ultimately it came down to the final 2 holes for our leaders Daniel and Williams to put the squeeze on Leonhardt in an attempt to force a playoff as Leonhardt was posted in the clubhouse at -10.  After a par by Williams and birdie by Daniel on 16, it was Williams at -8 and Daniel at -9 as they approached the 17th green.  Williams had the first look from 20 feet and Daniel from 10’, but both players’ birdie putts slipped by the hole and Leonhardt’s lead was safe for the time being.  Williams would need an eagle to tie and Daniel a birdie if a playoff was to ensue.

After a massive drive and long iron into the 18th, Williams faced a greenside bunker shot he needed to hole-out for the tie.  Daniel on the other hand took his drive up the right side and found himself blocked out from the green.  He would pitch out and hit his 3rd up to the front side of the green.  After both players’ greenside shots failed to enter the cup Nathan Leonhardt was crowned winner of the 2012 WOODLAND GOLF VGT TOUR CHAMPIONSHIP!

On the Amateur side of the Tour Championship, 18 year old Adam Svensson continued his dominant play in Amateur golf on the VGT, winning his 7th VGT event in 7 starts over 2 years.  Exceptional display of golf for this young man who has won 3 national junior titles and one World Junior Championship.  One thing for sure, this young man is going to have a serious career in  golf where and whenever he is ready to turn pro!  Congrats Adam!

For a full look at this year’s Tour Championship Results CLICK HERE.

This weekend was VGT’s first look at BC’s Newest Premier Championship Course PAGODA RIDGE.  All week the players and spectators alike raved about the layout and outstanding conditions of this beautifully designed course by WOODLAND GOLF LTD. “Terry and Scott Woodland and their design team have done an amazing job of constructing, molding and shaping this beautiful property into a gem of a golf course” stated VGT Commissioner Fraser Mulholland.  “The Brown Family should be extremely proud of the outstanding golf course and experience they have created for the golfing public in the Greater Vancouver area” continued Mulholland.  “Our players, staff and fans have been treated to some amazing hospitality from the owners of Pagoda Ridge as well as first class course conditions prepared by Pagoda Ridge Course Superintendent Reed Grosart and his grounds team.  Job extremely well done!!”

Talks are already underway to host VGT’s Tour Championship at Pagoda Ridge in 2013 and to expand the nature of the event into a 54-Hole Championship.  Continued thanks go out to the whole Brown Family and their support staff who rallied around our event and made this year’s VGT Tour Championship one to remember for all involved!  Particular thanks to all the volunteers who came out from both the Pagoda Ridge team as well as the VGT Team who made the weekend an exceptional experience for our players!

Finally, our thanks to all of the sponsors involved in making this year’s VGT Tour Championship a huge success:

We extremely excited about the future of working with Pagoda Ridge Golf Course and all of their partners at next year’s event as well as on our Winter Tour Schedule this year!!

At the end of the evening VGT crowned Order of Merit Champions in each flight.  First off, our continued thanks to all of our host venues on the 2012 VGT Schedule, as well as to the die-hard golfers who are coming out week-in-week-out to play on our tour.  The Tour would not be here without your support!

The 2012 CLEVELAND/SRIXON (VGT) ORDER OF MERIT CHAMPIONS in each flight are listed below.  Congratulations on your outstanding play this year!!

Congratulations to all 2012 Event Winners and Order of Merit Champions on the Vancouver Golf Tour.  It has been a pleasure seeing so much development in both the Amateur and Professional side of our Tour the past 6 years.  We are excited to see where things will be in the next few years with the exceptional standard of golf that is being played on our tour.  Congratulations to all VGT Players who have already gone on to do great things on the Canadian Tour and good luck to the VGT Pros who are heading down to PGA Tour Qualifying School this fall!

Special thanks go out to the loyal and hardworking VGT Team Members who have logged 1000’s of hours on and off the golf course preparing the stage for our local golfers to feel proud of where they play!  The endless hours are appreciated by the players and families of those getting the opportunities to fulfill their dreams and use our tour as a spring board onto major tours!

And a thousand thank-you’s to all of our year-long Sponsors, including our Title Sponsor Marketplace IGA , our Major Partner Sponsor Paine Edmonds and to all supporting partner sponsors of VGT.  Without your belief in what we do and tremendous support that goes with it, VGT would not be where it is today and neither would the player movement we are seeing right here in BC!  You should all be very proud!

And for those who haven’t had enough golf this year, we will be releasing our VGT Winter Tour Schedule and membership program in the next 7-10 days, with our first event been scheduled for the week of Oct.22nd.

Thanks to everyone involved for making this year’s VGT summer schedule a very special one for all of us involved!

PHOTO GALLERY ON FACEBOOK
(View Pictures From Both Days)