Through 9 holes of the final round of the Paine Edmonds Vancouver Open it seemed the only thing that would stop Scott Stiles from winning was himself.  Stiles looked totally in control of his game right from the start, eagling the 2nd and 4th par 5’s and kicking in two more birdies on 5 and 6 to go -6 thru 6 holes.  Turning in 30 on the front pushed Stiles to -12 for the Championship and held a 3-shot lead over Eugene Wong, who was on a bit of a front nine tear himself, shooting 31 (-5).  And even when his playing partner Cory Renfrew started his charge on #9 (with a birdie), then holing out for eagle on 10 and following up with birdies on 11 and 12, Stiles maintained his composure, birdying #11 himself. 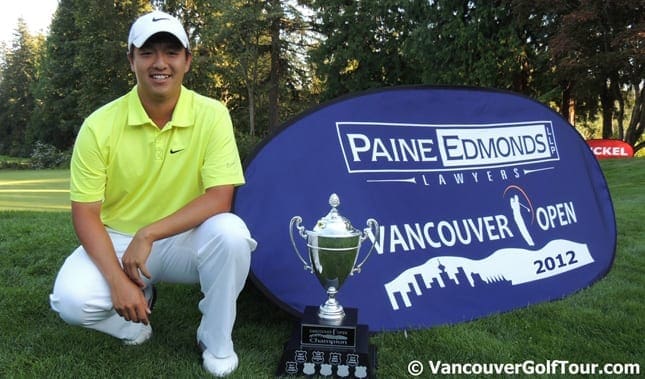 Although through 12 holes Stiles’ lead had disappeared, he didn’t seem to falter as he countered his first bogey of the day on 13 with bounce-back birdies on 14 and 15 to push him to -14.   Meanwhile in his group Renfrew’s charge came to an end when he shoved his iron shot into the greenside pond and proceeded to make triple bogey and slip back to -10 for the tourney and at the time 3 shots back.

While all this was transpiring, Wong was continuing to put the pedal down mounting his own charge from the final group, carding birdies on 11 and 12 to get to -11.  And after bogeying the 13th he rallied back with birdies on 14 and 15 to get to -12 and find himself now only 2 shots back of Stiles.  Now -8 for the day, it looked like it was all lining up for Wong to close with an eagle 3, shoot 62 and wait for a possible playoff if Stiles didn’t birdie #18.  He would hit two incredible shots into 18 and face a 15 footer for eagle that just slipped by on the low side of the hole.  He would post at -13 and watch Stiles come down the 18th fairway at -14.  He would ultimately need a small miracle for Stiles to bogey the 18th to force a playoff, otherwise Stiles would be crowned the champion.

After a perfectly placed drive on the reachable par 5 – 18th at Fraserview, Stiles did the sensible thing and laid up in front of the ravine guarding the green.  The tournament was all but over as all he needed to do was pitch it from just over 100 yards onto the green and 2-putt for the title.  Sounds easy, but after hearing from Stiles himself, there’s no such thing as a sure thing in golf.

Stiles’ ball had laid to rest 115 yards from the pin, which for Stiles was an in between yardage for him between his sand wedge and pitching wedge.  The second factor that made his shot more difficult than the fans surrounding the green would know was his ball rested on the edge of a sanded-over divot.  Add a bit of adrenaline into the mix and the variables at hand, and Stile’s chunked wedge is fairly understandable given the pressure he would have been feeling being in this situation as a pro for the first time.  With the fans (and Wong) in disbelief watching what was going on in front of them, Stiles had to re-compose himself and get it up-and-down for a tie and force a playoff.  His pitch shot would come up a good 15 feet short, and after his put slid past the hole, North Vancouver’s Eugene Wong was crowned ’12 Van Open Champion.

When asked by Vancouver Sun’s Brad Ziemer on Stiles’ devastating finish: “Unbelievable,” Wong said. “I guess that’s golf. I really don’t know what to say.”  “I played well out there,” Wong said. “I knew I had to go low and I did. I feel like I did what I had to do, but it’s tough to see someone finish like that. But I hope down the road it helps Scott become a better player.”

Quoting Vancouver Sun reporter Brad Ziemer, “As easy as it might be to say Wong was handed the title, it’s really not as simple as that.  Almost lost amid the devastation of Stiles’ tough finish was the fact that Wong fired a nine-under 63 in the final round of the Vancouver Golf Tour’s marquee event”.

Wong’s final round consisted of 8 birdies, an eagle and one bogey en route to a competitive course record at Fraserview from the Gold Tees.  Richmond’s Matt Daniel set a new course record mark from the blue tees in the Saputo Charity Pro-am with an 11-under par 61.

The Vancouver Open continued to showcase a bit of drama for the fans when amateurs Adam Svensson and Brendan Dillon sat in the clubhouse tied at -1 for the Overall Amateur Champion.  With Dave Rose also at -1 thru 53 holes they were waiting for him to finish and see if their score would hold on for a playoff.  Rose’s 3rd shot hit into the 18th green and spun 35 feet from the hole, and led to a 3-putt that would cost him a chance at the Amateur playoff.

After some less than spectacular play in the 1st playoff hole (both players made bogey), Svensson took advantage on the 2nd time down 18 and made a great shot into the par 5 and two putted for birdie and his 2nd straight Amateur Champion Title at the Open.

While Svensson claimed the Overall Amateur Title, it was Whistler’s Tomohiro Sekiya who claimed Overall Net honors.  Both players received an Acer Aspire Notebook and some Travis Matthew prizes for their wins!

At the conclusion of the Van Open trophy presentation, VGT honored two players that won the CLEVELAND/SRIXON Order of Merit Prizes for Q-School.  After Order of Merit Leader Bryn Parry declined the Q-School Entry fee prize a couple of weeks ago due to personal reasons, this left the two prizes up for grabs for another 10 VGT players who were in the mix at the start of the Vancouver Open.  This story within the tournament came down to the wire with the PGA Tour Q-School prize (approx. $5,000 value) being awarded to Ryan Williams and the 2nd place European Q-School Entry ($2,200 value) being won by Nick Taylor, ousting Langley’s Adam Cornelson by less than 200 points (one stroke in the event).  Congratulations to both golfers on their great play on the VGT and Canadian Tour this year.  We will be cheering you and a number of other VGT players on this fall!!!

The 2012 Paine Edmonds Vancouver Open was hosted by Vancouver Parks Board for the 4th straight year.  Each and every one of the Vancouver Parks Golf maintenance staff should be recognized for the absolutely amazing conditions of all 3 golf courses during the week of the event.  Thank-you Mike Ferdinandi, Jeff McClean and Stan Dixon for doing a superb job on presenting all 3 courses in perfect tournament conditions!  Our hats go off to each and every team member at all 3 golf courses for supporting our Van Open team in the execution of this year’s event.  All 216 competitive players and 130 Pro-am players were treated to exceptional service and outstanding food and beverage throughout the event.  Thank-you for supporting our requirements and helping make our event what it is today!

The 2012 Paine Edmonds Open has been receiving some amazing feedback via email, twitter and facebook and we have many others to thank for being a huge part of this group effort.

The list is long and too many to mention each and every one individually, but I would like to take this time to thank all of our great sponsors, in particular our Title Sponsor Paine Edmonds Lawyers and Presenting Sponsor Augusta Resource Corp. and our Charity Pro-am sponsor Saputo, who stepped up their roles in the event this year.  Your support has been invaluable in our mission of preparing golfers as well helping us raise significant funds for the First Tee Program Charity.  We thank-you for believing in VGT and what the Vancouver Open accomplishes for the Professional and Amateur golfers here in Vancouver.  We truly are Preparing Tomorrow’s Champions!

Thanks to a late cry for help from BC Golf, we had an amazing outpouring of support from golf enthusiasts who came out in droves to help us conduct this year’s Championship!  This new found volunteer team, coupled with our long-time McCleery Ladies Club supporters made this year’s Vancouver Open by far the most enjoyable tournament in its short history for all players to play!  We are eternally in your debt for your service!

Tireless hours and sleepless nights.  That’s how I would describe the last 6 days for our trusted team members.  Thank-you all for putting up with my ‘evil eye’ or ‘head scratching look’ when asked ‘where is this…..who’s doing that?’  You have all poured your heart and soul into this great event and it shows!!  Congrats to all of you (Mike West, Holly Pearson, Heidi Tran, Ray Porter, Bill Schabes, Brian Small, George Sterling) for being an integral part of this year’s event!

We hope all players and fans had an enjoyable experience at this year’s Vancouver Open.  We look forward to setting the bar even higher in 2013!!

PHOTO GALLERY ON FACEBOOK
(View Pictures from All 3 Days)