Congratulations are in order to all 31 teams that made it through the qualifying weekend of this year’s CANADA BREAD BC MATCH PLAY TEAM QUALIFYING!  A total of 68 teams were vying for a chance to play over the NEXT 3 WEEKS to see who will knock off last year’s winners (Josh Taylor / Kevin Stinson) to be crowned the 2012 BC MATCH PLAY CHAMPIONS! 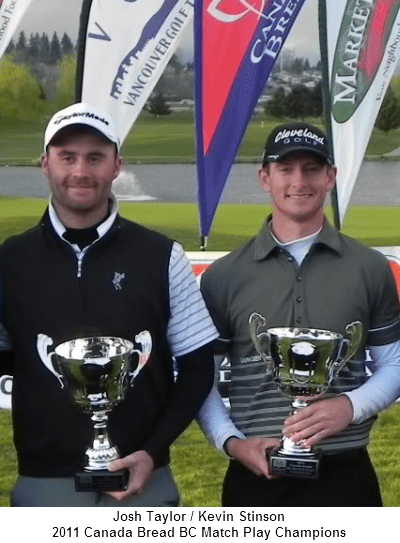 Saturday’s qualifying team’s endured torrential rains at both Hazelmere and Ledgeview, and had it not been for VGT’s George Sterling and Hazelmere Pro-shop’s Graham Ogden and his hard working assistants Wade and Tyler, this weekend’s qualifier would have been a wash out!  Thanks to their incredible efforts around the greens, squeegying and rolling the water away on several troubled holes, the qualifier at Hazelmere continued under very difficult, but playable conditions.  At the end of the day it was two seasoned VGT Professionals Matt Daniel and Matt Makinson who shared Low Qualifying honours with two local Amateurs Callum Robinson and his partner Javen Shalk, carding a better-ball score of 67 (-5).  A total of 10 teams qualified out of 22 teams at this location, including the only co-gender team of Professionals John Shin and Sylvia Park, who needed a one-hole playoff the next morning to advance to the Match Play Draw!

At Ledgeview, the rain teamed down most of the day barring the final hour of play, and some amazing scores were posted considering the difficulty of the conditions.  Leading the way from the Ledgeview qualifier were local Professionals Brett Webster and Lucas Bogdan who are no strangers to the Abbotsford track, carding a better ball score of 62 (-8).  Only one shot back were two teams including Squamish based Professionals Scott Sellers and Bryon Thom as well as the team of (Professional) Chris Wood and (Amateur) Chris Kobler.  At the end of the day it took a score of -2 to advance to the Match Play round from this site, which included 9 out of the 20 teams competing.  Two shockers to not advance were the team of Chilliwack Professional Jared Rempel / Danny Hebert and 2007 Champions Dan Swanson / Richard Kellington, who both missed a playoff by one shot!

On Sunday, the rains subsided and a glimpse of sunshine blessed the 26 teams registered at McCleery Golf Course.  Scoring conditions were ideal as the typical one-club wind seen at McCleery was no-where to be seen and greens were both receptive and in great shape!  When it was all said and done, a total of 12 teams advanced into the Match Play Draw, including Low Qualifying Team of Stu Dunaway / Yves Bisson who carded an impressive better-ball score of 62 (-9).  Regulars in this event, Dunaway and Bisson have paired up for the last 8 years, advancing to the finals in 2009 before bowing out to Professionals Mark Burke and Mewail Kidane.  They will head into the Opening Round of the Match Play Draw as the #2 seed, which gets underway this Saturday at the Sandpiper Golf Resort in Harrison, BC.  They will have their work cut out for them as they face a tough first round Professional duo of Jeremy Paradis and Clark MacPherson who narrowly qualified at Hazelmere and head into the match play as an unexpectedly high 31st seed!

STORY OF THE QUALIFYING WEEKEND:

At the conclusion of regulation play, five teams were in a log-jam for the last 3 qualifying spots at McCleery, and would commence in what would be the longest playoff in BC MATCH PLAY QUALIFYING history!  After the teams of Steve Jenkins/ Steve Savage and Connor Richey / Jesse Ostrosky birdied the 2nd hole to advance, it left 3 teams remaining to battle it out for the final spot.  With daylight dwindling, the committee decided to bring the 3rd playoff hole back to the 150 yard marker on the 2nd fairway at McCleery to see if a winner could be decided.  Not to be, as all teams missed birdie chances.  With darkness closing in, and the only saving grace being the streaming lights from McCleery’s practice range, all players agreed to continue on from the forward tees on hole 3 for a best look at the hole.  Still no winner!  A 5th playoff hole at the same tee resulted in one more team bowing out with team bogeys.  Once again, all players were questioned of their willingness to continue or come back on another day to complete the playoff……Everyone insisted on finishing THIS NIGHT!  It would take 4 more holes for a total of 9 playoff holes to determine a winner, and we congratulate all players (Adam Tulk / Kyle Williams) and our final qualifying team of Jeff Debou / Thomas Petts who endured the conditions and made a great birdie for the eventual win!!!

A full list of the FIRST ROUND MATCHES as well as future match sites and possible pairings are enclosed below.

We welcome all spectators to come out and watch some of Western Canadian’s Top Professionals and Amateurs battle it out the next three weeks!!!  Admission is by donation to the FIRST TEE PROGRAM of Greater Vancouver!!