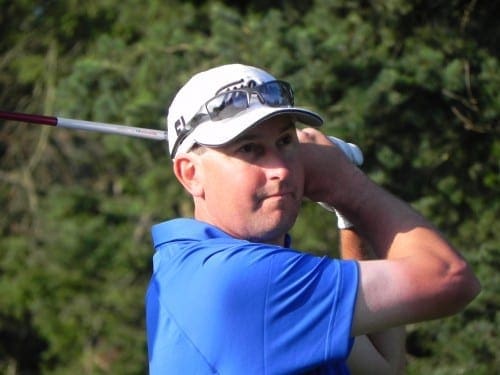 Dominating the local scene for the past five years (’08-’10 VGT Order of Merit Winner & PGA of BC Player of the Year in same 3-year stretch), Bryn Parry showed his game can stand up to the best in the country this week at the Quebec PGA’s $150,000 ROGERS CANADA CUP Presented by VIA RAIL.  The 39 year old PLAYERS’ ACADEMY (N. Vancouver) Teaching Professional withstood all 155 challengers over 72 holes to earn a $30,000 first place winners’ cheque, his second biggest cheque of his career.  The $30,000 cash will go a long way to boost his confidence leading into the remainder of his schedule, which will be capped off with a trip to PGA Tour Qualifying School this fall.

At the beginning of the final round, Parry sat at 6-under par and 3 shots off the lead behind Ontario Professional John McCann.  Quebec PGA Professional Kevin Senecal and Vancouver Golf Club Pro Mark Strong started the day one and two shots back of McCann respectively.

But by the turn it was the other Senecal who had vaulted to the top of the board, going out in 2-under par 34 to get to -10 and a three shot lead over Strong.  While John McCann struggled on the front nine, it was another McCann (Brian) who was making a move a few groups ahead, pushing it to -9 thru 14.  McCann would close with another birdie on 15 and finish the tournament at -10, good for a tie for 2nd and a $13,675 second place cheque.

The back nine became a race to see who could take the title.  John McCann would make a small charge of his own, battling back from -4 at the turn and would shoot 33 on the back nine to finish in 4th place alone at -7.  And Mark Strong would have his biggest tournament experience of his career, playing in the final group of this huge event where a few thousand fans would congregate to watch over the weekend.  Strong held his own on the final day, shooting a respectable round of 73 to finish 5th on his own and collect the biggest professional cheque of his career ($5,950).

The back nine drama started with an impressive birdie by Parry on the 205 yard par three 10th to get to -9, then after a bogey on 13, he would hit what was certainly “The shot of the tournament”.  With the pin tucked behind the front bunker and water guarding the right side of the green, Parry hit the purest soaring 5-iron from 205 yards to 5 feet from the stick.  As they would say in Quebec, C’EST FORMIDABLE!!!!  He would drain his putt for the eagle and move to -10 for the tourney.  On holes 15 and 16, Parry would continue to pepper the flagstick, but would leave both par 4’s with pars as his birdie tries edged by the cup.

One hole back, Senecal would miss a crucial birdie effort from 10 feet on 14, but kept the foot down and made a clutch birdie on 15 to go -11 and hold a one shot lead over Parry and Brian McCann.  This would be short lived however, as Parry now on the short par three 17th, sized up a 20-footer from across the green.  The putt would take both perfect line and speed to go in, up the slope and then down the slope, veering to the right with about 2 feet of break. And it went down for the birdie!  The gallery that had swelled behind the green erupted and Parry was back in a tie at the top at -11. Can you say CLUTCH??

Keeping composed, Parry sent his 3-metal solidly down the right side of the fairway into perfect shape for his approach to the 18th.  A big gust of wind had come up on the last hole just as Parry putted, and it was only getting stronger on this closing hole.  Club selection would be critical here. Parry’s short iron from 155 sailed a bit left, but stayed the course and hopped to the back left portion of the green about 35 feet from the pin.  Back on 17, Senecal’s tee-shot drifted ever so slightly right of the flag, and ended up short and in the green-side bunker.  Short siding himself on his tee-shot cost him dearly as he would bogey this hole and find himself one shot back of Parry standing on the 18th tee.

Back on the 18th green, Parry, not totally aware of his position, rolled his 35 footer confidently down the slope as if he needed it for the win.  The ball veered past the cup and wouldn’t stop till it was about 4 feet past the hole.  He would then finish out in style, rolling in his putt for par and closing his round out at -5 (67) for the day and a tournament total of -11, guaranteeing him at worst a 2nd place finish.

Only one man could decide his fate, and the Quebec PGA pro did his finest to put this event into sudden death, hitting it to 15 feet on the 18th green in front of a massive gallery waiting for the final putt to be holed.  Senecal’s putt would come ever-so-close to entering the cup, but would lip-out in dramatic fashion to give Bryn Parry the 2011 Canada Cup Title!

All in all, the 2011 Canada Cup was one of the most impressively organized golf tournaments I have been a participant of or a spectator at.  Quebec PGA Commissioner Jean Trudeau and all of his staff and team of volunteers should be commended on their absolutely first class event.  They really know how to put on a show and they couldn’t have picked a better venue with the Valle De Richelleux Golf Club.  It is amazing to see the support they have from the Quebec Golf community and they have definitely earned it through the professional development of the Quebec PGA Tour!

Congratulations to all the VGT and PGA of BC Professionals who played so well to make it to the weekend.  The standard of play out west was certainly shown in all of your finishes this week!!

Once again, we pass along our congratulations to a very deserving 2011 CANADA CUP Champion BRYN PARRY!!!