Story courtesy of Scott Pritchard of the Canadian Tour.

(Vancouver, BC., July 23, 2011) – Canadian Tour Member Adam Hadwin sits one shot off the lead at the RBC Canadian Open after firing a 2-under-par 68 in the third round. The Abbottsford, BC native will be looking to become the first Canadian to with the Canadian Open since Pat Fletcher accomplished the seemingly rare feat in 1954. Hadwin will be joined in the final group with leader Bo Van Pelt (USA) and Andres Romero (Argentina) who sits one shot behind Hadwin at 3-under-par.

Hadwin got off to a quick start today at Shaughnessy posting birdies on holes one, two and four to grab the lead alone at 5-under-par.  The 23-year-old two time Canadian Tour winner cooled off a bit after posting bogeys on holes five and eight before turning at 1-under for his round and 3-under for the tournament.

“Getting off to a start like I did helped settled the nerves quickly knowing I basically had a three shot cushion,” commented Hadwin on his quick start to the round. “It was a good solid round, I hit a lot of good shots and picked my targets with my caddie appropriately,” added Hadwin who is joined this week by his golf coach Brett Saunders as his caddie.

Hadwin seems to be taking everything in stride and pulling off the shots that are needed to win at the highest level. The 2010 Rivermead Trophy Winner at the 2010 RBC Canadian Open told the media room following his round that he thinks he has the game to win and hopes to do so come tomorrow.

“We know if we post another 68, we’ve got a good chance of winning,” said a confident Hadwin. “We just have to go out and do the same thing we’ve been doing all week,” added Hadwin, whose friends and family have joined him at the RBC Canadian Open for support. 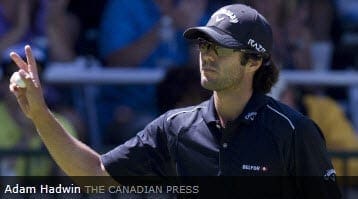 Bo Van Pelt had the round of the day at the RBC Canadian Open firing a 5-under-par 65 that was highlighted by a 29 on the back side of Shaughnessy Golf & Country Club.  Van Pelt will be looking to clinch his second PGA TOUR win since he won in 2009 at Milwaukee.

Andres Romero will join Van Pelt and Hadwin in the final pairing and will be looking for his second PGA TOUR win since claiming the 2008 Zurich Classic of New Orleans. Romero has made just over $630,000 on the PGA TOUR so far this season and has two top 10 finishes.

Canadian Tour members Dustin Risdon and Brad Fritsch both struggled on day three of the Canadian Open. Fritsch posted his worse round in some time posting a 10-over-par 80 on the unforgiving Shaughnessy.  Fritsch, who grew up in Ottawa, made two birdies, six bogeys and three doubles to drop 43 spots on the leaderboard.

Risdon on the other hand posted a third round 76 and only fell three spots on the leaderboard. The Strathmore, AB native made only one birdie on his round and will be looking to bounce back tomorrow. Risdon and Fritsch will play together tomorrow along with Frank Lickliter from the 10th tee at 9:30am.